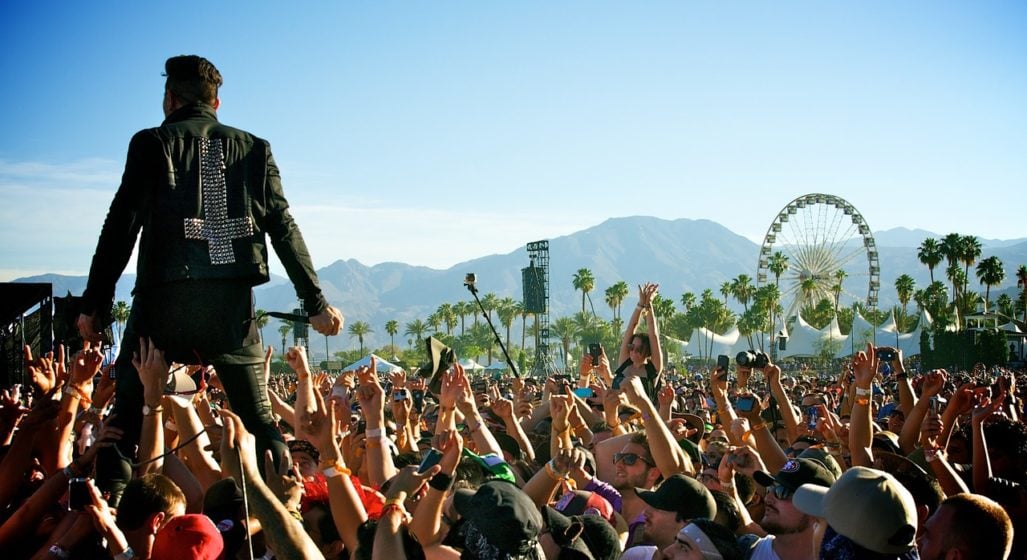 The Coachella Valley Music and Arts Festival or ‘Coachella’ as it’s best known is fast approaching. Located in the Californian desert near Palm Springs at the Empire Polo Club in Indio and spread out over 2 weekends in April, the festival is one of the largest, most famous and popular music festivals in the United States. Starting back in 1999, Coachella has grown in size every year and 2014 saw 579,000 punters through the gates, bringing in almost $80 million.

There are many, many, many reasons to go to Coachella, just speak to anyone who has been before. Here are some of the best reasons to go in case you needed any more convincing:

Set over the lush green sprawling Empire Polo Club, but in the middle of the Californian Desert. It truly is an oasis in the desert. Coachella is a 45 minute drive from Palm Springs and a two hour drive from Los Angeles. The remote location of Coachella lends itself to very warm weather, magic sunsets and generally balmy evenings. A perfect combination for festival which attracts 100,000 people a day.

Hot sunny days which allow you to roam freely in a singlet, shorts and funky hat. There are no troubles with worrying about what to wear, wether to pack an umbrella, a rain coat or gumboots. Your only worry at Coachella is that there is no dust storm, like what rolled through in 2014. Then again it’s all part of the experience.

Coachella attracts a wide range of punters, the beautiful people, the celebrities, the weird and wonderful, the trippers and families with young kids wearing ear muffs. There are all sorts of characters at Coachella and most are more than keen to stop for a chat and spread the love. It’s not the hippy festival that Woodstock was but there is plenty of love in the air

Each year the line-up announcement for Coachella is one of the most eagerly anticipated parts of the experience. With something for everyone from the biggest names in modern music, the veteran performers with the back catalogues, the indie darlings, the hip hop gangsters, the club DJ’s, all tastes are catered for at Coachella. Past performers include; Daft Punk, The Strokes, Beastie Boys, Muse, Madonna, The Cure, Kanye West, Eminem, Rage Against the Machine, Prince, Paul McCartney, Radiohead. This year’s line-up includes AC/DC, Drake, Florence and the Machine, Jack White amongst many, many, many more.

Californian sun, banging tunes, friendly people and a great layout all lends itself to a killer vibe. Everyone is there to have a good time and you can feel it. Sit back, relax, and let the good times roll.

Last year’s Coachella saw a raft of special guest appearances during sets. Blondie performed with Arcade Fire, Pharrel Williams rolled out Gwen Stefani, Nelly and Snoop Dogg to sing vocals in tracks featuring themselves. MGMT and Kid Cudi traded guest spots during each other sets. Jay Z appeared with Nas to bury the hatchet on their previously long running feud. Even Tupac appeared in 2012 performing Snoop Dogg via Hologram. It’s not just the headline acts you can expect to see if you’re lucky.

Given its relatively remote location, getting to Coachella is going to involve some form of kick ass trip. Whether you fly in from Vegas on a private jet, drive from LA, catch the festival bus from Palm Springs, fly cross country from New York and the East Coast or make the long trip from Australia. It’s going to be memorable.

Coachella caters for all levels of punters. There is a huge camp ground attached to the festival and many tickets come with a camping pass. If you fancy being in the thick of the action for the whole three days and being able to come and go to see your favourite artists and back to the Camp Grounds, then the camping ticket is for you. If you like the thought of trekking home on the shuttle bus home each night to a clean hotel bed and a pool, then there is a wide range of hip hotels in Palm Springs which have before and after parties to keep your vibe going.

Anything goes at Coachella. You could wear a full tuxedo, your footy shorts and jumper, even your speedos and you wouldn’t look at of place. There is no shortage of women wearing an amazing array of fashion to keep you engaged across the three days. Enjoy the show.

One thing is guaranteed across the three days, you will drink enough beers, see enough music, talk to enough people to create some cracking tales. From missing the bus and hitchhiking home with a mini bus full of college girls, to the hippy Californian couple who end up inviting you to their wedding, to dancing in the general admin with Leonardo DiCaprio, you will bring back some stories.

OK, now get on with booking your tickets, you don’t have much time.