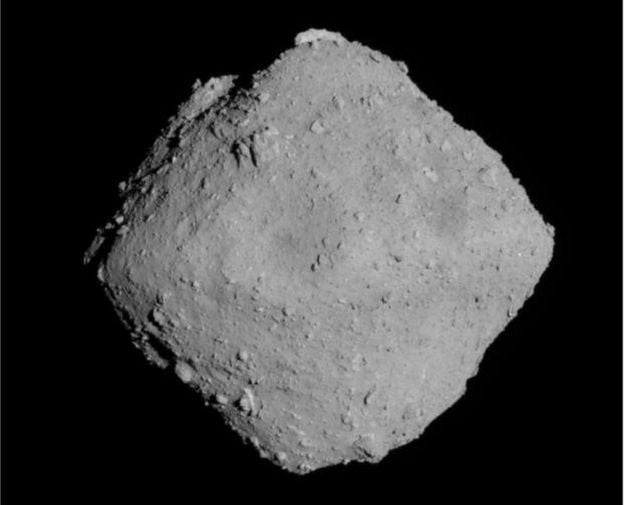 Japanese space agency JAXA has made history by not only successfully landing a vehicle on an asteroid but also transmitting pictures taken on its surface by its rovers back to Earth.

The spacecraft, Hayabusa-2, launched the vehicle onto the 1-kilometre wide space rock last week, deploying two small rovers to explore the asteroid’s surface for the first time ever.

We are sorry we have kept you waiting! MINERVA-II1 consists of two rovers, 1a & 1b. Both rovers are confirmed to have landed on the surface of Ryugu. They are in good condition and have transmitted photos & data. We also confirmed they are moving on the surface. #asteroidlanding

The capsule containing the rovers was released about 60 metres above the rock’s surface with the rock’s low gravity level pulling the 3.3kg science package known as Minerva II-1 to the ground. The two rovers were then jettisoned to different parts of the surface and are able to move by using its gravity to ‘hop’ around the asteroid’s surface.

It took three and a half years for the spacecraft to reach the flying space rock known as Ryugu, which it finally made contact with in June of this year. While it’s not the first time a spacecraft has made such a landing – the European Space Agency has made linked up with an icy comet previously – it is the first time that rovers have been equipped to explore the asteroid and transmit temperatures and images back to Earth.

This is a picture from MINERVA-II1. The color photo was captured by Rover-1A on September 21 around 13:08 JST, immediately after separation from the spacecraft. Hayabusa2 is top and Ryugu's surface is below. The image is blurred because the rover is spinning. #asteroidlanding pic.twitter.com/CeeI5ZjgmM

This dynamic photo was captured by Rover-1A on September 22 at around 11:44 JST. It was taken on Ryugu's surface during a hop. The left-half is the surface of Ryugu, while the white region on the right is due to sunlight. (Hayabusa2 Project) pic.twitter.com/IQLsFd4gJu

The next stage of the mission includes capturing rock from the surface and then detonating an explosive charge to gain access to layers of soil that have yet to be affected by the harsh environment of space. Spacecraft Hayabusa-2 is scheduled to leave the asteroid in December 2019 with the hope it’ll return to Earth in 2020, asteroid samples in tow.