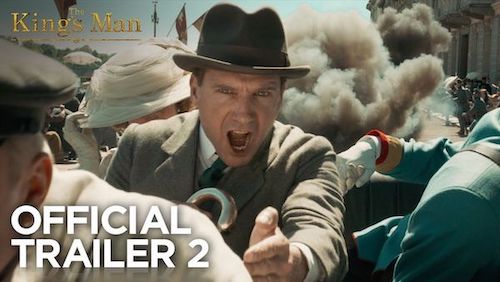 The second full-length trailer for Kingsmen: The Secret Service prequel The Kings Man sheds more light on the ancient society’s beginnings while ramping up the action.

The third film in the franchise stars Ralph Fiennes as Duke of Oxford, the man responsible for forming the covert intelligence agency known as Kingsmen. Recruiting war hero Conrad (Harris Dickinson) to join his team – that also includes Shola (Djimon Hounsou) and fellow agent Polly (Gemma Arterton) – the four must take down the mad Russian Rasputin (Rhys Ifans), a mysterious figure who deals in the occult and has a powerful sway over the Russian Royal Family.

Check out the new poster for The King’s Man, in theatres everywhere February 14, 2020. Watch the trailer now: https://t.co/lXRFjWvXLI pic.twitter.com/B15oO1RMV3

Soundtracked by the Black Sabbath classic “War Pigs,” the trailer promises an absorbing plot and edge of your seat action. It also seems like the film will feature a number of real-life historical figures intertwined with creator Matthew Vaughn’s original script.

The Kings Man is set for release February 14, 2020, but until then check out the trailer below.

RELATED: The full length trailer for ‘The Irishman’ is finally here