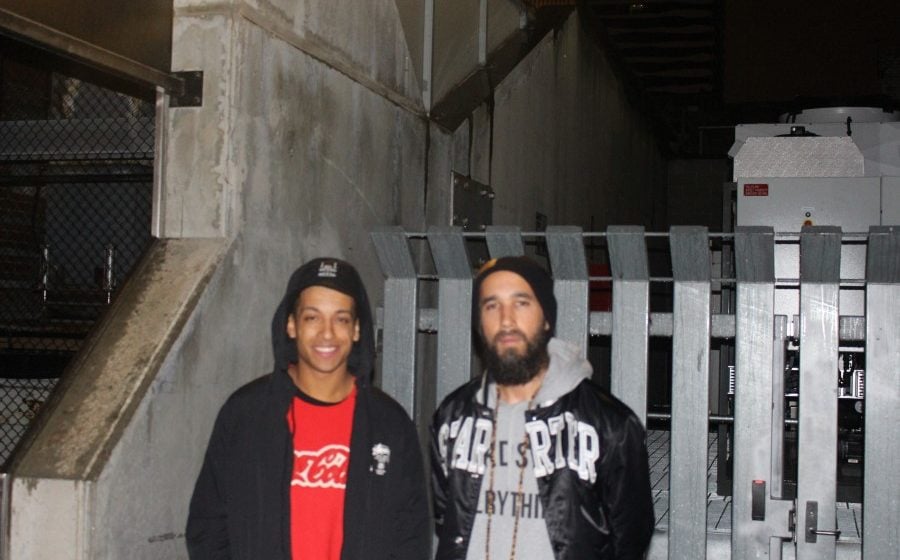 Continuing on a profile on some up and coming Australian rappers, we talk to Nigerian-Australian rapper Remi Kolawole, or REMI. Releasing his album Raw x Infinity last year independently to much critical acclaim, including a Rolling Stone Award and Triple J best album of the year nomination, REMI then pursued a hectic tour schedule including places like Europe and North America as well as Australia. He talks about how REMI came to be, the experiences of touring and how the Australian hip hop scene fits in the global context.

You’ve got your producers Sensible J and Dutch, how did you all come together?

I worked at General Pants with J’s lady, who’s one of my very good friends. I had been working with her for about 2 years before I started kicking it with J. I started rapping and she said that her man (Sensible J) makes beats, so then I kinda hustled my way into their house. That’s how its been every since then and that was four and a half years ago.

You guys have got a group mentality when it comes to the music. How’s the collaboration? Are the beats being made first and your rapping or are you writing lyrics with Sensible and Dutch making the instrumental around that?

Its pretty organic, so it can go either way if you know what I mean. Especially this record will be more me writing away from the music to focus on the lyrics then take it to the music and shift it around. But before that J and Dutch had been making beats way before I’d even started rapping so they had so many beat lined up that it seemed ridiculous to not be writing to instrumentals. So yeah, it very organic and with the group mentality I feel that’s the whole House Of Beige {the independent record label Remi is signed to) movement that we’ve got going on. We move more as a unit and no matter who’s name is on the title we’re all apart of it. One of our guys, Hau, who is from Koolism and the Triple J Hip Hop show just dropped a track with J. So everyone’s is just coming in and helping out.

Across your songs you have boastful uproar in lyrics like Tyson and tracks that have a deeper message like Ode to Ignorane. How do you find a balance between the boastful and the deeper message?

I think that’s just hip hop man, (in relation) to all the artists I’m fans of. From current dudes like Kendrick with the perfect example in his new album To Pimp a Butterfly.It looks at the level of conscious as well as the usual rap shit. (It also relates) to much older artists like Common, Mos Def who are able to interject amazing lines which are funny and hilarious which are like beating yourself up and is the nature of rap. Then on the flipside making sure your always speaking to the people.

Speaking of Mos Def, you recently visited Brooklyn. How was that for you?

We were actually only there for about 2 days. We were there doing music/ business kind of stuff. I guess, the coolest American thing that we did was when we watched a Brooklyn Nets game. Hopefully we can get back there later in the year to do some more hip hop stuff. But to be fair there’s a lot of places where my favourite artists talk about which are mad hood spots that I don’t want to go to.

So New York is the home of the Beast Coast movement. The movement includes Joey Bada$$ who you’ve toured with and has a similar sound to you. Any chance of a link up there?

I’m not sure about a link up, but all I can say is that I’m a fan of what he does. If he plays his cards right he could be the next Jay-Z. Talking to that guy he’s not young mentally. Anyone who turned down a record deal at 17 to do their own thing is on another level. There’s a lot of respect there.

You were also over there for SXSW which is a massive deal for an Australian rapper. Were the Americans accepting or dismissive?

Yeah actually, we didn’t have any haters whatsoever. In the States, trap (a trending subgenre of hip hop) is a very big thing and that was very obvious while we were over there. So that meant at South West we were in our own lane. It’s not that we didn’t have competition or were better than others, but we were separate from everything else. I think it’s the same situation for Joey Bada$$ and a lot new artist who was doing something different to trap just because it was really oversaturated while we there. It was good people took as something new and different as opposed to competition. If we were there in the 90s there might be some issues because of all of the classics.

Speaking of trap, you follow Travi$ Scott on Instagram. You guys seem to have two completely different sounds. What’s going on there?

To be honest, I follow anyone who’s in Kanye’s circle. I like to see what he’s doing and what he’s doing with new rappers. He ‘s one of the few rappers that take care of every level of their protege. It’s also to keep up with what’s happening in hip hop. I mean, I follow Q-Tip on Instagram and he never posts anything, but I follow him just in case something happens. It’s more about love for the whole scene rather than just my favorite rappers.

You also toured Europe last year. How does that compare to America?

It’s completely different but it’s awesome. We went back to the UK this year and I was super excited about that. Then were back touring around Australia for 3 weeks, then were going to be touring around Europe for another 2 and a half months, just moving around doing festivals. So yeah, I’m very excited for that.

Compared to other Australian rappers you seem to be doing the most touring. What’s the reason you being so well received globally?

I don’t know if that’s necessarily a good thing. We just visited the UK and the States and we head off to Europe again. There’s a lot of music to do in between the travelling. In terms of reception, just touring around even Australia in general we seem to be a hotspot for people to be looking at. I feel we got in at the right time and there’s a lot of incredible artists. From people like Courtney Barnett who was on Ellen to people like Hiatus Kayote who were nominated for a Grammy. It’s all part of a movement that people are going to be paying attention to.

In this day and age, do you think it’s fair that any new artist in Australia is seemingly labelled as a local version of an American or international artist?

I think people always compare. I mean I’ve been compared to Wiz Khalifa. People just compare you to their favourites and that wont change.

In terms of the general scene, the up and comers seem to be more multi-cultural and more representative of the population. Is hip hop beginning to represent the true Australia?

I think the music scene is so young that it’s kind of got to that next evolution stage. Aussie hip hop is so young compared to American hip hop, our land is so long compared to the rest of the world. Us coming through now is just that our evolution is taking time. From that, we don’t have as many outlets as we should for alternative music. Hip hop is going through a change and people are accepting that, and I hope to see that across all genres. There are heaps of talented artists who are world class and who are not getting enough exposure so hopefully that comes through.

Does being with an independent label help you with that?

Yeah, doing the independent grind is way harder but it’s definitely worth it if your trying to keep your creativity. We’re sort of small out here but you get to a level in any music scene where you know everyone so there’s no need to be attached to a major label.

You dropped your deluxe album Raw x Infinity here and in the US. It includes extras like bonus tracks and instrumentals. Are you expecting some remixes or samples? How was it to get the album pressed into vinyl?

I’d be excited to see that. Anyone who shows love for Sensible J’s music I’m all about. I mean, I’ve already sold and put it out so I can’t really make any more money off it. Getting the vinyl was better than any reward we ever got. When we got the test presses back that was the coolest. We got it late last year and that was the coolest thing that happened last year. I don’t think we’ll put the deluxe on the vinyls but we’ll see how everything goes down. It’s more likely were going to have new music coming through.

You dropped the free mixtape Call It What You Want. What has evolved apart from the lyrics since your last drop?

My awareness has gone up a bit. Going to Europe last year I noticed our news was mad bias, working towards whatever corporation it was looking at. I saw BBC world news and saw so much stuff that we don’t see that the norm over there. I felt like I wanted to be more aware that was going on. I feel that when I tour the world that I need to speak for the world. There’s a lot of issues that resonate with people everywhere. On top of that it’s a darker album. We’ve really taken our time with it to make sure that we present the record the right way.