Ross Kemp: What It’s Really Like On The Front Line 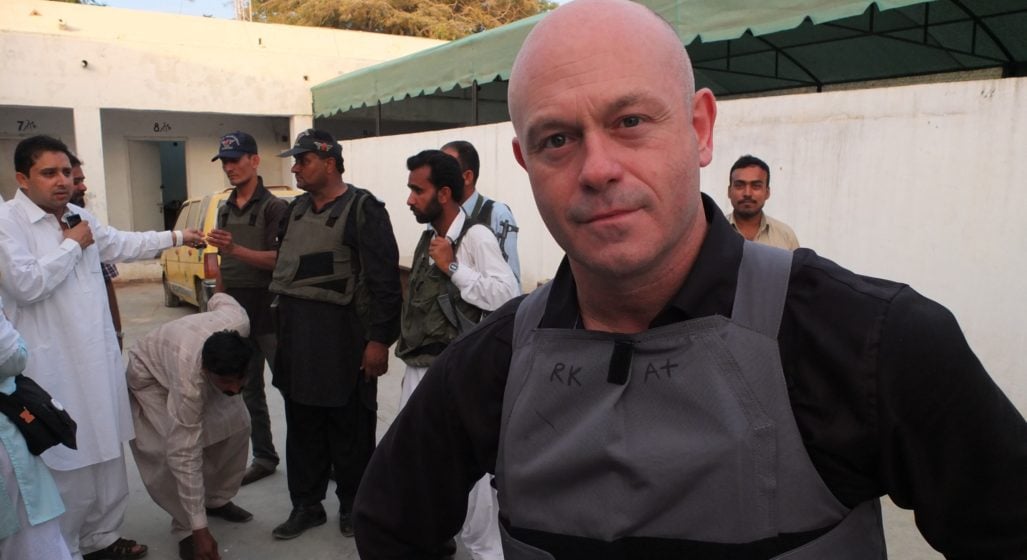 Brit actor turned prolific documentarian Ross Kemp has ventured to the most war-torn and crime-ravaged places to faithfully produce stories of those living on the frontline. Kemp meets me in the sun-burnished lobby of the palatial Four Seasons Hotel located in the historic Rocks area of Sydney.

We begin by discussing the origins of his documentary work, as with now over seventy documentaries to his name, it might seem that Kemp was always destined for this vocation. Though at the tail-end of his time playing Grant Mitchell on beloved soapie EastEnders that didn’t seem the natural progression of things.

‘It was a complete fluke,’ he confides with a chuckle. After his role finished up with the show, Kemp was approached with the offer of hosting a documentary. ‘It was called Lethal Attraction, and it was about America’s relationship with guns and the second amendment.’ A couple of weeks later, Kemp was roaming through some of South Central Los Angeles gang-controlled areas. It was there that he found himself at odds with the some of the crew.

‘The director and the producer wanted to leave well before it got dark, but I decided to stay.’ Kemp ended up staying at the home of the leader of the local Bloods gang. ‘We talked most of the night about the riots and where he lived, and he was a very bright man. Thankfully, he became a community worker and he’s no longer in the Bloods.’

Thus, launched Ross Kemp On Gangs, a series that would span twenty-seven episodes and feature every gang in which Kemp and his team could locate. ‘We looked out for whatever was going on in the world. If there was conflict, if there was poverty, there would be gangs, so we would go there. Whether it was a tribal gang or ones based on criminality, if they wanted to meet with us, we wanted to meet with them.’

Kemp attributes the series’ immense success to working with like-minded people in producing true, unvarnished accounts of situations from some of the most unknown or overlooked, locations around the world. ‘I love to act, but acting is an individual sport, but with a documentary, you have a talented team that stay together and know each other really well and it became more than just a job.’

Still, even the most experienced of journalists have themselves tested from time to time. While interviewing a group in Papa New Guinea, one of the masked men began brandishing a rifle directly in Kemp’s face. The Briton maintained his cool throughout, knocking the gun away and, in no kind words, convinced the gunman to reconsider whatever he had planned.

Even though Kemp appears calm throughout the exchange, he insists that this was not the case. ‘I wasn’t. Obviously the more time you spend in hostile environments, the better you get at trying to judge a situation, but I could’ve judged it wrong.’

Despite the deadly threat Kemp faced there, he reveals another story that left him feeling truly shaken. During the making of an episode for Extreme World that focused on those struggling below the poverty line in Glasgow, Kemp encountered one man whose alcoholism had resulted in him losing several toes. ‘That was just shocking, him having gotten into that position because of his drinking was so sad. A lot of us could end up in such a situation for making mistakes.’

The tough times endured have never stopped Kemp from continuing to make docos. He spent last week with the Armed British forces as part of his latest, following these elite units as they carry out field exercises in constant preparation for terror attacks. ‘I was with them as they chain-sawed doors off and went in with weapons akimbo.’

The documentarian wanted to investigate if there is a sufficient amount of armed officers to tackle such a widespread threat. ‘I, for one, do not want to see all the Bobbies carrying guns, I think that that would just increase violence on their streets.’

Kemp also shares one of the reasons for wanting to make this particular documentary. ‘My dad was a police officer, he’s retired now, but that still definitely played a part.’ In touching on the influence his family have had on his work, Kemp also describes what it was like growing up in the family home. ‘We would watch the news every night, turn the telly off, and discuss. I was raised to care about current world events.’

Having looked back at his own childhood, Kemp considers who he aims to reach with his work. ‘I want to target an audience that isn’t bothered by what’s happening in the world, and make them bothered.’

He believes that this particularly applies to the youths of today, those not responsible for the dire situations most nations are now finding themselves in. ‘You look at the state of politics in the U.K. at the moment and it’s an absolute mess, and Australia’s not doing too well itself. I think it’s time our younger generations, the millennials, start standing up and saying enough is enough. My generation has made a hash of it.’

Kemp lastly addresses the memories that have stayed with him throughout the years. He has found that those that haunt him the most are not of the occasions he has conversed with armed and drug-affected gang members, or dodged ISIS sniper fire in Syria, but in seeing the lasting consequences of senseless violence inflicted upon untold innocent victims. ‘Going home and talking to the mothers of the boys who never came back – they want answers that I can’t give to them. Those memories of the children and the women being brutalised. They are the moments that hurt you. I’ll never forget those things.’

Never one to shy away from new challenges, Kemp tried his hand at appearing on stage and regaling audiences with some of his greatest and most haunting memories late last year, with the Ross Kemp Extreme Tales On Stage touring throughout Australia. The endeavour proved successful, with most of the shows selling out and the resoundingly positive sentiments of the fans were echoed by critics. Since then, Kemp continues his documentary work, with no doubt more confronting and incisive projects to emerge from him and his team in the future.