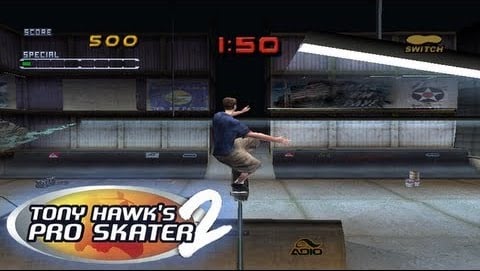 UPDATE (13/05/20): Tony Hawk’s Pro Skater 1 & 2 remastered has been officially confirmed, with a scheduled release date of September 4th. Check out the incredible launch trailer below – there really is a world of difference in graphics.

Hot damn, do we have some good news for you.

Just recently, there was a rumour circulating the cyberspace alleging the first two instalments of the Tony Hawk’s Pro Skater series were being remade. The source? Some trusted industry insiders.

Now, it seems as though its development has been confirmed: Activision is remaking Tony Hawk’s Pro Skater 1 & 2. And we cannot fucking wait.

This confirmation comes as an interview from October with professional skateboarder Lizzie Armanto resurfaces. Armanto was prompted about her appearance in Tony Hawk’s Pro Skater 5, before casually slipping in “he’s coming out with another one, and I’ll be in that too…” around the 02:50:00 mark. “He”, in this case, referring to the man himself – T. Hawk.

To make things even more intriguing, this particular recording hosted on Soundcloud is the only version that includes the confirmation comment. Every other version of the recording appears to have edited the comment out – almost as if we weren’t meant to know about it just yet. Real interesting stuff…

Tony Hawk’s Pro Skater first debuted on the original PlayStation in 1999. The in-game mechanics, trick system, and killer soundtrack quickly propelled it into gaming stardom. So much so that when the fourth game was released, Hawk was called into the Activision offices and slid a US$4 million cheque simply for being associated with it. You can hear the full story around the 1:23 mark in the video below.

In the meantime, all we can do is wait. And see. And bump the everliving fuck out of the legendary soundtrack (linked above for your enjoyment).