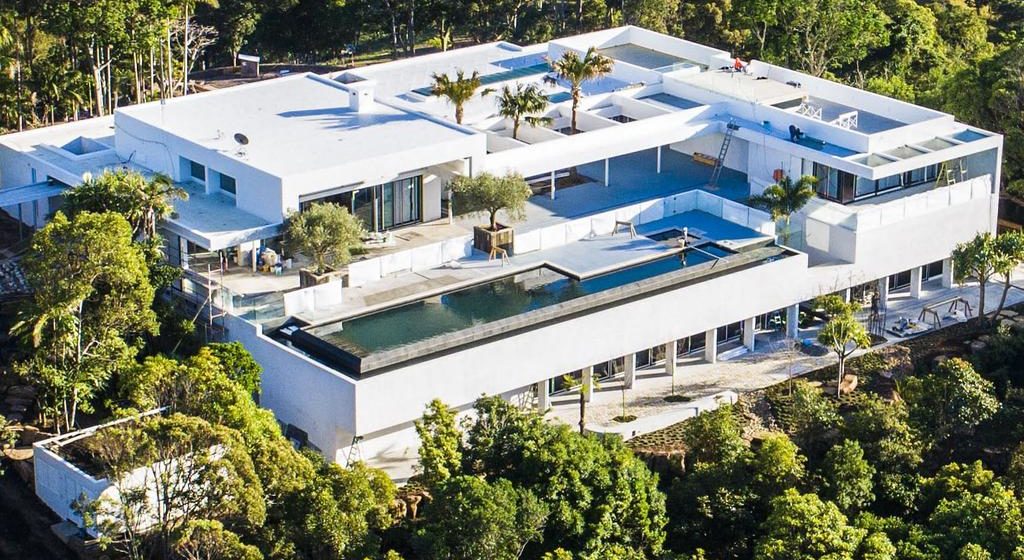 Extensive construction on Chris Hemsworth’s house – the not-so-humble abode in Byron Bay – has been underway since 2016. The fitness god/actor and wife, Elsa Pataky, recently revealed more details regarding their brand new mega-mansion.

Sitting on a 4.2-hectares of land and coming in at a price tag of $20 million, Hemsworth clearly hasn’t spared any expense. Tearing down the property which previously occupied the territory in 2017, the building has been completely reworked from the ground up.

The family appointed MCK Architects in Sydney to head up the massive project, with the firm stating…

“Our distinctive aesthetic is known for its classic proportion and geometric form. We enjoy using unexpected materials that challenge and sometimes even surprise. We also believe that good architecture and respect for the environment go hand in hand.”

MCK have been behind other well-known properties like the Sunrise House, which won the NSW Architecture awards in 2019, and their signature design can be seen throughout Hemsworth and Pataky’s Byron Bay pad.

One of the most recent additions to the household, the lawn placed near the front of the main building is a homely addition to the immense sprawl of concrete. With a built-in firepit and enough space for a hearty few rounds of backyard cricket, it’s a clean and simple finish to the already near-immaculate landscaping.

The Centr king needs to have the best wellness facilities around. Chris Hemworth’s house features an extensive array of relaxing amenities for those looking to get away from the pressures of Hollywood. With steam, sauna, and massage rooms alongside a fully decked out gym, there’s no reason to leave – apart from catching a quick surf.

The crown jewel of Chris Hemsworth’s house is the 50-metre infinity pool – the centrepiece of the outdoor area. Until recently, the bleak concrete hole remained empty. But seeing it filled now, it really ties everything together. With a direct view of the ocean right from the water’s edge and tropical courtyard area featuring palm trees sitting just behind it, it’s the ideal spot for unwinding.

Two bars are located across the property, ensuring the family’s circle of friends are well entertained at any given Hemsworth-Pataky event. Hemsworth himself is known to avoid alcohol and drugs, fair play when you consider the state of his rig. The man does, however, know how to entertain (as seen in the paparazzi shot below).

Paired with a media and games room on the property, it’d be the ultimate spot to throw an epic bender.

Elements of Byron Review: The Mecca Of Relaxed Australian Luxury