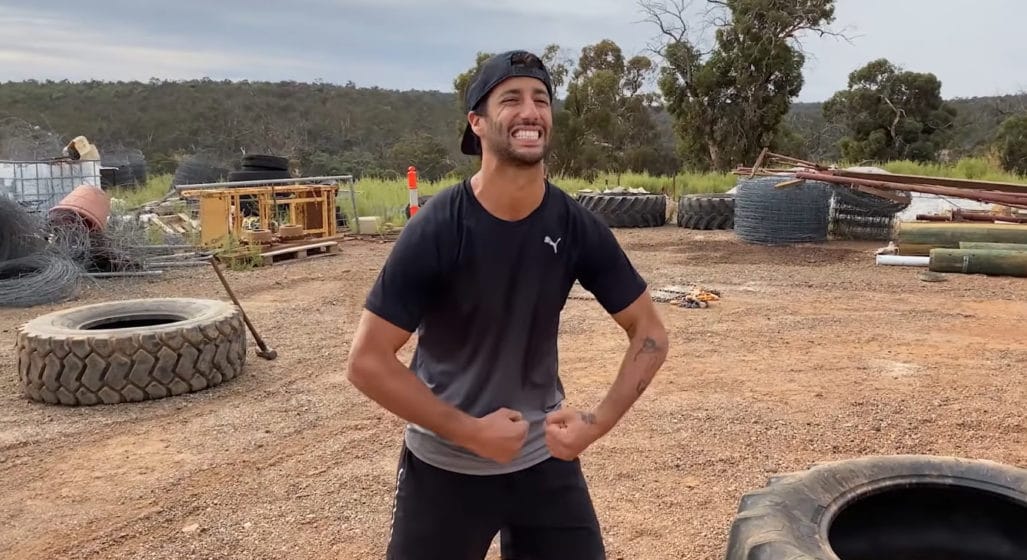 We all have to make do from time to time, especially in recent months given the state of the world. Not even McLaren’s Daniel Ricciardo was immune, having resorted to ripping some curls using whatever he found lying around, and smacking a tyre up in his backyard just to get a decent workout.

It’s certainly a far cry from how you’d imagine an F1 star trains – but as turns out, Ricciardo’s farm regimen actually does the job. Perhaps due to the whole cosmic energy of “getting back to basics” à la Rocky 4. Perhaps due to the fact he’d enlisted the help of performance coach/friend, Michael Italiano.

True to his fair dinkum spirit, at a glance, the Daniel Ricciardo workout is pretty damn Australian. Right down to the concrete package walks. I kid you not, there are parts where you can almost hear this song crescendoing in the background.

In any case, here’s a breakdown of how Danny Ric got it done during lockdown (as explained by the man himself to Men’s Health).

Why does Daniel Ricciardo workout?

“With F1 racing, we go through so many loads and G-forces,” Ricciardo explains.

“And our whole body, even though we’re tied down in the car, strapped in… our whole body is constantly going through so much stress and force.”

“The races are 90 minutes to 2 hours long. That’s why we need to be very conditioned from head to toe.”

As important as strength and conditioning are to one’s overall physical fitness, you’d be mistaken in thinking that this is about achieving major gains. When it comes to F1 driving, bulk obviously isn’t an advantage. The heavier you are, the slower the car will be.

How does Daniel Ricciardo workout?

During the isolation period, it was reported that Ricciardo trained six (6) days a week with a whole lot of improvisation and adjustment. The former referring to how limited equipment was – i.e. grabbing whatever you can on the farm – while the latter as a form of consideration, in an effort to avoid amassing that unnecessary bulk muscle we were just talking about.

“We have to manipulate the exercises so we don’t gain too much muscle or weight. So it’s a very lightweight and lean sport.”

“It’s fun, [Italiano] keeps it fresh. We’re not going through monotony. We’re changing things up every day. You can definitely get creative – just keep an open mind.”

In terms of performing the exercises themselves, Ricciardo approaches his farmer’s circuit as such:

“DR is going to slam this big truck tyre with a sledgehammer. This is pretty much an upper body workout,” says Italiano.

“He’s working his core. He’s going to alternate hand positions and feet positions, and get into a good rhythm.”

“These drivers endure quite a lot of G-forces through turning and braking, so it’s really important that their core is very well conditioned and strong to be able to control the car. So this is a fantastic exercise to complement this.”

“We’re improvising a sled drag, so we’ve got a chain drag. He’s going to stand up nice and tall, keep his chest up, straight arms, and he’s going to drag these chains toe-to-heel, toe-to-heel. This is really good for his posterior chain, working those glutes, and also for his forearm strength.”