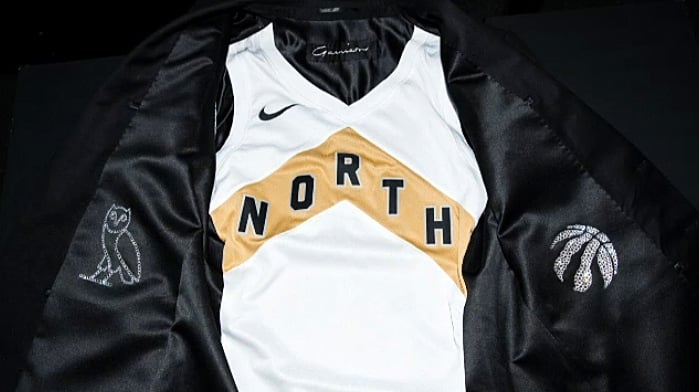 Few celebrity basketball supporters are as outspoken and animated on the sidelines as Drake. Throughout the final series, the 6 God has been a constant presence at Toronto Raptors home games, making himself known on the sidelines, and, if I’m honest, being an all-around pain in the ass. All of this support has been well received by the team, however, who’ve gifted Drake an AU$1 million custom jacket for his exuberant support.

The one of a kind jacket was given to Drake before the Raptors smashed the Milwaukee Bucks 120-102 in the fourth game of the Eastern Conference finals last week, levelling the series 2-2 (they’ve since gone on to win the series and will face the Golden State Warriors in the final).

Designed by Garrison Bespoke owner Michael Nguyen, the custom kit is made from a City Edition Raptors jersey that’s been turned into a winter jacket. The fabric used comes from a vintage jersey nearly 100 years old and imported from Europe. The jacket also contains 235 diamonds hand-sewn onto the fabric to create the famous owl logo of Drake’s OVO brand and the Raptor’s basketball emblem.

Nguyen spent a year-and-a-half creating the jacket and is extremely happy with the result, telling CTV News, “This one is over the top. It’s the best one I’ve ever done. Maybe the best I’ll ever make.”

Up Close: @drake’s OVO jacket presented to him by the @raptors tonight. pic.twitter.com/pPa1A7JVAy