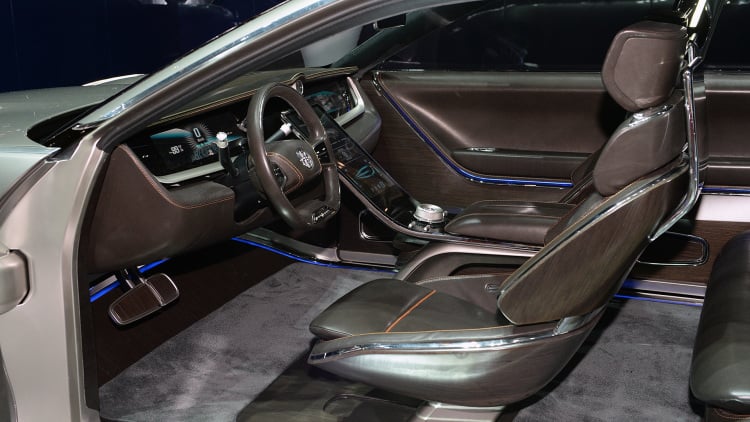 Boys and their toys has been a saying that has stood the test of time, but for the men of the future, the 87th Geneva Motor Show is here, where the automotive machines of the future are introduced to the world. The automotive industry is rapidly changing, with electric cars on the rise and the battle for the first fully functional autonomous car still up for the taking; competition has never been so tough. Major players in the space seem to be focusing on what the automotive world has been missing since forever, environmental sustainability as well as economic viability. From flying cars to salt water-powered cars, the 2017 Geneva Motor Show is displaying some serious concepts of the future. Here are some of our favourites.

First impressions are said to last, and you’ll find that rings true for the Pop.Up. The Airbus designed part car, part drone, has left us with a Tony Stark vibe that isn’t fading quickly. The electric, modular vehicle comprises a capsule that can disconnect from its ground chassis and be lifted into the air by a quad set of rotors, with a capsule made of carbon fibre, capable of holding two passengers.

Airbus representatives released details of the flying car saying, “the aircraft we’re building doesn’t need a runway, is self-piloted, and can automatically detect and avoid obstacles and other aircraft”. Airbus plan on having a prototype ready for testing by the end of 2021. The Pop.Up looks set to be the first real crack at a flying car.

The 87th Geneva Motor Show has a returned guest, the Quant 48 Volt, which is brought to you by nanoFlowcell Holdings. It’s the first electric sports car that can power from 0 -100 in 2.4 seconds and runs on saltwater, battery technology. Yes you have read correct a saltwater process named nanoFlowcell powers the Quant 48 Volt.

The company has explained the efficiency of its system on the environment “Using nanoFlowcell technology could avoid the emission of 19,250 megatons of CO2 every year from the combustion of fossil fuels in road traffic alone. That’s 75 percent of the CO2 emissions generated worldwide by transport and traffic.”

The fantasy of driving a saltwater powered car isn’t as simple as that. The company behind the concept has described it at length, since I’m not brave enough to do it myself here it is, as explained by the company;

“Just like a regular flow cell, the positively and negatively charged electrolyte liquids are stored separately in two tanks and, just like a traditional flow cell or fuel cell, pumped through a converter (the actual cell of the nanoFlowcell system) in separate circuits. Here, the two electrolyte circuits are separated only by a permeable membrane. An exchange of ions takes place as soon as the positive and negative electrolyte solutions pass one another on either side of the converter membrane. This converts the chemical energy bound within bi-ION into electricity, which is then directly available to the electric consumers.”

There is a certain amount of controversy surrounding the claims by the company, which of course centres on the saltwater battery process, whether it can actually produce the amount of electricity and energy-density the company has claimed. Like most innovations there is always a sense of negativity, but it would seem the concept car has come along way since its 2014 debut at the Geneva Motor Show.

Singapore’s first Hypercar was also unveiled at the show; the electric Dendrobium has been hyped for several weeks leading up to the Geneva Motor Show, the cars design and name is inspired by an orchid by the same name, which is native to Singapore.

The company brought in Williams F1 to assist in building and designing the car’s aerodynamics as well as its lightweight construction. It would seem no expense was spared when putting together this Singaporean beast.

Whilst the unveil of the hyper car is aiming at investors helping this concept become a reality, one can only marvel at the design, with carbon fibre fit-outs as well as twin rear diffusers and an F1 exposed wishbone, Vanda Electrics have truly pushed boundaries in manufacturing an electric beast, a statement from Larissa Tan explains; “Dendrobium is the culmination of a dream. Our design team has had sketches of an electric hypercar on the drawing board since the mid-90s, but that vision was many years ahead of its time. As electric technology has advanced, we have been able to revisit this vision.”

It was only a matter of time before Pininfarina created a luxury hybrid sedan. Meet the H600, a car packing some serious heat under its graceful curves. But that goes without saying given Enzo Ferrari made sure that from the 1950’s, every Ferrari road car was, and still is designed by Pininfarina.

The car inside is elegant, with rich leather everywhere, accompanied by dark wood veneers and a sunroof that is transparent by day and illuminates blue at night. It seems spacious and futuristic on the inside, but what is more intriguing is its ability to jump from 0-100 in only 2.9 seconds. Which places this car right up there with the Quant and the Dendrobium for supercar status.

If these concept cars are any reflection of what’s to come, we’re in for an exciting few years on the road. Eco friendly supercars with the ability to fly, as well as luxurious fitouts seem to be keeping the automotive industry on its toes. The 2017 Geneva Motor show brought the heat and truly played host to the toys of the future.