Behind The Scenes: Our Exclusive Chat With Daniel Ricciardo 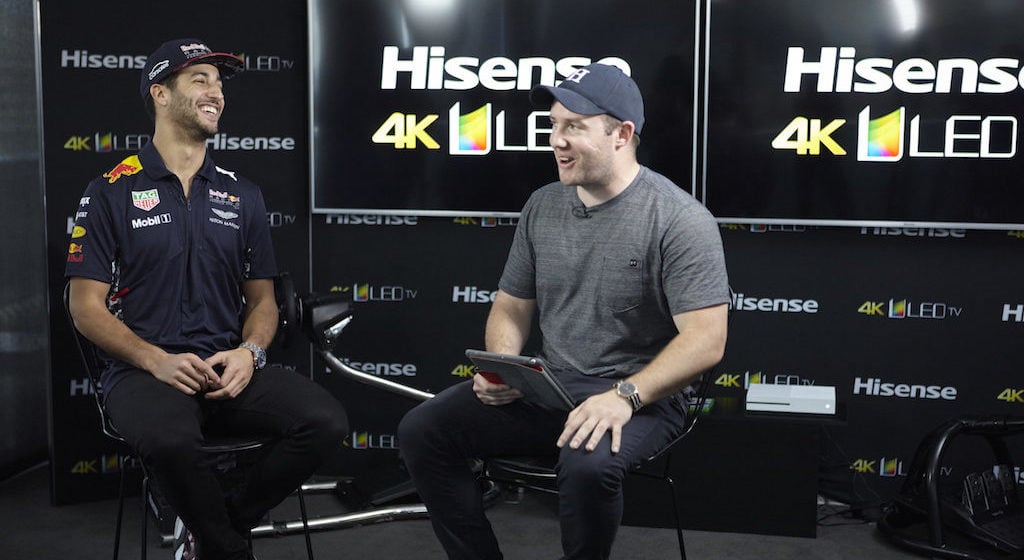 2017 is a huge year for Daniel Ricciardo. The young Aussie starts his fourth season with Red Bull Racing hungry for success, and with one of the sport’s most storied prodigies driving alongside him in the team’s other seat in Dutchman Max Verstappen.

We were lucky enough to sit down with Dan in his first interview of the F1 season in Melbourne this week, all thanks to Hisense—the official TV supplier of Red Bull Racing. The interview can be viewed in its entirety above, but here’s a run down of our afternoon with the ‘Honey Badger’ in the build up to this weekend’s Australian Grand Prix.

Despite the pressure of an impending F1 season beginning in just three days, the young Aussie strolls into the penthouse of the Blackman Hotel on Melbourne’s St Kilda Road with his trademark broad, toothy grin adorned across a refreshed and energetic face. He’s just finished 24 hours of travel from London and, much to our surprise, looks ready and willing to run a marathon. The West Australian quickly lets us know that he got some sleep on the second leg of his flight and that he’s just excited to be back on home soil, something he clearly cherishes in between managing what can be a brutal travel schedule on the F1 circuit.

What’s great about meeting Ricciardo is that you’re made immediately aware that he’s the same person off the camera as he is on it (plus a little more) – his ability to casually capture an audience and build instant rapport exudes charisma. Sitting down to interview the man, he quickly tells me off-camera that he always thought Boss Hunting was a game hunting magazine and that is “something we should explore”, much to my and everyone else in the room’s amusement. We’re about to broadcast live on

Red Bull Racing’s Daniel Ricciardo joins us LIVE from The Blackman with Boss Hunting to answer your questions ahead of Australian Grand Prix.

“>Hisense’s Facebook page via Facebook Live, and Dan is reminded of this fact by a Red Bull team member not for the sake of switching to sterile and media-trained responses—like many professional athletes today—but to ensure he doesn’t let his hair down too much. A breath of fresh air in the Australian sports landscape where we’re so often subject to your run-of-the-mill “yeah, nah, one game at a time” responses.

Ricciardo’s approach to race day is relaxed and logical and despite the seemingly obvious hometown pressures of beginning a season on home soil, he explains that it’s almost easier than having the midseason pressure of previous results. The gruelling amount of media commitments F1 drivers are put through must be extremely difficult to manage, and as we launch further into the interview it’s obvious that Dan has a habit of sitting back at first and letting the interviewer set the early pace before seeing where things will go and how much he’ll enjoy chatting.

His ability to channel Australian culture is world-renowned, with the ‘shoey’ craze started by his mates and fellow Aussies The Mad Hueys taken global by Dan’s post-race exploits on the podium several times last year, notably during his victory in Malaysia (he earlier explained off-camera that during the Japanese Grand Prix at Suzuka, he even had Japanese fans who clearly couldn’t speak a word of English chanting “Ricciardo.. Shoey!”).

Probing him on his plans post-race if he finishes on the step this weekend, it’s obvious he’s starting to enjoy himself in the chair chatting to me, cheekily telling me he’ll probably end up doing “something regrettable.” It’s answers like this and an approach to life off the track that has made Dan a fan-favourite since his breakout year in 2014, when he took over the Red Bull seat of ever-serviceable and newly retired countryman Mark Webber, winning three races and easily accounting for his heavily-favoured then-teammate Sebastian Vettel. What Webber lacked in off-track personality, Dan makes up for and more, even outlining his passion for a cold frothie (like any good Aussie) post-race and a preference for beer over champagne on the podium, if that were ever possible.

We chat about the bromance at Red Bull between he and Max Verstappen and while their friendship is well-publicised, their hunger for success shines through as Dan tells me how competitive they still are with each other. Red Bull as a team usurped Ferrari’s mantle as the main challenger to Mercedes GP last season, with Ricciardo and Verstappen the only non-Mercedes GP drivers to claim victories in 2016, in Kuala Lumpur and Barcelona respectively. He’s forthright in his assertion that both Red Bull drivers “were the only two guys to pull off exciting passing moves all season,” with Max’s shared on-track approach of “wearing his heart on his sleeve” making their rivalry as competitive as it is healthy and respectful. Both drivers will look to make headway and build on an encouraging 2016, with both putting up strong numbers in preseason testing in Spain earlier this month.

A lifelong F1 fan, Dan candidly lists Ayrton Senna as an early icon growing up, but similarities off the track with his all-time idol Valentino Rossi stuck with me. The seven-time Moto GP world champion Rossi is known for his ultra competitive nature on the track while being equally as humble and easy going off it. Vale’s penchant for smiling and seemingly never holding a grudge is strikingly similar to Dan’s, and it’s obvious how unassumingly self-confident both are without a level of pervading arrogance. This helps keep Ricciardo at ease, and as he details his hectic offseason training schedule, where he spent a large part of the northern Winter in southern California putting him in better shape than he feels he’s ever been, telling me he’s primed for what should be his most successful season yet.

As the interview tails off, I hang around for a drink and an off-camera chat, and watch on as Dan films a few short clips for Hisense to play during lead-ins at different Grand Prix around the world. Each clip features a sentence or two of local language for each respective race and, despite the long transit and several hours of media commitments immediately following, he doesn’t seem at all contrived or laboured, adding his distinct touch of charm to each lead-in. The universal love for the ‘Honey Badger’ is now as clear as ever.

The Australian Grand Prix kicks off at 4pm AEST this Sunday, March 26. We’d like to thank Hisense for the opportunity to chat to Dan in his first interview of the 2017 F1 season.