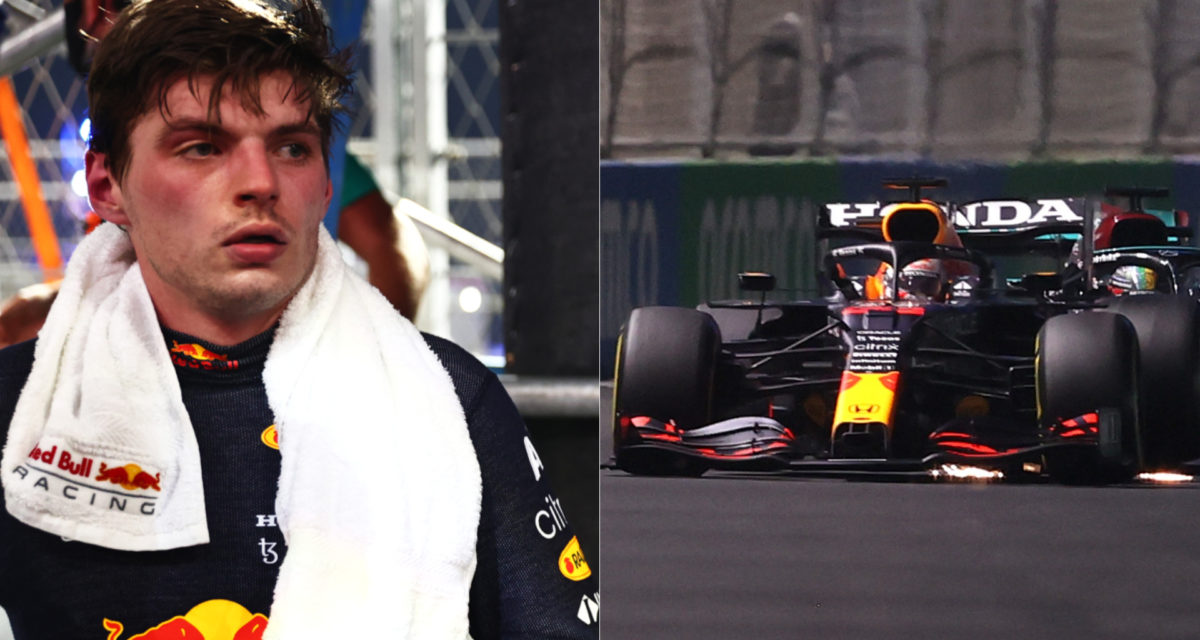 The world of Formula 1 is once again divided after the inaugural Saudi Arabian Grand Prix. As the title fight between reigning champion Sir Lewis Hamilton of Mercedes and Red Bull’s Max Verstappen comes down to the wire – the closest title fight in years – the proverbial elbows were out a Jeddah Corniche Circuit, which has now resulted in a further 10-second penalty for the latter.

The incident in question occurred during a very tense Lap 37, wherein both drivers were battling for the lead. Similar to his defence during last month’s Brazilian Grand Prix, Verstappen forced Hamilton wide before exceeding track limits to maintain said lead. When the Dutch motorsport talent was ordered to surrender his position, however, there was a grave moment of miscommunication.

Unaware the RB16B was about to decelerate so quickly, Hamilton swerved left to avoid a total collision, clipping the vehicle ahead, and damaging his front wing. Fun fact: a DNF for both parties would’ve actually benefitted Verstappen’s championship campaign greatly… not that we’re implying this was ever his intention. In any case, after reviewing the footage + facts, Max Verstappen would be handed the 10-second penalty, on top of another five-second penalty for an earlier transgression at Turn 1, plus another two penalty points – which brings his total penalty point count to seven over the last 12 months.

“At Turn 21 the driver of car 33 [Verstappen] was given the instruction to give back a position to car 44 [Hamilton] and was told by the team to do so strategically. Car 33 slowed significantly at Turn 26,” explains the Formula 1 stewards’ report.

“However, it was obvious that neither driver wanted to take the lead prior to DRS detection line 3. The driver of Car 33 stated that he was wondering why Car 44 had not overtaken and the driver of Car 44 stated that, not having been aware at that stage that Car 33 was giving the position back, was unaware of the reason Car 33 was slowing.”

“However, the sudden braking by the driver of Car 33 was determined by the Stewards to be erratic and hence the predominant cause of the collision and hence the standard penalty of 10 seconds for this type of incident, is imposed.”

RELATED: Mercedes F1’s Toto Wolff Has Already Predicted How The 2021 Season Will End

“I’m just trying to race and this sport these days is more about penalties than about racing,” says Max Verstappen himself in light of this latest 10-second penalty.

“For me, this is not Formula 1 but at least the fans enjoyed it. I gave it all today but clearly not quick enough. But still, happy with second.”

“Luckily the fans have a clear mind about racing because what happened today is unbelievable.”

As you can imagine, Lewis Hamilton is of a vastly different mindset.

“I’ve raced a lot of drivers in 28 years,” says Hamilton.

“I’ve come across a lot of different characters and there’s a few at the top which are kind of over the limit. The rules kind of don’t apply, they don’t think of the rules.”

“I’ve avoided collision on so many occasions with the guy and I don’t always mind being the one that does that – because you live to fight another day. Which I did.”

“I definitely feel that there were scenarios where that was the case. This isn’t the first time I have had to avoid collisions and that is how I felt in the moment.”

Thankfully, Max Verstappen gets to keep his P2 finish, which keeps the score perfectly even with Sir Lewis Hamilton as we approach the season’s final calendar event: the Abu Dhabi Grand Prix at Yas Marina Circuit. Given how the 2021 driver standings has it all tied up at 369.5 points apiece, we can soundly cross out certain possibilities – although the assertions of Mercedes Team Principal Toto Wolff may still hold some validity.

“It if was to come to the scenario of the last race in Abu Dhabi and they were to be racing each other for the title, whoever is in front [on points] is absolutely going to try to do the same as in the Senna-Prost years,” Toto Wolff previously noted during an interview with Martin Samuel.

If the season ends in a points tie – which, again, could be achieved by way of two phat DNFs – it’ll fall to whoever won the most races; which spells victory for Verstappen with nine race wins against Hamilton’s eight. In fact, the more you think about it, as unsportsmanlike as the prospect alone is, a crash might just be Mad Max’s surest route to victory.

“And I don’t think you can control it – Hamilton and Verstappen – I don’t think you want to control it because they are the gladiators in their machines. That is what makes this sport so interesting. Because it is ingrained in our nature that we don’t like confrontation and then one is intrigued to see how that relationship unfolds.”

“I look back at Silverstone. Our perspective is of an over-aggressive Verstappen, who has been over-aggressive for a long time but has always got away with it, who then ended up in the wall. We think he should have left space. We saw him crash, which was hard, but he got out of the car and we heard on many occasions he was OK, that he was sent to hospital for precautionary checks but was all right… and that came from senior Red Bull personnel.”

For the sake of Max Verstappen and his chances at securing that maiden Formula 1 championship title, let’s hope the stewards aren’t penalty happy come December 13th.