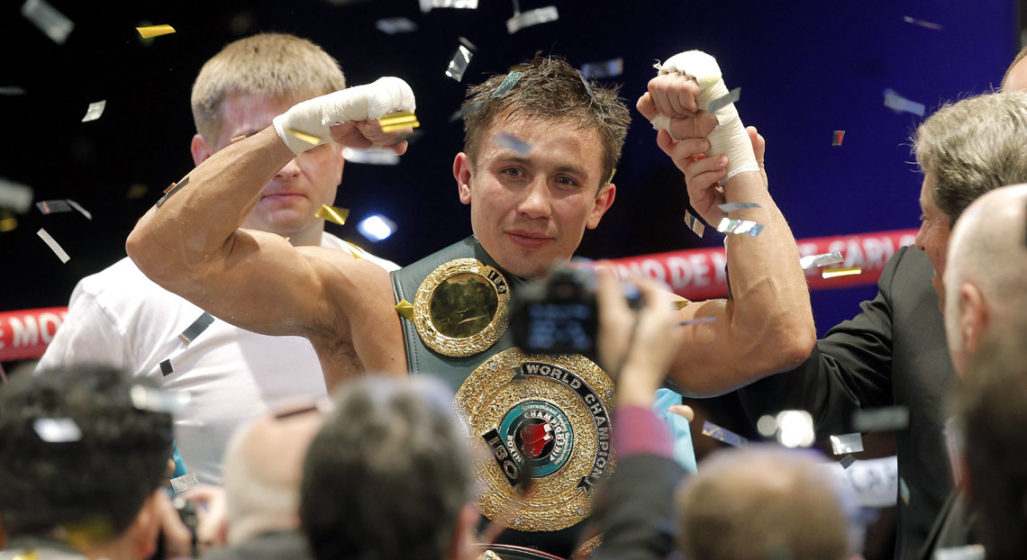 “There is a monster in the middleweight division” HBO boxing analysis and commentator Max Kellerman trumpeted after Golovkin’s HBO and American debut in 2012 against Polish boxer Grzegorz Proksa. That fight ended early and savagely (TKO5) like most of Triple G’s fights.

Gennady’s charisma inside the ring manifests itself in the form of brutal knockout power in both hands, technical mastery from his Olympic amateur background (Silver medalist 2004) and his inexorable rhythm. Outside the ring he is charming, soft spoken and humble which was formed from his modest beginnings in Karagandy, Kazakhstan. His father a coal miner, his mother an assistant in a chemical laboratory, his older brothers Sergy and Vadim who were in the Russian army and were both killed in action. Before their deaths they pushed a young Gennady into fighting, often they would walk up to a group of older men and ask Gennady “Are you afraid” to which he would reply “no” a streetfight shortly resulted. Gennady remarks of these early years that they extremely tough. “My brothers, they were doing that from when I was in kindergarten…Every day, different guys”.

The Kazakh boxing amateur program was run by borderline sadistic trainers such as Alexander Apachinsky who was the national boxing coach. His ‘Training’ techniques created a certain ‘breed’ of fighter like Vassily Jirov (1996 Gold medalist). This environment suited Golovkin and eventually when he turned professional boxing must have seemed like easy street compared to his earlier life.

After a stellar amateur boxing career (345-5) Gennady turned to professional boxing in 2006. Following a slow start in the first couple of years boxing in Germany, he then signed with K2 promotions founded by the Klitschko brothers’ and linked up with Californian trainer Abel Sanchez. Abel has worked to mould Golovkin from a disciplined Kazakh amateur, into the “Mexcian style” of calculated aggression seen today. It is rumoured that Abel (after a few weeks of training Golovkin) famously and somewhat boastfully wrote three names on a chalkboard in his gym; Ali, Mayweather, Golovkin. He said to Gennady “You could be right there”.

Gennady over the last few years has become one of the most avoided fighters in boxing along with Cuban Super Bantamweight world champion Guillermo Rigondeaux. Unlike Rigondeaux, Golovkin has not been avoided for being labeled a ‘boring’, technically sublime fighter but because of his immense power and stalking ability that only Mike Tyson rivals. What also adds to his charm is his broken english that has led him to become a cult favourite among boxing fans. With such quotes as “I respect box, I respect everybody, I respect everybody athletes” and “Thank you for Gabriel” first he is strong man, “Good boy” and my personal favourite “Hey man go into home, tell your parents just hi I come back”.

This Sunday (1pm AEST) Golovkin faces slick Cuban-American southpaw Willie Monroe Jr (19-1,6 KO) from New York and winner of the ESPN middleweight ‘Boxcino’ tournament last year. He is also the nephew to Willie Monroe who beat (UD10) Marvin Hagler in 1976. Monroe is a solid challenger for Golovkin and hopes to, as most of Gennady’s opponents hope to do ‘Shock the world’. Monroe is a fighter with legitimate talent and a solid amateur background with good movement and can throw fast combinations. However in HBO commentator Jim Lampley’s admiring words “Its just a matter of time, Its always just a matter of time” before Golovkin’s punches connect and then proceeds to unleash a storm of ‘Kazakh Thunder’ upon his courageous opponent.

Maybe Gennady is overhyped. Maybe he has been fighting overmatched opponents, and maybe the myth that came out of Eastern Europe five years ago has materialised into something less fearsome than the rumours first suggested. However, maybe we are watching the seemingly inevitable transference of power in the boxing landscape from the United States to the former USSR provinces. But just maybe we are watching a one of the greatest Middleweights since the ‘Marvellous’ Marvin Hagler and possibly the greatest middleweight of all time. Either way I look forward to watching his rise and so should you.

We leave you with a quote from former Super Middleweight Champion and a future Hall of Fame fighter from Britain Carl Froch: “Just swerve Golovkin like the plague, he punches like a mule, don’t need to be in there with him”.