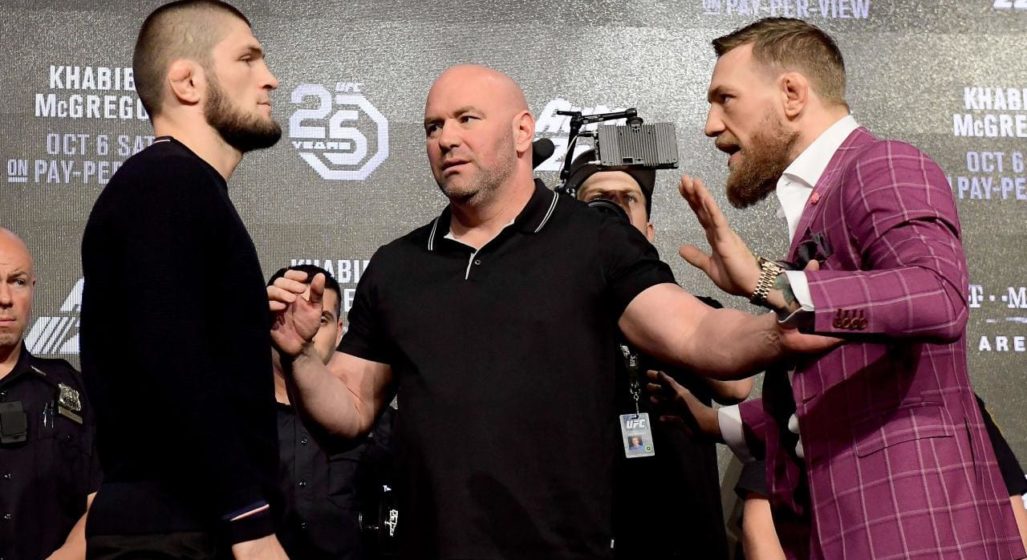 On October 6th, Conor McGregor will step back into the Octagon for the first time since his bout with Eddie Alvarez in 2016. After a brief yet unprecedented stint in professional boxing against Floyd Mayweather, Jr., McGregor is now set to face off against Khabib Nurmagomedov. And I don’t say this lightly, but the Fightin’ Irishman truly has his work cut out for him.

By in large, the two fighters are quite physically even with the exception of McGregor’s reach advantage. This may prove dangerous within the first three rounds, but more on that later.

Note Nurmagomedov’s incredbile 26-0 record. Granted, he’s only been in the UFC for the past six or so years, but given how that’s twenty-six straight wins across a profession career going back a decade, one has to think– this man is a whole different species of fighter.

How McGregor Will Win

Beyond publicity and dress sense, McGregor is the master of finding the precise angle to take someone apart, as well as having deadly counter strikes at the ready. As anyone and their dog could tell you, his major strength is in his boxing (but strictly within the realms of MMA). Point of fact, eighteen of his twenty-four professional fights has ended in KO or TKO. These victories have also rarely occurred past the second round (keep this in mind for later).

McGregor will pose quite a threat to Nurmagomedov in the first round and a half. Expect an early and unrelenting push as explosive as anything. From the end of round two onwards, his edge over Nurmagomedov will become increasingly less apparent. As demonstrated in both fights with Nate Diaz, despite how fit and well conditioned he is, McGregor has known stamina issues. And yes, I know he “won” the second time round by “majority decision”, but lets not kid ourselves. He was basically waiting on the clock and hoping for the best during rounds four and five, else he’d have actually finished it.

Additionally, it’s in his best interest to stay away from the ground. All three of McGregor’s professional losses have been by submission. Though this may prove difficult given who he’s up against.

In short, McGregor has to close it off quick before the window of opportunity for that signature left-handed power counter becomes smaller and smaller. And the hunter becomes the hunted.

How Nurmagomedov Will Win

I don’t think the UFC has ever match two fighters so diametrically opposed before. On one hand, you have McGregor who strikes like you would not believe, generally finishing quick and explosive. And on the other, you have Nurmagomedov who is a world class grappler that thrives on the ground, stands to be a more even fighter (READ: consistent, however unpretty it may appear), and lives to go the distance. This is a man that relishes the long game.

Nurmagomedov is all about the grit and the guts. He’s shown us that he definitely has a chin on him, though it’s still in his best interest not to eat too many left-handers from McGregor. For those who are skeptical, watch the fight linked above to see how Nurmagomedov deals with being outclassed in stand-up game. As long as he keeps his ego at the door and doesn’t try to demonstrate he can go slog for slog (à la Ronda Rousey vs. Holly Holm), rides out the storm in rounds one and two, and doesn’t go for half-baked gamble sprawls under pressure, the win is as good as his.

Now, when I say Nurmagomodev is a world class grappler, I don’t think I can adequately express how world class he is. Getting horizontal with someone this technically brilliant is essentially a death sentence, and dare I say it, has far more utility than being a knock-out artist. The man is incredibly dominant which gives him a major edge over McGregor, who has historically lacked adequate ground defense. This man is a certified threat.

The BH bet is on Khabib Nurmagomedov. He has the staying power, patience, fight IQ, and potentially even the chin to take down McGregor. To McGregor’s credit, Nurmagomedov will be in the greatest danger of being knocked out in the first two rounds. But after that period has been sustained (which we believe it will), McGregor will hit a wall very quickly, slip up, and be submitted. Perhaps even as early as the late stage of round three.

But hey. We could be entirely wrong. Get back to us come October 7th.