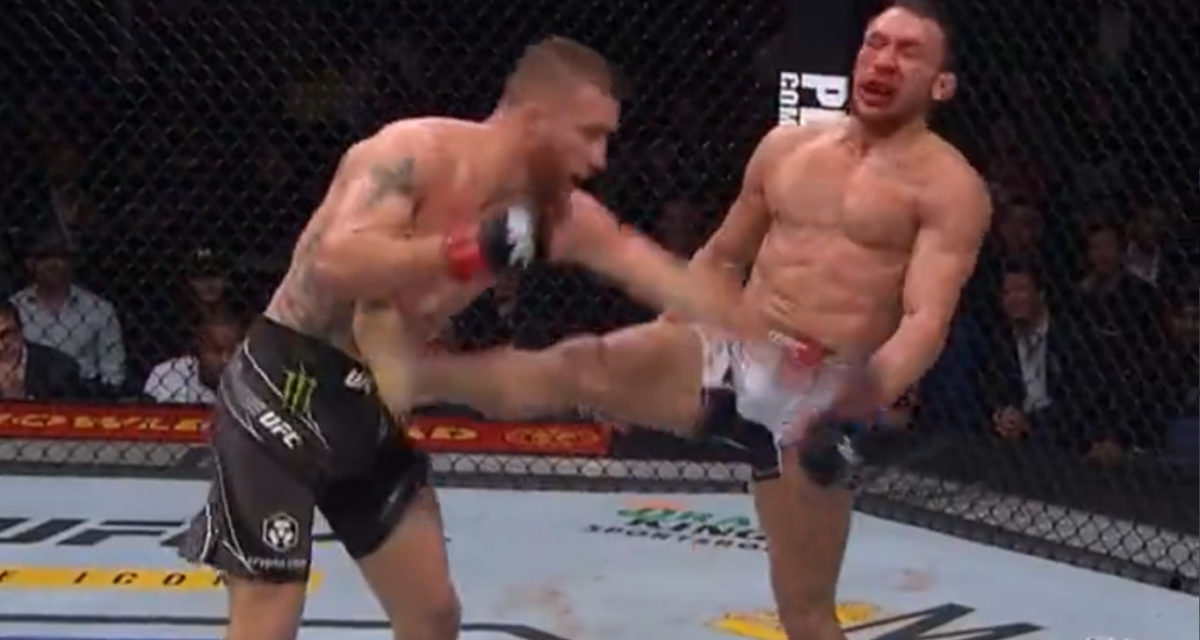 UFC 268 delivered the slug fest that was promised with nary a moment to catch your breath. Two title fights, the foundation for yet another title challenge, a whole lot of grit… and at the centrepiece were a trio of names guided by training extraordinaire Trevor Wittman: Justin Gaethje, Rose Namajunas, and Kamaru Usman.

If the six consecutive knockout finishes witnessed in the UFC 268 prelims didn’t set the tone, the bout between Justin Gaethje and Bellator transplant Michael Chandler certainly did. Both lightweight fighters swung for the fences, determined to not-so-kindly gift each other an early case of CTE for Christmas, neatly wrapped up in four-ounce gloves. Gaethje would eventually walk away with the decision victory – as well as a ticket to another title shot against whoever prevails at UFC 269: Dustin Poirier vs Charlies Oliveira come December.

While it’s safe to say the majority of fans rocked up for Wittman’s Trio, neither Shane Burgos vs Billy Quarantillo nor Marlon Vera vs Frankie Edgar disappointed by any means. Despite having his legs obliterated by Burgos midway through the hostilities, Quarantillo resigned to being carried out of the Octagon on his shield, making his opponent work for his W until the very end. Edgar’s former greatness was glimpsed here and there, at one stage setting the pace with intelligent striking and logging a decent amount of control time. Sadly, Vera proved too much for The Answer, sealing the deal by way of show-stopping front kick with just a minute left on the clock.

In stark contrast to how their first meeting concluded – in a very swift 78 seconds courtesy of a head kick for those of you who need reminding – Rose Namajunas required all five rounds to defend her women’s strawweight title against Zhang Weili, i.e. put on the show many had expected back in UFC 261. The challenger from Beijing stepped forth with the vigour of someone hunting for an explosive finish a la Fight Night: Jessica Andrade, and effectively reclaim what was hers up until April.

Weili managed to make an impact with her stand-up, though the moment it was clear her arsenal was noticeably lacking on the ground – more specifically in scenarios when she was flat on her back with someone in her closed guard – she found herself overwhelmed by Namajunas, wrestled to the canvas on multiple occasions. This bout ended with a split decision victory in favour of Thug Rose which will probably be debated by the fandom in the same way Alexander Volkanovski vs Max Holloway II has been discussed thus far.

Finally, there was the grudge match we’d all been waiting for. The Nigerian Nightmare, current #1 pound-for-pound UFC talent, an MMA GOAT in the making, and of course, reigning welterweight champion: Kamaru Usman; against the controversial and much-maligned top division contender, Colby “Chaos” Covington. It seemed as if the rematch was done and dusted towards the end of Round 2 wherein Usman knocked Covington down twice, capping it off by sitting in mount until the stools came out pre-Round 3.

But there’s a reason why Covington once retained the welterweight belt, and it was showcased in full view for the remaining three rounds, heavy swings and all. Later on, Covington even came inches away from forcing Usman to concede a takedown for the very first time in his entire professional career. With the exception of a few uppercuts which landed flush, however, at no point did it feel like Usman was in serious danger. Accordingly, he cinched the unanimous decision victory and protected his throne. The UFC 268 co-main event was punctuated by a wholesome moment that saw Colby Covington drop his public persona long enough to exchange an acknowledgement of respect.

What a year for combat sports.