Marseille Calanques: The Stunning Other Side Of The French Riviera 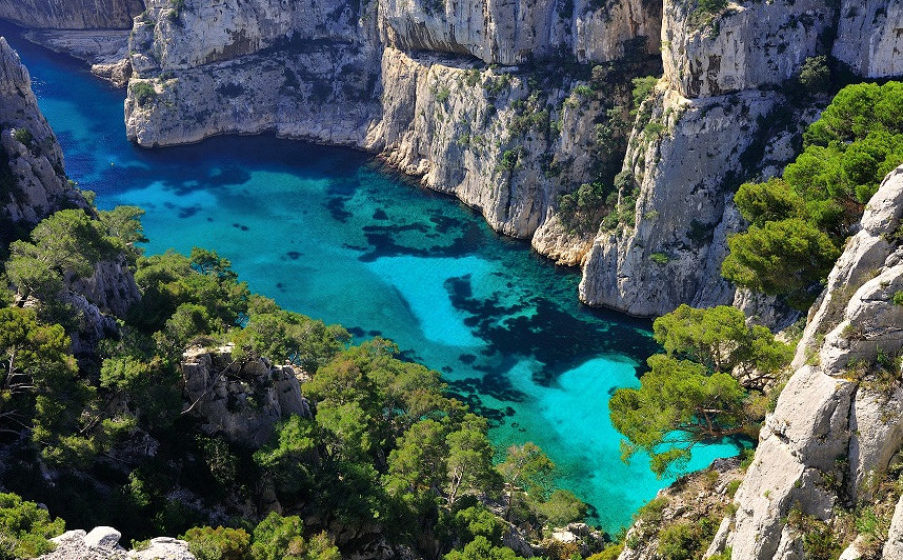 On a recent trip to the South of France, I decided to visit somewhere that does not receive much coverage. Whilst Cannes and St Tropez always steal the spotlight, I was craving some natural scenery as change. On a crisp Sunday morning (still around 23 degrees at 6am) I walked down to train station in Nice, where I was staying. I quickly booked a local train and hopped on for the 2 hour journey to Marseille.

My goal for the day was to get to a place called “Calanque Du Sugiton”. Now for those that don’t know a calanque, according to Wikipedia, is a “narrow, steep-walled inlet that is developed in limestone, dolomite, or other carbonate strata and found along the Mediterranean coast”. Although Wikipedia can sometimes be hit or miss with their information, in this case their statement is bang on point. The calanques are basically inlets with really steep rock faces on either side. The coastline surrounding Marseille has a whole collection of them, and Sugiton was meant to be the easiest to access by foot. It was also rumoured to have a spectacular “beach” (by the European pebble definition) at the bottom and some amazing lookouts on the hike down.

Arriving at Marseille around 9am, I headed to the Metro. From there I caught a fairly slow train to a bus station called Castellane, where I hopped on a bus to an area called Luminy. Although this was a great option money wise, with less than 5 euros being spent on the round trip, there was about 20 other stops along the way. This made travelling across a relatively short distance take about 40 minutes – if time is of the essence, look at getting a cab.

Finally I reached the entrance to the national park which contained the calanques, which was an hours walk away from Sugiton. It honestly felt like I was back in Australia, the usual national park tourist sign paired with the dirt track and gums was definitely familiar. That was until I was greeted with hordes of French teens chain smoking to their heart’s content. Although this may sound unpleasant, it actually reassured me. For the whole hike down the only language I heard was French. I was heading somewhere truly for the locals, a nice change from the bustle of the rest of the Riviera.

The start of the trek was a nice stroll. I managed to break away from the crowds and find my own vantage point along another minor trail. There was literally a dozen paths you could take off the main path, and they looked liked they led to some spectacular walks. I would’ve attempted them but when I saw a hiker pass with boots and a hiking pole I knew there was no chance.

Continuing onward, I reached a more formal lookout, the edges of the cliff fenced off. You see, the way the hike to Sugiton works is that you’re basically trying to traverse down the steep cliffs to the bottom of the calanque. The start of the hike consists of this lovely relaxed walk, then it reaches this fenced off lookout. On either side are steep cliffs, with Sugiton on the left and another calanque on the right. It was basically sitting on a knife’s edge. But boy, what a view it did reveal.

Heading further down, I encountered a number of switchbacks. These we’re nicely paved and offered stairs if you wanted to skip the length of the switchback. But as I got further towards the actual Sugiton inlet, it basically turned into a cliff face. I’m not kidding, you literally have to jump from rock to rock to get down.

Now when you reach the bottom of this great trek you encounter your first sight of the inlet. Now however enticing that may be, DO NOT stop there. The rocks are packed with people and there’s no place to sit. Instead head over to the right where there’s an actual lovely beach. It took me an hour to discover this fact, and after that trek you do not want to waste time.

The inlet itself is spectacular, with the water the bluest you’ve ever seen, if a little cold. Plenty of places to perch and jump off. More than enough room to find yourself a spot to sunbathe. Definitely bring goggles; underwater the edges of the cliffs look spectacular. Sitting there and finally putting my stuff down around 12pm, life was good – I’d arrived at the calanques, and they were one of the most spectacular sights I’d ever seen.

But I had made a massive mistake. I had only managed to pack one measly bottle of water. Although lovely, there is no running water down at the calanque nor proper shade. I was screwed.

I only managed to last 2 hours down there before the thirst got the better of me. A shame really after all that. I was yet to know the worst part was yet to come. The trek back up. I literally came out of that hike up drenched in sweat. No joke, pools of it were forming at my feet. My legs were on the verge of collapse. A walk that had seemed so pleasant going down was absolute hell to get back up on. I dragged myself back onto the bus, then the Metro, then Maccas for some semblance of sustenance, and then the train home.

So what’s the final verdict? Yes, it’s definitely worth it, especially if you like hiking. It’s rewarding when you finally make it down to the water. It feels like you’ve achieved something after the typical Euro trip pig out – just make sure you pack enough water.

Or you can always take the easy way out and rent a boat that takes you straight into the heart of the calanques. But that would be cheating.