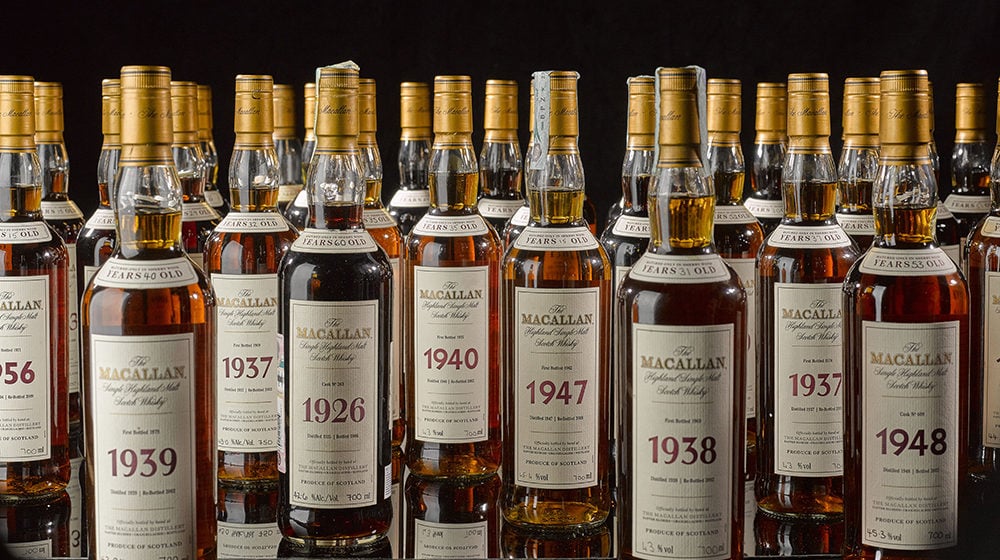 Sotheby’s has announced it will be auctioning off ‘The Ultimate Whisky Collection’ in London later this month, with the rare collection worth approximately AU$7.1 million.

The owner of this incredible selection of spirits remains a mystery, but it has been revealed they are selling a total of 394 lots, comprising of 467 bottles and nine casks.

The collection has 178 bottles of The Macallan Fine And Rare series worth an estimated $3.9 million alone and includes an ultra-rare bottle of The Macallan 1926, one of only 14 remaining bottles from the famous cask number 263. This tasty tipple is expected to fetch close to $800,000 by itself.

There are also two Lalique Six Pillars Collections (each a series of six bottles with an estimated value of $800,000), as well as a wall-mounted cabinet created by craftsman James Laycock that houses an assortment of 46 Macallan Fine and Rare miniature varieties from 1937 to 1991 (with a value of $156,000).

Other rare whiskies up for auction include two 70-year-old offerings from Gordon & Macphail, the oldest official bottlings from Glenfiddich (a 64-year-old from 1937) and Balvenie (a 50-year-old, also from 1937), the Bowmore 54-year-old ‘Crashing Waves’ from 1957 and a number of releases from Italian bottler Silvano Samaroli, who is revered by collectors for his whisky distilling skills.

Bidding kicks off online from September 27th and will end with a live auction on October 24th at the Olympia event space in West Kensington, London. For a full list of every whisky up for grabs, visit sothebys.com.

RELATED: The jury’s in: these are the world’s best whiskies for 2019