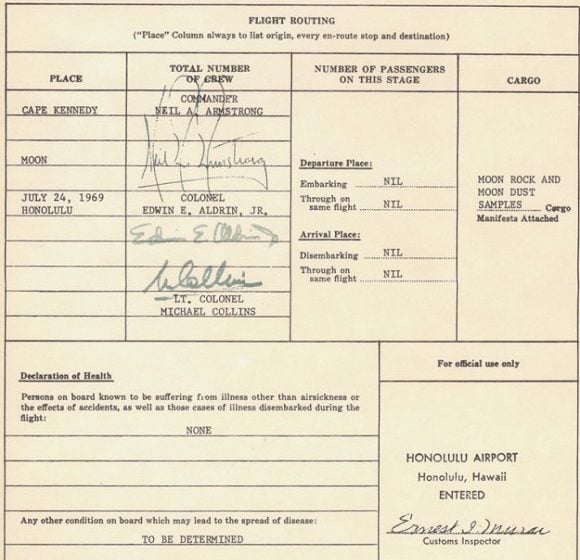 It’s hard to believe that it’s been 50 years since mankind first walked on the Moon, especially considering the astronauts in charge of Apollo 11 had the same technology at their disposal equivalent to a modern-day washing machine.

It was, quite simply, a massive stretch of humanity’s capabilities at the time and one that shouldn’t have been possible. In light of that, and to recognise the landing of the Apollo 11 crew on the lunar surface almost to the day, we’ve compiled 10 awesome facts about the Moon landing you didn’t know about.

Armstrong carried with him a piece of wood from an aeroplane that belonged to the Wright brothers.

Just 66 years separated the first manned lunar mission and the first ever recorded flight by the Wright brothers in 1903.

In Neil Armstrong’s “personal preference kit” (PPK), he packed pieces of wood from the pioneering Wright plane as well as fabric from the aircraft to acknowledge the dramatic progress of aviation. These artefacts now sit in the Smithsonian Air & Space Museum in Washington, D.C.

If Apollo 11 had failed, President Nixon had a speech ready.

“Because of what you have done, the heavens have become a part of man’s world.”

These were the words of American President Richard Nixon that rung out across the globe in his telephone call to the astronauts on the lunar surface. However, the mission had such a high risk of failing, Nixon’s speechwriter had drafted an address to the world in the case of a catastrophe. As nobody had ever gone where the crew of Apollo 11 went, even the most senior officials and scientists at NASA didn’t know if it was possible to take off from the lunar surface.

As reported by James Mann, writing in The Washington Post, William Safire, then a White House speechwriter, drafted a speech for Nixon to deliver to the nation if the astronauts were stranded on the moon.

Safire’s undelivered speech lay hidden for 30 years until Mann found it in the late ’90s while browsing Nixon archives when researching for a book.

The three astronauts couldn’t afford life insurance, so they hatched a plan themselves.

While history remembers the Apollo 11 mission as a success, the journey had an equal chance – if not more – of being a failure. When all three astronauts were in pre-launch quarantine, they signed hundreds of autographs and sent them to a friend. If anything was to happen to the astronauts, they entrusted their nominated friend to send the memorabilia to each of their families. They’d hoped the families could make some money by selling the signatures of the Apollo 11 crew, as none of the astronauts could afford life insurance.

The Lunar Module landed with only 25 seconds of fuel to spare.

The original lunar landing site was thought to be a clear choice until Armstrong and Aldrin peered out their window in the final minutes to see it littered with perilous boulders. Armstrong had to take manual control of the Lunar Module (LM) and fly it beyond the planned landing site, thus stretching the ship’s fuel limits to the max. A pre-determined limit had been set by mission control, and, if the LM had not landed within that limit, the landing would have automatically been aborted. The astronauts landed within 25 seconds of the point of no return.

Armstrong and Aldrin spent almost a full day on the Moon’s surface.

The two astronauts spent a few hours walking around on the lunar surface itself, a practice which is known as EVA – “extravehicular activity.” What many do not realise is that their total time spent on the surface of the Moon, including time outside the module, was a massive 21 hours and 36 minutes.

The Astronauts couldn’t close the door of the Lunar Module behind them.

When Neil Armstrong and Buzz Aldrin were leaving the safety of the LM to explore the Moon for the first time, they both had to remember not to fully close the door on the Lunar Module behind them. The door was left ajar to prevent heat escaping from the cabin – but not closed completely – in case the cabin somehow repressurised, which could make it very difficult to get the door open. Aldrin and Armstrong joked about leaving the door open:

There was indeed a handle on the outside of the LM, despite some commentary after the fact suggesting it was omitted from the design to save weight.

The departure from the Moon’s surface was ignited by a pen.

Upon commencing preparations to return to the Command Module, the duo realised that a switch on a crucial circuit breaker needed to start the launch process had broken. This particular switch left them without a way to ignite the launch, so while mission control worked on a plan to repair it, the astronauts tried to sleep. Eventually, a presumably frustrated Aldrin decided something had to be done, and jammed his pen into the mechanism creating a make-shift switch, sending the astronauts home. Hollywood stuff.

The astronauts left pictures of human beings and the recordings of many languages on the Moon’s surface.

Despite many hailing the Moon landings as an American Cold War milestone, retrospectively, they were perhaps some of the most significant moments in modern history. Acknowledging this, pictures of human beings, as well as audio recordings of several different languages, were left on the lunar surface by the Apollo 11 crew.

To commemorate the sacrifices made in the lead up to achieving the mission, medallions bearing names of the three astronauts who perished on the launch pad in Apollo 1 and the two cosmonauts who died in a similar accident were all left on the surface of the Moon also.

The astronauts had to go through customs upon their return.

“Departure from: Moon”. Imagine having to write that one down on an arrivals form.

Not only was this form required to be completed by each astronaut upon their arrival into Honolulu, Hawaii, on July 24, they also had to declare their Moon rock and Moon dust samples they’d brought back with them.

After returning to Earth, the astronauts were placed into a 21-day quarantine.

We now know that the Moon is void of any forms of life, but all three astronauts had to be taken into a quarantine facility as a precaution for 21-days upon their return to Earth until these suspicions at the time were quashed. This was to prevent contamination of any micro-organisms carried by the crew from the Moon. Nobody in the space program was sure whether or not the lunar surface was sterile.

RELATED: 5 Awesome Facts About The Concorde You Didn’t Know About