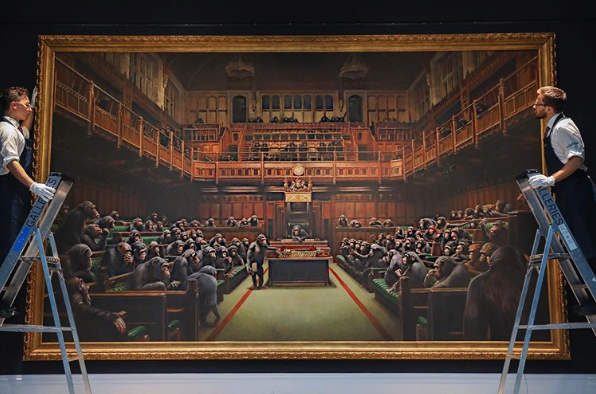 The work depicts the British Parliament being run by chimpanzees, Banksy’s not so subtle jab at the intelligence of those in the House of Commons. First displayed at an exhibition in Banksy’s hometown of Bristol over a decade ago, the talented artist reworked the piece before selling it to an unnamed buyer in 2011.

Swing by Sotheby’s London galleries this weekend to see Banksy’s monumental dystopian view of the House of Commons 🐒 Our Contemporary Art Exhibition is free and open to all from 12-5pm on Saturday and Sunday, featuring further works from Jean-Michel Basquiat, Andy Warhol, David Hockney, Francis Bacon and many more. #sothebyscontemporary #banksy #contemporaryart

The largest known oil painting by Banksy – measuring 4.2 metres by 2.5 metres unframed – was expected to fetch somewhere had been estimated to sell for between £1.5 million and £2 million, but eclipsed this estimate after a ferocious 13 minute battle between 10 different bidders.

Taking to Instagram, Banksy wrote of the sale, “Record price for a Banksy painting set at auction tonight. Shame I didn’t still own it.”

The sale of Devolved Parliament overshadows the artist’s previous highest sale of Keep It Spotless, that sold for US$1.9m at Sotheby’s New York in 2008. The 2007 piece was originally a Damien Hirst painting that Banksy defaced, with the British artist adding an LA hotel maid known as Leanne pulling up Hirst’s piece and sweeping rubbish under the painting.

If you’re a fan of Banksy or an art lover in general and based in Sydney, be sure to get along to ‘The Art of Banksy’ exhibition currently being held at the Entertainment Quarter.

RELATED: Learn all about the art market with this awesome video series