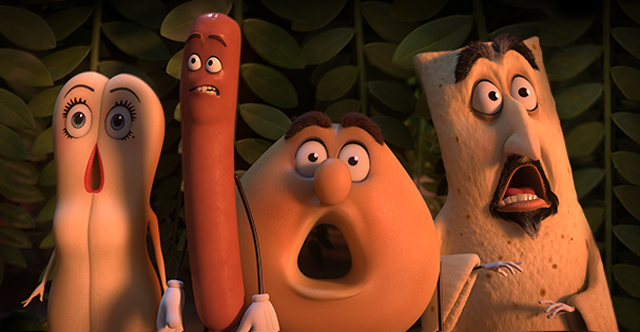 A year ago Seth Rogen showed a draft of his new animated film Sausage Party to Sacha Baron Cohen and he told this story about Cohen’s reaction to Howard Stern:

“Sausage Party appalled him [Sacha Baron Cohen] in some ways. We brought him to a screening where we watched the hand drawn version of the movie and he could not believe it — ‘that is the single craziest fucking thing I’ve seen in my whole life’ He said, ‘Just know you’ve gotten successful enough to make the craziest thing I’ve ever seen in my life.’”

Now the first trailer for Sausage Party has arrived for public consumption, and it looks every bit as debaucherous as it does hilarious.

With an all star cast alongside Rogen including Jonah Hill, Kristen Wiig, Michael Cera, and Bill Hader, Sausage Party tells the story of “one sausage leading a group of supermarket products on a quest to discover the truth about their existence and what really happens when they become chosen to leave the grocery store.”

Expect the film to hit theatres in August of this year.