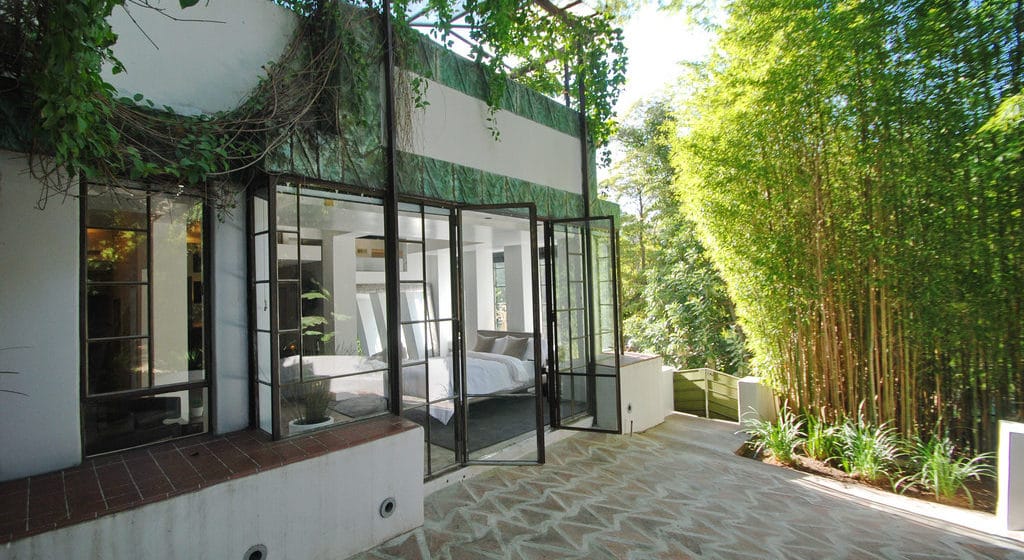 The breathtaking home was designed by Lloyd Wright, son of one of the 20th century’s most prolific architects, Frank Lloyd Wright. The father and son duo spearheaded the Mayan Revival design movement, which hoped to encapsulate the pre-Columbus era of Central America. Continuous themes throughout this style included intricate patterns and carvings, a rustic, sandy, and antique aesthetic, as well as pyramid-esque housing structures. The house is an eccentric design with a fascinating story, ending up in the hands if one of the biggest stars of the silent film era – Ramón Novarro.

The Mayan revival Lloyd Wright Samuel-Novarro House was built in 1928 for Louis Samuel, the business manager of Ramón Novarro. However, it was discovered that Samuel had embezzled funds from Novarro, and the ownership of the Mayan revival home soon changed hands to its rightful owner. Ramón Novarro then employed the assistance of good friend Lloyd Wright to expand the home and the garden. The Californian nature that hugs the sides of the property is an integral addition of its visual success. For good measure, art director Cedric Gibbons was also consulted to design the interior decor.

Since its original owner, the Mayan revival home has changed hands many times. Notable owners include Jerome Robbins, Diane Keaton, and Christina Ricci. In 1990, Keaton hired the eye and mind of Josh Schweitzer to refurbish and modernise Lloyd Wright’s original rustic vision. As a result of this retouching, among a sea of others, the Mayan revival mansion remains a beauty to this day.

Specifications include four levels of almost 2,700 square feet of living space, three bathrooms, three bedrooms, superb living spaces, and a large lap pool with a feature fountain. Green-copper lining accents the pure whites of the exterior, which converge well with the intermingling vines that the natural hillside exposure provides. The City of Los Angeles has also deemed the house worthy of the title of ‘Historic-Cultural Monument’, cementing the Mayan revival home’s legacy as one of the city’s greats.

For a modern take on the duality of design and nature, see inside this modern Hamptons farmhouse.

For more info on the house check out LA Conservancy.