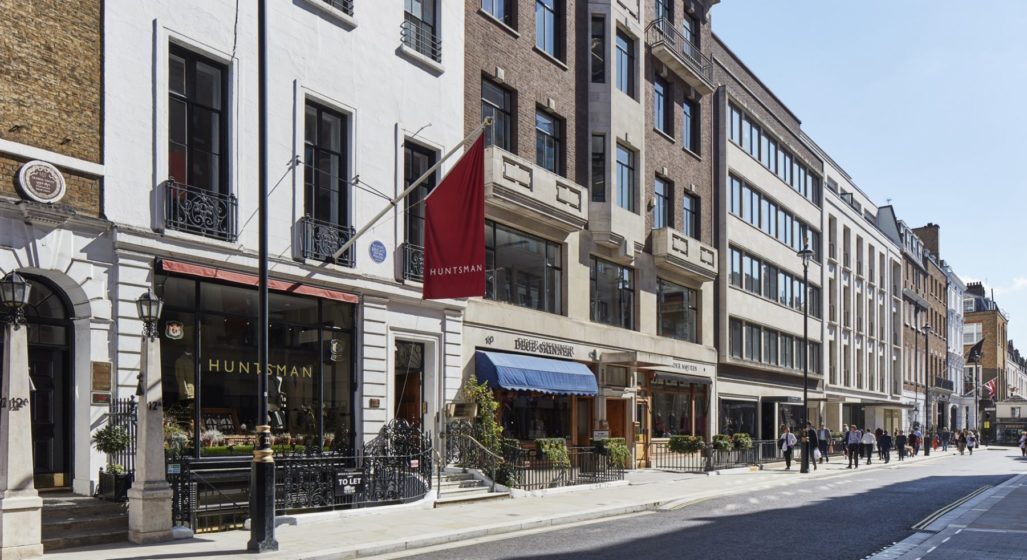 Savile Row – no other name, or destination, in the modern world, has such a direct influence on bespoke suiting. Although other locations in the UK and abroad in Paris have grown to cultivate their own influence, the ateliers that line Savile Row are unmatched in reputation. Moreover, the dandy – the man who prizes personal cleanliness and strictness of dress – is historically entrenched into the international interpretations of British culture complete with top-hat, cane, and prized three-piece dinner suit. The British dandy may be a stereotype, but the merchants and tailors of Savile Row continue to work tirelessly in their pursuit of suiting perfection and to this day the street retains its near-mythical renown.

Stretching from Vigo Street at its south end and Conduit Street to the north, ‘The Row’ traces its heritage back to the late 17th century when the first Earl of Burlington, Richard Boyle, purchased a large mansion on nearby Piccadilly. As the influential aristocrats were prone to do at the time, Boyle also purchased the surrounding land in order to secure his privacy and safety. This land was later developed by one of Boyle’s hereditary successors, who leased the various properties to other members of the aristocracy as London throttled towards its eventual position as the most influential city in the world.

This air of bourgeoise superiority would lay the foundations for the sartorial influence that Savile Row would go on to embody. Upper-class nobles, as well as successful men returning home from such events as the Napoleonic Wars, required clothing that matched their prestige. By this time in the early 19th century, Savile Row was well on its way to becoming the local capital of bespoke suiting. Tailors and manufacturers began producing suits for men other than just the nobility as the Industrial Revolution hit its peak. One of these men was Beau Brummell – perhaps the most famous dandy of all time. It was his influence (along with others) and advice that set the production in Savile Row into overdrive.

The true Savile Row was born when handmade, bespoke suiting consisting of the finest materials was the norm. Although such a high standard is not actively maintained elsewhere in the world today, Savile Row shop owners recall the rich roots of its history in order to guarantee suits adhere to a strict level of excellence. The transition into the 20th century saw the birth of the modern suit as well as Savile Row’s slow yet sure transition from mostly residential buildings to mostly retail buildings.

The suit quickly became the modern uniform of the everyday worker. Savile Row suits were not – and still are not – mass-manufactured suits. The various outlets on the street actively distanced themselves from the mundane, continually seeking to uphold their title as the finest suit makers in the world. This is a virtue that remains true to this day. A Savile Row tailor prizes the most exclusive cloth and forges his suits with expert craftsmanship and traditional techniques, made in exact conjunction with the wants and the needs of every unique customer (as discussed by Sam Hazelton from J.H. Cutler in the video below).

There have been many great suiting houses since the inception of Savile Row, many of which have sustained their businesses to the modern era. Said outlets tend to encompass a distinctly British house style, with origins in the hacking coat, consisting of neatly structured shoulders, padded chests and a slight waist flair. Beyond this, each company’s history and look possess subtle differences that create a compelling narrative.

Anderson & Sheppard is not as ancient as other inclusions on this list but there is a clear sense of sartorial pride and passion in all the tailoring house creates. Their mission is to create understated and timeless garments, made from the finest clothes available in the world. This shop is full of old art and murals depicting the glory of old Britain through the sleeves of the suit. However, the foundations of Anderson & Sheppard begin beyond the Isles, with the Dutch Frederick Scholte and Swedish Peter Gustav Anderson. These two immigrants laid the strong groundwork of the fine bespoke formalwear that Anderson & Sheppard proudly supplies to Prince Charles and beyond.

No. 1 Savile Row. It’s hard to find a more iconic shop address than that. But Gieves & Hawkes’ legend obviously extends before their geographical positioning. As one of the oldest bespoke suiting companies in the world, Gieves & Hawkes continues to specialise in Military tailoring – a craft that secured their continuing legacy. One of these military clients was King George III, which would later result in a number of Royal Warrants for the company. Other more recent, non-military clients include the likes of Charlie Chaplin and Sean Connery.

The story of Henry Poole & Co begins in 1806 with James Poole, who was one of the key makers for military tunics during the campaigns against Napoleon on the Continent. James died in 1846 and with this death his son, Henry, inherited the business. Henry had an eccentric and charismatic passion for suiting and came into prominence during the height of the dandy era. Henry went on to serve Queen Victoria as well as King Edward VII for all their royal sartorial needs and quickly became known as one of the finest bespoke tailors of the day. Henry Poole was the main player in cementing Savile Row and as the centre of the suiting world. This heritage continues today with Henry Poole & Co nestled nicely into no. 15 Savile Row.

Huntsman established themselves on Savile Row by displaying cunning tweed sporting jackets, which was an innovative style at the time. The brand is still arguably one of the foremost examples of tweed done well. Found in 1849, Huntsman has successfully continued to grow its brand through interaction with the general public as well as a clear focus on popular culture. Nowhere is this more evident than in the brand’s Kingsman campaign. Legend has it that the film’s director, Matthew Vaughn, was inspired by an experience at the shop when he was just 18. Vaughn imagined the beautiful classic walls playing as a facade to a deeper secret spy association. And so, decades after the event, Vaughn returned with his cast to film his movies in that same Huntsman shop.

Davies & Son proudly claim the title of the oldest independent tailor, shaping the very foundations of Savile Row bespoke. The company have excelled in the bespoke suiting business, acquiring other tailoring houses such as Johns and Pegg, Fallan and Harvey, James and James, Wells of Mayfair, and many more. By acquiring these houses, Davies & Son have incorporated a range of varied fashion interpretations while still remaining entirely unique to the rest of Savile Row. Past customers include a slew of kings, US presidents, F. Scott Fitzgerald, Calvin Klein, and even Michael Jackson. Davies & Son have maintained an unmistakable glamour throughout their history, and hope to preserve this well into the future.

Kilgour understands the sacredness of owning a shop of Savile Road. They are now seeking to merge their rich history with modern bespoke purity, maintaining their position as one of the most innovative designers in the street. Kilgour’s design is obsessive, addressing the symmetrical angles of every new piece, ensuring alignment and balance with each new piece. This obsession is influenced by art, architecture, and even music. Noted men who have donned Kilgour in the past include the likes of Fred Astaire, Daniel Craig, and the late Karl Lagerfeld. Kilgour was founded in 1880 as T&F French but have recently changed their name as their business evolves.

Consider it cheating, but London suiting cannot be talked about without at least a brief mention of Anthony Sinclair. Although not technically on Savile Row, Sinclair is renowned as the original craftsman and tailor for Sean Connery’s interpretation of James Bond. This look is credited as the ‘conduit cut’, and is still wildly popular to this day.