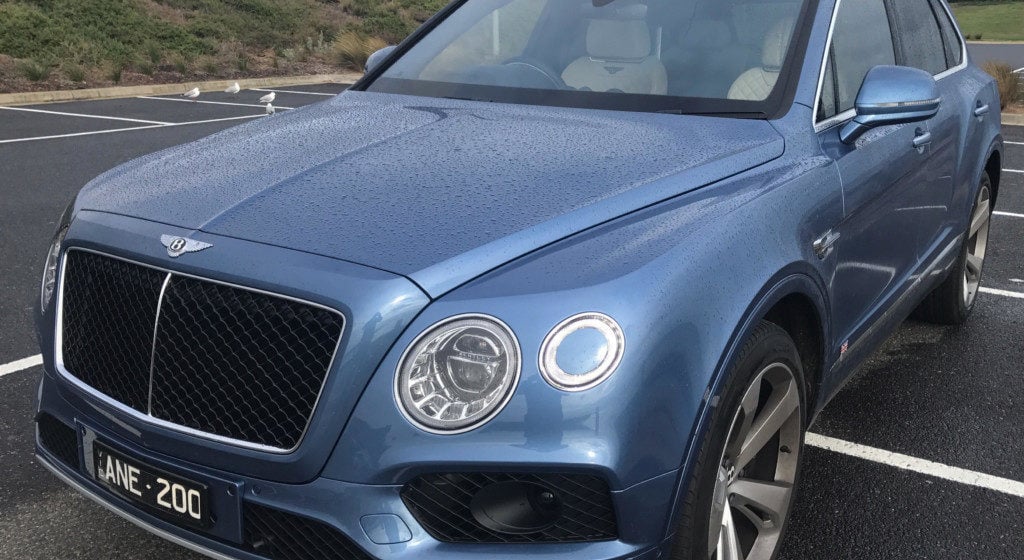 The world of high-end luxury SUV’s is an ever-burgeoning market, and one we’re seeing more and more luxury automakers dip their toes into. Love them or loathe them, there’s no doubting the market segment’s broader commercial appeal, regardless of whether or not a large proportion of those sold rarely see action outside of the city limits they’re delivered in. So when Bentley, a company that has traditionally scoffed at the term ‘SUV,’ announced the Bentayga back in September of 2015 we knew the British marque was following a global trend. Originally intended to be sold in its flagship W12 format, the V8 Diesel was announced for 2017, and we jumped at the opportunity to get behind the wheel of the world’s fastest diesel SUV for a few days after ANZAC weekend.

It’s the first time in Bentley’s 98-year history that one of its models has to be refuelled via the black pump, not the green one but the base of technology behind the Bentayga Diesel is borrowed from the broader Volkswagen AG family. It features the same 90-degree V8 as found in the Audi SQ7, producing a beastly 320kW with an equally monstrous 900Nm of torque, equivalent (in torque) to its W12 stablemate. But what’s truly phenomenal about the V8 Diesel is that every bit of that 900Nm, sent through a ZF Sachs eight-speed automatic gearbox, is available in full from just 1,000rpm. However, unlike the SQ7 the Bentayga’s powertrain is heavily recalibrated, with the emphasis moving away from sportiness and more towards refinement and translating to an 80kg weight saving over its Audi brethren, giving it a 0.1-second faster claimed sprint to 100km/h (in just 4.8 seconds).

We put this to the test, taking the Bentayga down through the Mornington Peninsula and making the most of the early Autumn weather and putting the ‘Sequin Blue’ beast through its paces. Despite not attempting to reach its top speed of 270km/h (the W12 claims to hit 301km/h) on Peninsula Link, the V8 Diesel’s long-distance driving capability really sets it apart. Rarely finding the need to raise the revs past 2,000rpm—even when bringing it up to the speed limit—the Bentayga effortlessly cruises on the highway while still keeping things quite economical at around 8 litres/100km, translating to a range of around 1,100km. But you might still be asking, is it a proper Bentley? Absolutely, and it’s one of the smoothest diesels we’ve ever driven, without the standard clatter you find in just about every other oil burning SUV on the market.

As you step inside the cabin it feels like a traditional Bentley but with a distinct touch of modern, with the 8-inch infotainment setup adorning the dash not detracting from the traditional Bentley-badged analogue clock face above it. Features like detachable Android-powered 7-inch screens and “Beats By Bentley” headphones for rear passengers power the Bentayga into the 21st century, but manage to maintain the style and elegance the British marque has become synonymous with. The interior is beautifully crafted with plush, hand-finished leather and wood with vast potential for customisation. In fact our car had a whopping $150,000 worth of options, meaning you’ll be waiting quite some time for delivery after you tack on the current 5 month order-to-delivery wait time.

Spending even short time we did with the Bentayga Diesel, its clear how much it really delivers on the mission set out by the team in Crewe, and is far more than just a Bentley-badged SQ7. Its day-to-day performance and drivability deliver an unparalleled driving experience, while its refinement takes the Bentayga to the next level in terms of style and comfort, giving it all the traits that make the marque special.

The Bentley Bentayga Diesel is priced from $335,000 plus options and on road costs.

We’d like to sincerely thank the team at Lance Dixon Bentley for the opportunity to get behind the wheel of the Bentayga Diesel.