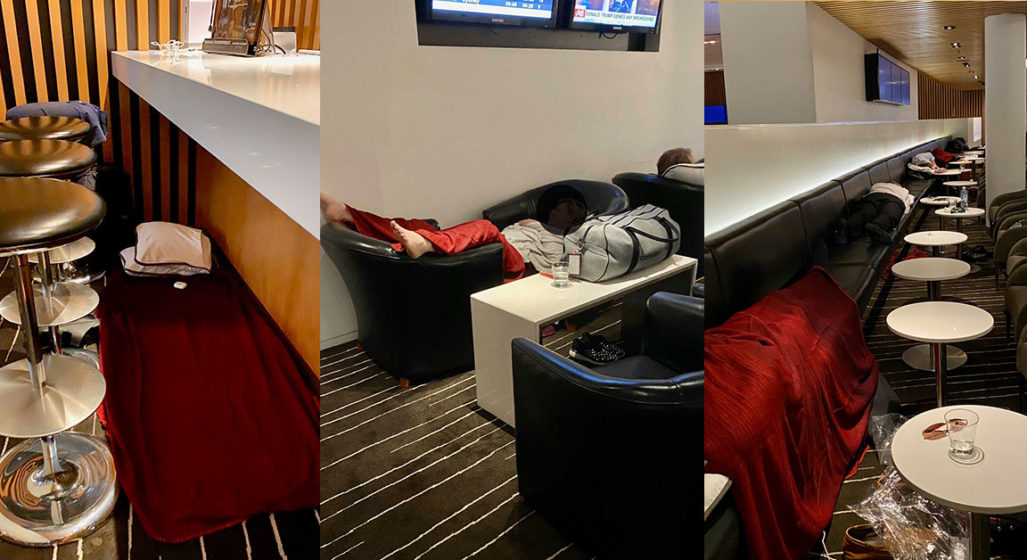 At roughly 1 am on Tuesday morning, I channelled my inner child and built a fort, on the floor, under a desk, in the Qantas Club at Canberra Airport. I arranged four stools to protect me from possible intruders and laid a David Caon cloth over the coarse carpet to rest myself before the battle that the impending hours would surely bring. I chose the Business Centre as the base of my operation, positioned strategically under a desk with a charging station to juice vital devices. At 3.13 am, after a mission to the bathroom, I discovered a second wrapped blanket in close proximity to a snoring businessman and without second-guessing whether it was spoken for, commandeered it. It was every man for himself.

On Monday afternoon, I left Byron Bay for Sydney. The journey took me just shy of 24 hours. What eventuated as the day (and night) continued on was nothing short of farcical, and as I lay in my fort, shivering on the floor, I couldn’t help but think about how badly the situation had been managed and how desperately the issue of Sydney Airport’s curfew needed to be addressed.

We left the boomer stronghold that is Byron Bay just before 1 pm and drove the 2 hours to Brisbane in the lovely Porsche Panamera. Upon returning it, my brother and I then headed to the airport with a glimmer of hope that we might be able to get on an earlier flight and beat the impending Sydney storm.

For myself, neither happened. I don’t even know why I bother getting my hopes up or asking – it doesn’t matter what fare class I am, for some reason I never get to fly forward on Qantas. And why, in 2019, if I have a flexible fare, do those changes need to be done through the travel agent that booked it? It’s my ticket with my name on it, if I want to go home a couple of hours earlier then originally planned, and there’s a seat available, then I should be able to do it. At the very least, it would save Qantas on the multiple beverages and plates of food I’m likely to consume from waiting in the lounge. But that’s another matter.

A shell of my former self, following three days of absolute alcoholic obliteration, I trudged to the Qantas Business Class Lounge to suffer for three hours before my flight. From there, the evening went from bad, to worse, to completely fucked.

The weather in Sydney turned and as it always does when something goes wrong at Sydney Airport, Australian domestic air travel capitulated like ‘Lay Down’ Sally Robbins, and just as it was following the infamous 2004 Athens incident, the nation responded angrily.

Our 19.05 scheduled flight eventually boarded and departed at roughly 19.50, crammed with flyers from cancellations that afternoon. My relief soon became distress as the Captain announced that we’d be entering a holding pattern due to aircraft congestion following the weather delays and that it would make the flight an additional hour-long, which by Sydney time would put us dangerously close to the 11 pm curfew. As our 1-hour flight became 2 and we circled above the Hunter Valley, the only thing that was descending was cabin morale.

You see, Sydney Airport’s archaic 11 pm to 6 am curfew was introduced in 1995 to manage noise pollution. Back then, the population was a million people smaller and total airport passenger traffic totalled roughly 20 million per year (in 2018, the airport was used by 44.4 million passengers). The curfew stipulates that only 80 planes can take off or land in an hour, despite Australian aircraft flying 3.41 million hours in 2018 compared to 1.94 million in 2002 (that’s the earliest report I could find).

Consider for a moment, a piece of legislation that passed (and has since been left untouched) at a time when the latest Packard Bell computer arrived with 8 MB of memory and a 420 MB hard drive and what your job would be like if you were using that computer today.

I can’t even begin to comprehend how many technological advancements there have been in aviation engineering since 1995 to increase efficiency and combat noise. The current Boeing 737 Max, albeit a death machine, was designed to be 40% quieter than the previous model, the 737 Next Generation.

Development for the 737-300 Classic, which was the preferred choice of Ansett at the time (they operated 25) and preceded the 737 Next Generation, began in 1979. Sixteen of Ansett’s 737’s were delivered in 1991 and all were exited shortly after the airline ceased operations circa 2002. Qantas does not operate a single plane delivered prior to 2002 and the average age of their 737 fleet is 11.6 years, yet we still haven’t addressed regulations brought in to combat noise for planes that would be almost 30 years old if they were still flying today. *They’ve all been scrapped.

With our respective evenings stalled at 30,000 feet, someone announced that those in power were seeking dispensation so we could land after 11 pm, which almost got a cheer. Then 10 minutes later, that announcement was retracted.

We were being diverted to Canberra, our dispensation request had been denied. We landed in Canberra minutes after the Sydney curfew cut off, taxied to a stop and waited – now people were getting shitty. Seatbelt signs were disregarded as frustrated flyers began pacing the aisle. Muttering and disbelief filled the cabin. When my AirPods croaked out their final track and died, I searched for a sharp object to end it once and for all. Then a voice from the PA. We’re refuelling and returning to Sydney with dispensation to land – the crowd erupts.

Alas, the crew had spoken too soon. Another classic stitch up from Qantas. There was no dispensation at all. We disembarked the plane.

The Dispensation Guidelines dated on the 12th day of May 1996 states that a dispensation may be granted only when a Minister is satisfied that exceptional circumstances justify the take-off or landing. While the general guidelines concerning weather were gambled on by Qantas, who, to be fair, could have cancelled the flight and put us all up in Brisbane, it’s the extenuating circumstances I thought I’d highlight, specifically the last two; the number of passengers involved; and the severity of the likely hardship.

174; and like a scene from a stadium post-Hurricane Katrina.

We’d been diverted to Canberra on the last Parliamentary sitting week of the year. So with nowhere for anyone to stay, we were jostled into the Qantas Lounge, thrown a bag of Caon cloth and forced to enter survival mode. A full 737 took to every single inch of the Qantas Business Class and Club lounge, sprawled across whatever furniture they could find, in sleeping combinations that hurt my back just looking at them.

Australian Federal Police patrolled the scene like we were a chain gang resting under a tree in the afternoon shade. Those that hadn’t found a perch were lined up in a futile attempt to find out their fate the following day. With multiple flights diverted, it was anyone’s guess when we’d finally make it onto a flight. Couldn’t we refuel and fly the same plane back post curfew the next morning? Of course not, the crew had to have their mandatory 10-hour break, while the will of almost 200 others was about to do the same thing.

A measly $200 was on offer from Qantas to anyone that could find somewhere to stay but with systems down and the possibility some of us would need to be back at the airport at 5.30 am for a 6 am departure, it was hard to justify the $480 for a few hours at Queanbeyan’s Central Motel.

At 3.28 am when my Qantas app finally displayed my 9.45 am flight, I called 20 hotels and motels looking for a room to salvage whatever night I had left. Those who did answer laughed, as I did when I checked what an Uber would cost me to get back to Sydney, had I actually been able to access my luggage, which, with no ground staff to unload it, was still locked in the plane.

As 4 am loomed, I accepted my fate and returned to my sleeping quarters, admiring my work and wondering how differently Bear Grylls would have done it if he was here. When the PA sounded again at 4.28 am after 30 mins of shut-eye, we were told to exit the lounge, collect our bags and recheck them in at 5 am, which became more like 5.15 am and another glorious 45mins standing in a line.

Fortunately, I got to spend the remaining 4 hours of my morning back in the Business Lounge, eating and resting while thinking about the not so lucky souls downstairs in the terminal, eyes hanging out of their heads, hunched over a burnt Hudson’s coffee they had to pay for.

Monday night was beyond absurd and no doubt exacerbated by the fact it came from Qantas. Elderly folks forced to curl up on armchairs with wafer-thin blankets, young parents trying to calm exhausted crying children and fully suited blokes lying on the carpet covering their heads with their Brioni suit jackets.

I understand that thousands of people live under the flight path, but that’s their choice. Likely hardship peaked on Monday night and it was no one’s choice, except the Minister who denied us dispensation. Sydney Airport – it really is time for a change.

If you’d like to hear myself and the team chat about the state of Australian domestic travel’s dependency on Sydney Airport – listen to this week’s podcast.