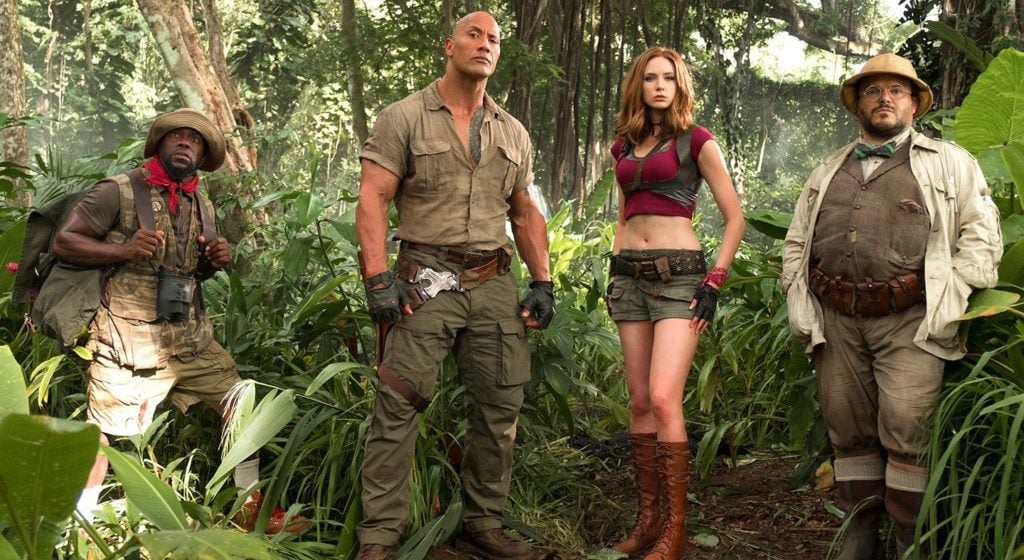 On Friday morning Columbia Pictures shared the trailer for the new Jumanji movie, Jumanji 2: Welcome to the Jungle. You can watch it above.

I’m not sure about you, but as I was watching the trailer, my feelings were perfectly summed up by random Facebook user, Mick Turner. Mick had written the following in the comments section:

“You’ve massacred what was a magical, timeless classic which appealed to all ages and genres.”

Now, I’m going to do something a bit rash here and review a movie before I’ve even seen it. I am of the belief that contrary to what we were taught at school, sometimes it is necessary to judge a book by its cover – and judging by that absolute STI of a trailer, I think now is one of those times. In saying that, if my assumptions turn out to be wrong, I will quite happily shut my laptop for good; never to write again.

So let’s get into it.

In the age of sequels and remakes, franchises such as The Avenger’s reign supreme. The Rock has called the movie a “continuation” of the Jumanji story, but let’s call it for what it really is: A remake.

With the exception of Shrek 2, these remakes and sequels are generally nothing more than moneymaking pieces of shit. I’ve sat by whilst Hollywood has butchered classic after classic. Ghostbusters, The Karate Kid, King Kong (2017), Pirates of the Caribbean (everything after the first instalment) and Point Break are just a few movies that should have been left alone to age gracefully.

No longer will I sit in silence.

Some movies are sacred and should remain untouched. Jumanji is one such movie. This film was my childhood; a magical wonderland. Unlike the remake appears to be, Jumanji was not a generic action movie punctuated with a few cheap laughs; it was far more than that. The shit had layers.

The main issue I have with the new Jumanji movie is the cast. I’m not going to talk about Karen Gillian, because to be perfectly honest I don’t know that much about her (no offence intended). I’m also going to skip over the inclusion Nick Jonas, because like most child celebrities the bloke didn’t have a childhood. I’d rather him live it out through this movie instead of trying to recapture it in the same way Jacko did.

Instead, first on the chopping block is Jack Black. In an interview with The Breakfast Club, rapper Vince Staples recently revealed that he was tired of people saying that the artist formerly known as Lil Bow Wow wasn’t hard. To quote Staples, he said:

It’s the same with Adam Sandler. Although Sandler’s movies haven’t been up to scratch lately, I’m not going to sit here and disrespect the man that made Happy Gilmore. In saying that, I think everyone – including Sandler and Black (awesome name for a law firm by the way) – know that their best days are behind them. Even if Black did recapture that magic, there is no way he is going to be able to produce a performance even close to what Robin Williams gave us in the original. Not a chance in hell.

Also, Black should know very well what it feels like to have a remake of one of your movies butchered. The recent King Kong remake released this year was as bad as it was weird. They gave Kong defined abdominals and made him walk upright like a man – a characteristic that made his infatuation with Ann less Dr Doolitlleish and more statutoryrapeish.

Now, I went easy on Black, because I’m not one to kick a man when he’s down. However the next two cast members are doing more than fine, therefore I am going to be far more candid in their critiques.

Second up on the chopping block is Kevin Hart. Comedian Chris Rock once famously said that all comedians want to be rappers, and all rappers want to be comedians. Ever since achieving his life-long goal of reaching super-stardom, Kevin Hart has been a perfect example of the former. Talking about “the grind”, uploading videos to social media of you working out and referring to yourself as a “comedic rock-star” is very unfunny behaviour. I know I’m going to cop some shit for this one. Before you scold me though, can I urge you to go back and watch some of Kevin’s stuff when he was still hungry, and then compare it to some of his more recent material: The money and fame has changed him. It is for this reason that I do not think Hart is a good fit for Jumanji; a movie made famous by the extremely humble Robin Williams.

The last cast member I want to address is the people’s champion: Dwayne “The Rock” Johnson. Now I’m not questioning The Rock’s character, he seems like a real righteous dude. However, there is one particular scene in the trailer featuring The Rock that has me really concerned about this film. I’m speaking of the scene where The Rock is telling himself not to cry. I took this as an attempt to recreate the scene from the original Jumanji, where Alan Parish (Robin Williams) notices that Peter (Bradley Pierce) is sobbing. In a ‘tough-love’ attempt to comfort Peter, Alan repeats the words that his late father – whom he hasn’t seen since he was a boy – once spoke to him:

“What are you doing? You don’t cry alright? You keep your chin up. Crying never helped anybody do anything, okay? You have a problem, you face it like a man.”

Goddamn, I’ve got shivers just typing that. You compare that emotionally complex scene, to the ridiculousness of a gigantic man telling himself not to cry in a high-pitched voice. I dunno’, it just felt like they were taking the piss.

Furthermore, in terms of The Rock and Kevin Hart working together, there is no doubt that they have had good chemistry in the past. But how much longer can they stretch the joke out? The Rock is big and strong and Kevin is small and scared. We get it. Move on.

Alas, this moving on seems to be a problem most of Hollywood finds challenging. Disney is now up to their fifth Pirates of the Caribbean movie. To say they are milking the franchise for all it’s worth is an understatement. At this point the milk is long gone. However, Johnny Depp is still double-hand wringing the teat of the beast even though all that is coming out now is blood. Or perhaps the franchise is best described as a dead horse that Depp’s character Captain Jack Sparrow is repeatedly kicking in attempt to stir it. I can picture Sparrow now, constantly laying boot after boot into the dead weight until he finally realises its dead and recoils in mock terror, saying something like “Sorry ‘bout that Pony”, before frolicking off down the beach in search of another storyline.

The reason I have chosen to single out the actors and not the directors and writers, is because without these stars these remakes would not be possible. Without these stars remakes don’t even have a chance of living up to the originals. In most cases the signing of people like The Rock is also the only reason these movies get commissioned. At some point they have to be held accountable.

Now these actors aren’t stupid, when recreating these films they would be well aware that they aren’t making another classic. So why do they do it? I think the answer can be found in something the great Gucci Mane once said:

“If a man does not have the sauce, then he is lost, but the same man can also be lost in the sauce.”

It would seem that Depp, The Rock, Hart and Black are all lost in the sauce.

Now I know the old movie is still there, and that this remake does not permanently delete it from the archives. I know that. But it just seems disrespectful to be making money off of Jumanji’s good name.

To be perfectly honest, I think Robin Williams would be turning in his grave.