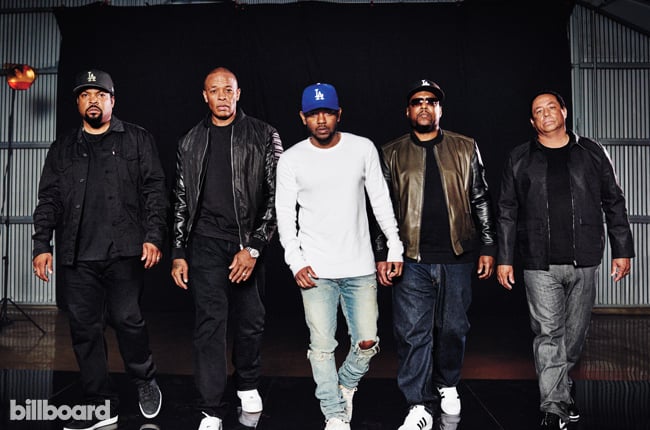 N.W.A are more than a seminal rap group from the late 80s early 90s. Individually and together they are arguably one of the greatest legacies in the rap game of all time. Through their music they were able to communicate the harsh reality of life for black teens in the gang-riddled suburb of Compton, South Central L.A.

Their no holds barred attitude saw them court controversy, fame, and like most artists ahead of their time unfair blame for glamorising the socioeconomic barriers they faced daily. 20 years after the death of founding member Eazy-E. Following this, the group have reunited to promoteStraight Outta Compton, a film about the rise of the rap powerhouse.

Kendrick Lamar, a protégé of Dr Dre (the man can now claim Kendrick & Eminem, two artists who influenced all around them just like their predecessor) sat down for Billboard with the surviving members to talk about the experiences they’ve had from coming up out of Compton to being immortalized on film.

Kendrick, also a Compton native, is currently the most respected artist in the rap game. So sit back and enjoy watching the man of the moment interview the men who inspired him and helped preach light to many who couldn’t see it.

Straight Outta Compton hits cinemas on the 3rd of September and so far has received largely positive reviews from critics. We can’t wait to see it.