Kendrick Lamar has been the centre of the Hip Hop scene over the last few months. The dropping of singles ‘The Heart Part IV’ and Humble as preludes to the acclaimed ‘DAMN.’ have made him the source of intrigue and controversy. One of the undeniable things about K Dot is that he is a relentless competitor.

August 13th, 2013. The fabled ‘Control’ verse where Kung Fu Kenny takes swings at literally all of his competition has been the starting point for a majority of his beefs now. This unapologetically aggressive style has rubbed some the very wrong way, and it’s clear Kendrick doesn’t really give a Damn.

With that in mind, the following is a beginners guide to all of the beefs involving Kendrick Lamar right now.

Whenever you talk about beefs and Kendrick, one should start with Sean, not the man reppin OVO. It was in fact Big Sean’s song ‘Control’ that caused much of the tension with other rappers. Kendrick’s verse went at everyone including Sean himself. Although Sean said that this didn’t really bother him, this is the only discernable starting point of a frustration Sean could have with Kendrick. It should also be noted that ‘Control’ itself wasn’t featured on Seans album Hall of Fame, despite being the most noteworthy track at the time.

He started dropping subs directed at Kendrick in a freestyle titled ‘Me, Myself and I’ in 2015

Rappers who was killin shit, lately I can’t feel that shit

Y’all used to didn’t feel my shit and now y’all like, “You hear this shit?”

He had even more subs for Kung Fu Kenny on ‘No More Interviews’ in 2016.

And I’m just not impressed by you niggas rapping fast

This all leads to the current day, with Kendrick firing more direct shots at Big Sean. On ‘The Heart Part IV’ Kendrick is rumoured to have taken a whole verse to address Sean directly.

Tip-toeing around my name nigga you lame

‘I was just playing K-Dot, c’mon you know a nigga rock with you, bro’

Oh you don’t want to clash? Yeah nigga I know

On ‘Humble’, he constantly uses hooks notably used by Sean (‘lil bitch’ and ‘hol up’), as well as the direct shot that central idea of the track being in direct conflict with Sean saying his ‘humble attitudes’ in ‘No Favours’. Kendrick is directly telling Sean to sit down and be humble.

We likely haven’t seen even close to the end of this rivalry.

This is the modern day Cold War of Hip Hop. Both men have cautiously stepped around each other, taking some subs but not engaging in direct nuclear warfare. This begins in 2013 with Drake saying on ‘The Language’

I don’t know why they been lyin’

But your shit is not that inspirin

Enter Kendrick, with a small but not insignificant barb at Drizzy on ‘TDE Cypher’.

Yeah, and nothing’s been the same since they dropped “Control”

And tucked a sensitive rapper back in his pajama clothes

Kendrick would deny that this is a shot at Drake, however the next two are shots at Drake, first on the universally acclaimed ‘King Kunta’ taking aim at ghost writer rappers.

I can dig rappin’

But a rapper with a ghost writer? What the fuck happened?

Then he goes in twice on Dr Dre’s album ‘Compton’. First on ‘Darkside/Gone’, where he steals one of Drake’s most famous hooks in the diss itself.

But still I got enemies giving me energy, I don’t wanna fight now

Subliminally sent to me all of this hate, I thought I was holding the mic down

Then again in ‘Deep Water’

They liable to bury him, they nominated six to carry him

They worry him to death, but he’s no vegetarian

The beef is on his breath, inheriting the drama better than

A great white, nigga this is life in my aquarium

Now from here the tension becomes a little bit more unfounded. Watch the video below where Marcellus Wiley of ESPN talks about a destroyed interview on his program ‘SportsNation’

WHAT! If this is referring to Kendrick and Drake (which is the heavy favourite in terms of who he is talking about), one could only imagine the residual tension between the two most popular artists in the game. There are a number of things that can be seen as subs at Drake from Kenny on ‘Damn.’, but nothing that provides a significant insight into the real animosity between the two.

This is the cold war that has the potential to get very very hot in the next couple of years as the two artists battle at the top of the charts for supremacy.

Billboard.com and Being Outside of the Top 5 Rappers of All Time

Kendrick has an obsession with being the greatest rapper of all time. It’s consistently seen throughout his music. However when Billboard ranked their top ten rappers of all time, they rated him ninth (It should be noted that this atrocity of a list left off Tupac Shakur, which is at least puzzling and at most criminal).

It’s been two years since the list was released and it’s fair to say he hasn’t back off his opinion that he is the GOAT. From his tweet reading simply ‘Mr 1-5’, to this lyric on ‘ELEMENT’.

Mr. One through Five, that’s the only logic

Fake my death, go to Cuba, that’s the only option

Kendrick is incredibly open about his greatness and he’s actively suggesting that he is not just the greatest rapper alive, but in fact good enough that he could occupy all the spots from 1 to 5 on any list of the greatest rappers ever.

It would be an understatement to say that Kendrick Lamar dislikes Fox News and Donald Trump. Mr Duckworth has been one of the most socially conscious and influential artists in the last half decade. He’s made provocative comments on all kinds of issues like alcohol abuse on ‘Swimming Pools (Drank)’, police brutality on ‘Alright’ and on Black America in a insightful acapella verse on ‘i’.

However in more recent times, Kendrick has been taking more direct shots at individual’s he feel are doing wrong by his community. First at the new President of the United States Donald Trump in ‘The Heart Part IV’.

Donald Trump is a chump

Know how we feel, punk? Tell ’em that God comin’

And Russia need a replay button, y’all up to somethin’

The level of criticism that Kendrick has had of the police and of certain aspects of American society put him in the crosshairs of notorious conservative American media outlet Fox News. One of the most blatant shots that Kendrick takes is at Fox News, even using part of this segment on the network at the end of the track ‘BLOOD’.

He also takes a more direct shot at analyst Geraldo Rivera (who said that hip hop does more damage to young African Americans than racism in the above video) in the track ‘YAH’.

Fox News wanna use my name for percentage

Somebody tell Geraldo this nigga got ambition.”

Geraldo has since doubled down on his comments that Kendrick is destructive for the culture, which suggests that Kendrick may have more ammunition to use in future disses directed at the Fox News personality.

After ‘DAMN.’, it’s hard to make an argument that Kendrick Lamar isn’t one of the greatest hip hop acts in the history of the game. His lyricism and flow is unquestionable, with the hard hitting messages behind every song setting him apart from other rappers.

However it is also his attitude that sets him apart. In a time where everyone is perceived to be too friendly in their competition both in relation to hip hop and sports, Kung Fu Kenny isn’t trying to make any friends.

Kendrick is out take the throne and make everyone else a mere distant memory. 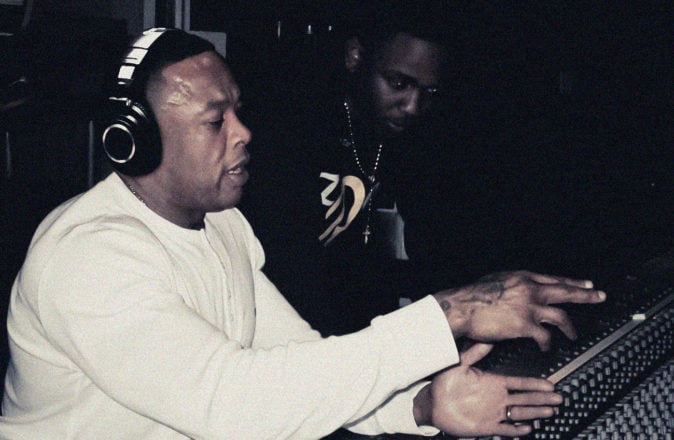