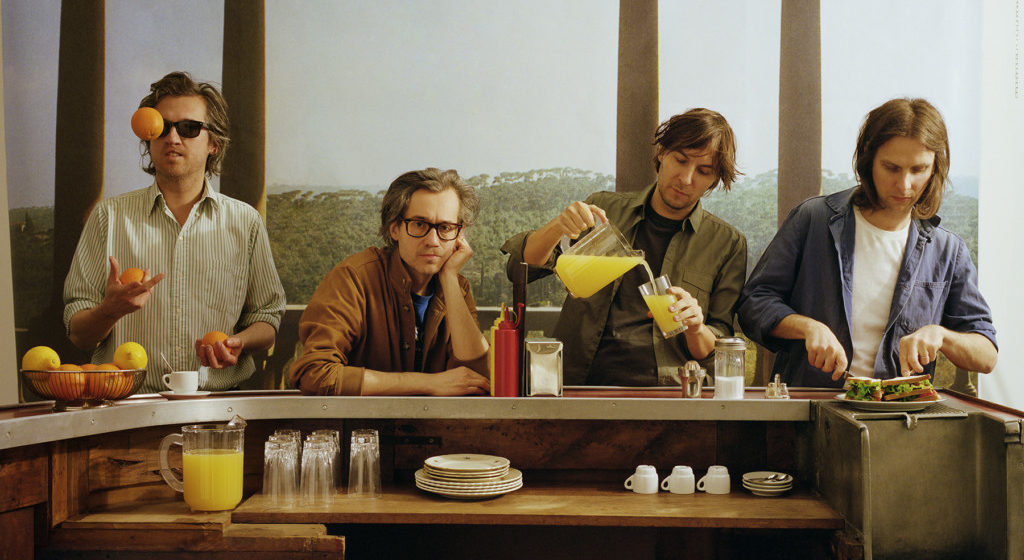 Wildly talented alt-rock band, Phoenix, return onto the international stage with a monster of a new album. Having creatively percolated for the past year and change, we sat down with front-man, Thomas Mars, to talk optimism in a pessimistic world, The Beguiled, and when Aussie fans can expect to see the enchanting French natives again.

As evident from the moment you press play, this new album is bolstered by very European dream-pop and indietronica sensibilities rich with synths. What was the process like?

When we start going to the studio, the first few weeks are very exciting… It’s just a world of possibilities… What we usually do is we choose some sort of instrumental palette, what instruments we like, and what which ones to bring in, which ones to surround ourselves with. And then I think we are in a bit of denial, what we don’t realize is sometimes if you play the synthesizer an inch closer than the guitar, it’s just right there. You end up playing more. There’s a bit of luck… a lot of things are purely the work of the unconscious… Then it becomes a little harder because once you record a little, you become obsessed. You want the direction you’re going to be worth spending a lot of time, that you won’t get bored. That this new direction is not just familiar to your brain so you like it because it’s familiar… to keep your interest… that’s the hardest part.

Ti Amo paints a picture of like a fantasy, a paradise of Roman vacations, and the excitement of falling in love. Did you have specific ideas/memories in mind when you were composing?

What was strange was we were making a record that was in total contradiction with the atmosphere of Paris at the time. The time was dark, it was just a weird environment, and at the same time we were in the studio making this joyful, idealistic, light, simple music… So I think we just fantasized. It wasn’t really escapism or denial, it was just getting music back to its pure function, which is a world of possibilities, and that’s all it is… That was our biggest challenge, to then just create our language in the record using English, Italian, French.

Suffice it to say, this album has arrived at a very interesting time in the world. I don’t have the tell you about the events that have occurred in Paris alone recently. The US becoming more chaotic by the day. The entire incident in Manchester. Among the seemingly hopeless and anxiety ridden politics of today, you’ve triumphed with that signature Phoenix optimism.

Every time we start a record, we think of it as our first record. It has to be new, it has to be a new sound, it has to be a new direction. And I think it’s always in contradiction with the times, with what’s going on. And I’m not sure what it is, whether it’s trying to force destiny, or if it’s pure… if it’s trying to cope with the times. But I know that Serge Gainsbourg would write his love songs during his most heartbroken times, you know? And the opposite, he would write the saddest songs… like Je Suis Venu Te, Dire Que Je M’en Vais, and he wrote it when he was totally in love.

Maybe it’s a French thing, that you’re always alert of what’s coming next, or you’re just anticipating what’s coming… I think we just can’t help ourselves… When Proust talks about his grandmother, she comes home, and when she arrives, he’s already sad because it means she’s going to stay there a little, and then she’s going to leave. So the moment he recalls is the anticipation, when she’s not really there, and I think I can really relate to that… It doesn’t help your daily life, but it does enhance creativity, and the fact that you’re constantly in this melancholic state. But this is an optimistic record… the layers of… the chord modulation, the lyrics.

Do you find that as time goes on, this optimism becomes a consciously political statement of, “we’ll make it through”, or is it purely stylistic?

It wasn’t meant to be… because we’re not good at statements in general… A lot of people think this is one, so I guess it could be. We were nervous when we made this record because, when bad things happen in the world, when you’re a citizen of the world… [you] act. You enter the resistance. And it’s not that we don’t want to do it, we just know we’re bad at it. The four of us, growing up, making music… it was a stream of consciousness… It’s always chemistry, it’s never calculated. We’ve always found that this has more depth, and personality, and tells more truth about us.

My personal favourite track is Fior Di Latte, primarily because it was so reminiscent of my experiences travelling overseas, falling in love with the city and the people.

I’m very glad it’s your favourite, because it’s my favourite too. I remember them looking at me like, “Are we really going to have a chorus that’s just ‘Fior di latte’?”, because it’s really awkward… We loved the sound of it and we didn’t want to change it… It’s my favourite song to play live so far.

In addition to working on this new album, Phoenix has also been building the soundtrack for your wife Sofia’s upcoming film, The Beguiled. What can you tell us about the soundtrack and the film?

It’s in Cannes right now. When I saw the first references for the movie… Sofia, she knows exactly what she wants. She’s pretty remarkable when she gives her references, and they will work exactly with the tone and the atmosphere of the movie. She knew she wanted synths, she knew she wanted dark synths… there’s something contemporary about it. There’s always a gap… music helps to make it feel more contemporary. To show her personality. The first two things we tried were the ones that worked right away… the first harmonies, those long notes, and slow chord changes… We spent a lot of time working on it, slowing it down, and just changing the pace of it. It’s really fun when you match with the visuals, and then suddenly, things make sense, and they shouldn’t make sense because they don’t come from the same… it’s not the music of the time. Scoring a film can be difficult… We got lucky right away.

I have to say, us Australian fans were disappointed when we realized the world tour didn’t include us. Any hints as of when we can expect to see you guys visit us here down under?

I think early 2018. We’re still trying to figure out where… the bad news is you have to be patient, but the good news is when we come down, the shows we’ll be playing will be much better than the ones right now [Laughs].

Phoenix’s new album Ti Amo is out this Friday. For more information on the release head here.