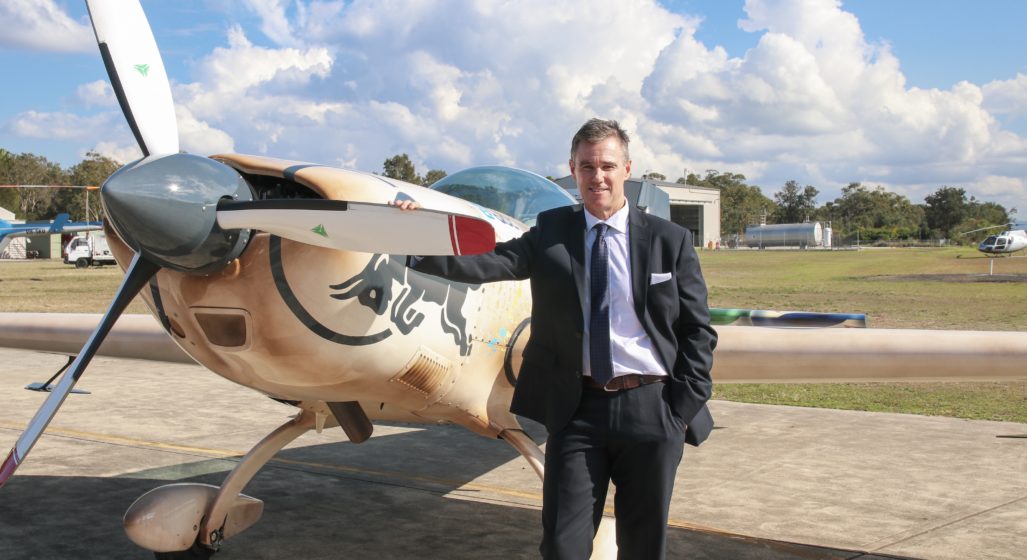 I’d only been in the room for a few minutes before Matt’s pragmatic and calculated military training instinctively kicked into gear.

With anyone else, they’d have said something like, “Yeah cool, let’s shoot a few snaps, go for a little fly around for a bit and have a chat afterwards.” But not Matt Hall. The whiteboard was out and the day’s program broken down. It could have been mistaken for that scene in Star Wars where Rebellion pilots were being briefed before blowing up the Death Star. I mean, yeah, that might be a little melodramatic, but it didn’t feel far off.

My two hours with Australia’s own ‘Top Gun’, former Air Force fighter pilot turned national Red Bull Air Race export, Matt Hall, was one planned to the minute; a theme of efficiency and preparation reigned true from the get-go.

Despite being one of our most decorated and successful pilots in recent Australian memory, Matt caught me off guard with his pleasantly genuine and modest attitude, the reason, perhaps, he was tapped on the shoulder by luxury menswear label Van Heusen to come onboard for their ‘Mentors’ ambassador program earlier this year.

Dressed to the nines and ready for action, before my brain could comprehend what was happening Matt was at the controls of his two-seater aerobatics plane as we barrelled down the runway at 200km/h.

The consequential 10 or 12 minutes played out very differently to how I initially imagined. They didn’t (pardon the pun) fly by. Surprisingly, every second of every G-force pulling turn made the hairs on the back of my neck stand up, slowing time down to the very moment I was living in, face melting and all.

As the blackness occasionally overran my vision – either I’d loss track of my breathing techniques, or 8G’s is just an incredibly bonkers strain on the body – I’d completely forgotten I had to interview the man almost immediately afterward.

Back on solid ground, a mix of adrenaline and Red Bull still pumping through my veins, I managed to string a few words together and fire off a volley of questions to unravel the man behind Australia’s own ‘Top Gun’.

Could you handle 8G’s with Aussie Top Gun @matthallracing? Hit the link in bio for our chat with the @redbullairrace legend. @vanheusenau #bosshunting

What would be your ultimate alternate career?

I’d love to sail around the world and get into yacht racing.

What was your favourite ever aircraft to fly?

I’ve flown so many that it’s hard to separate them, but I must admit that flying the WWII Spitfire…the nostalgia of flying that thing is absolutely incredible. There’s two of them out at Temora and I fly both of those.

What’s the most valuable lesson your time in the RAAF taught you?

Preparation and planning – if you don’t put the time and effort in before you go and do something you’re not going to get the result you want. I find that the more you plan the more you can enjoy the current moment while doing it. If I haven’t done enough when I get to the actual execution, I sit there disappointed, thinking back that I wish I could have done more.

What was your military callsign, and what would you have chosen if it was up to you? ‘Hallpass’, maybe?

Well, my callsign was a pretty original one, they called me ‘Matty’ [laughs]. I’ve never really thought of what I would have wanted to be called, but I’m pretty happy with that.

Do you believe one can achieve a perfect balance between arrogance and confidence?

There are some times you need to be arrogant. Fighter pilots need a touch of it. I believe that arrogance and confidence are almost the same things, apart from one difference – and that’s that confident people listen and arrogant people don’t.

The sketchiest moment in your racing career?

Definitely in Windsor, Ontario when I stalled the aircraft at low level in the race and departed controlled flight and hit the surface of the water. I was lucky enough to regain controlled flight just before impact and after impact, maintain control and fly away. Both wingtips touched the water, as did the landing gear and the tail. I was pretty fortunate in being able to get it out of that situation.

What’s your perspective on mortality?

Mortality for me…the older you get the more you come to terms with the fact that it will end one day. I’m becoming more risk-averse as I grow older. I think I have a reasonable amount of control about my destiny. I’m pretty comfortable taking the risks I do knowing that it’s all risk-monitored. But as I said, my greatest fear is something happening to my family that I can’t control.

Which flight or mission was the most nerve-wracking prior to getting in the cockpit?

My first combat flight in the Middle East. Strapping into an F15 Strike Eagle to go into war and not knowing what was going to happen. I was on a three-year exchange program with the United States Air Force (USAF) to go on their shock and awe mission during the second Gulf War, Operation Iraqi Freedom.

The high point of your career thus far?

It’s very hard to distinguish. One of them would be my first race win – to win a Red Bull Air Race which is renowned as the fastest motorsport series in the world was definitely a highlight. I’ve still got another step to climb though, and that’s to win the world championship.

What would you say is your favourite circuit in the world?

That’s a hard one, they’re all so spectacular. I’d probably say Spielberg in the Austrian Alps because you’re racing in the mountains. It’s a famous track and also where I had my first race win.

The low point of your career thus far?

I’d say it was after my race in Canada when I hit the water. That was the longest and the hardest I’d ever had to look at myself to determine if I wanted to continue what I was doing. I’d never ever questioned my ability and the direction I was heading in my career previously, and I haven’t really since, but that was a time that I had to spend a solid week thinking 24/7 about who I was and what I was doing. Air Race said they were happy for me to continue, so did my wife – and I wasn’t scared for my own life – but I was interested in what would happen to my reputation if I did it again.

Is there any part of ‘Top Gun’ that is so far removed from the truth that you find it silly?

There are things that are inaccurate, but the one thing that stood out for me is towards the end when the bogeys are 100 miles out of from the boat and then Maverick says “Mav supersonic I’ll be there in 30 seconds” – it doesn’t really happen that quick. That’s warp speed, not supersonic. I’ve done about 20 nautical miles a minute, which is Mach 2. That’s well and truly quick enough.

To book your own flight with Van Heusen ambassador, Matt Hall, head to matthallracing.com. You can shop the full collection at Van Heusen.com.au