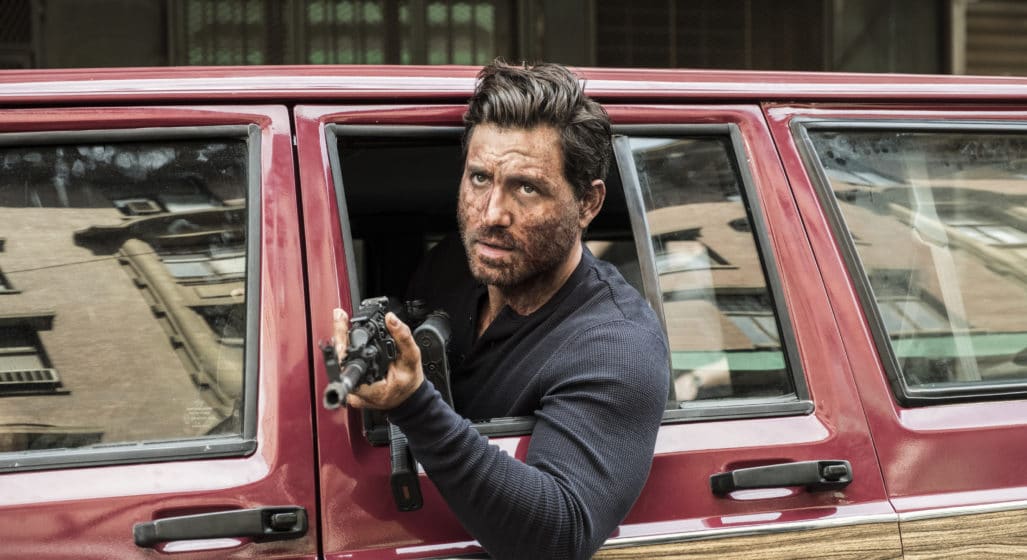 When it was reported that Netflix’s The Last Days of American Crime had earned a phat 0% on Rotten Tomatoes, I was intrigued. Not yet on board the hate wagon – but intrigued. Then the headlines started piling up, and I thought, “OK, there’s definitely something to this.” Having now viewed this multi-million dollar atrocity for myself, I can confirm: it is hands down the worst fucking film of 2020, perhaps even of the last several decades.

Let’s be very clear about something. This isn’t bad for the sake of being bad; like in an ironic and self-aware, “Haha, look what we did” kind of way. It’s genuinely embarrassing to watch. Through the stages of obtaining studio approval, casting, principal photography, editing, right through to its acquisition by Netflix – more than one person OK’d this dreck and eventually deemed it acceptable for public consumption.

So either a) the people behind the scenes hold the general population in very low regards, or b) several people failed to do their job. Though there’s an argument to be made that we’re now talking about it, meaning the aforementioned “job” was actually accomplished.

Directed by Olivia Megaton – a repeat offender of this nature who has delivered such cinematic milestones as Taken 2, Taken 3, and Transporter 3 – there’s a lot to unpack. The Last Days of American Crime follows the story of a bank robber named Bricke (portrayed by Edgar Ramirez) who seems perpetually confused about his own existence, more through questionable acting choices than design. Bricke decides to commit a “historic” final heist before the US government launches a nation-wide signal that will magically prevent people from ever committing another crime.

Right from the outset, you can tell there was an attempt to express some sort of social commentary. A movie about authoritarian government in this climate – how could you possibly miss? But miss they did, and before long, Megaton fell back on what he knows best:

I mean, seriously – at what point am I supposed to believe a father and son are going to kill one another with firearm and tomahawk because the latter banged his stepmother? It’d honestly be laughable to watch if it hadn’t been so tragically executed. And don’t get me started on the very same son’s weird sexually charged moment with his biological sister not five minutes prior.

As a general rule of thumb with The Last Days of American Crime, you can expect anything that doesn’t need an explanation to be inorganically broken down, burning far too much screen time. While anything that might need to be addressed in less than half a sentence will be firmly ignored.

The cherry on top of this diarrhea sundae is how the film spends over two hours clumsily committing to what was a shaky concept to begin with… only to walk back on it entirely with the worst possible explanation. Spoilers – it’s fucking nihilism. The entry-level philosophical bullshit that literally means nothing. Wow, how convenient (!) The universe-altering radio wave that hinders your uninhibited free will can be shrugged off if you just don’t care. That’s it – that’s the one unifying motif throughout this unmitigated mess of a film. You can’t get hurt if you never really cared.

At this point in time, I fear how profoundly terrible this was has been lost on you through words alone. Which is why I’ve intentionally left some doozies out as a surprise for that juicy firsthand experience. Because as much as I hate to serve The Last Days of American Crime any more victims of both time theft and intellectual necrosis, it’s one of those things where you just need to have a taste to understand.

Here’s how the first twenty-five minutes went down on my end:

1:19 – I can already tell the director spends his spare time sniffing Tarantino’s jockstrap.

2:03 – Confirmed, right down to the opening track.

2:38 – How does one conveniently forget they’re doused in gasoline?

3:24 – A grown-ass taxpayer with a mortgage was paid official currency to write this cornball dialogue.

4:17 – A lot of interesting acting choices going on so far, it’s almost as if no one gave a shit from the start.

5:29 – Oh good, some easy exposition laid out on a poster we’re spending more than thirty seconds on. I was just thinking, “This movie needs to spoonfeed me a little lot more.”

6:11 – I already hate everyone who was remotely associated with this over-saturated turd.

7:05 – This could not possibly get any more heavy-handed.

8:00 – To quote Louis CK: this sucks shit from the balls of Christ.

8:25 – It’s like whoever wrote this has never heard a human being speak in real life.

9:33 – A futuristic world where you can stop criminal impulses with radio waves – but leaving your mask with DNA evidence behind because it looks “badass” is just fine? Sure, that tracks.

10:06 – “Playing Jesus with people’s brains, and we were all their guinea pigs”… Whatever you’re trying to do, stop it. Stop it right now. It’s becoming painfully clear your grasp on the English language is tenuous at best.

11:55 – Almost impressive how nauseating this is.

13:50 – You can’t keep killing people and expect me to care. That’s what happens when you don’t develop your characters. None of it means anything.

14:37 – Why is everyone in this movie so determined to explain every single detail?

17:32 – Well this is about as sexy as having your catheter ripped out by a blood relative.

18:33 – Bricke straight-up murdered some dudes but the biggest crime so far is still the dialogue.

19:35 – Admittedly, I don’t know much about shooting a sex scene. I’m pretty sure the aim isn’t to make me laugh.

24:49 – I think if I was hugged more as a child and developed baseline self-esteem, I wouldn’t put myself in positions like this. Much to think about.

From there, it continues for two more hours. But as a consequence of being unable to sit through this ordeal sober, the commentary became increasingly indecipherable, and at times, potentially offensive to just… every possible demographic. In other words, we can’t publish a decent portion of my ensuing remarks.

Suffice it to say, Netflix’s latest pile of dogshit deserves the 0% rating.

The Last Days of American Crime is now available to stream on Netflix. Check it out. Or don’t. Believe it or not, you’ve absorbed the best parts of the film through this article already.

NOTE: Just looked into it further, the same dude who wrote this completed the screenplay for The King’s Man. 2020 just keeps kicking us in the dick.