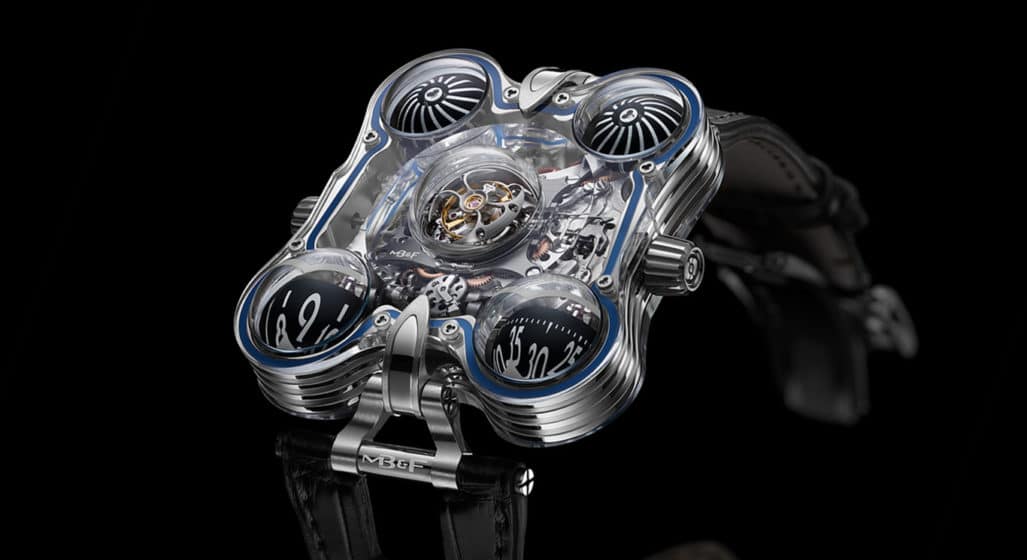 The main purpose of any watch couldn’t be more functional and banal: telling the time. But as any owner of complicated mechanical or high-concept and creative watches will tell you, beyond the functionality lies the art. Art which creates mechanical movement, with the most innovative watches powering multiple functions, within the relatively tiny confines of a wristwatch case.

The “art” of those creative watchmakers whose names live on today – your Abraham-Louis Breguets, John Arnolds and Louis Benjamin Audemars, for example – survive one way or another in the products of the companies bearing their names. They add new complications and models while always paying homage to the craftsmanship of the founder.

But there’s another group who see the watch case as a test. What are the boundaries of design, of functionality, of art in a wristwatch? What is possible? Some of the pieces below are prime examples of people testing those boundaries.

Part of MB&F’s Horological Machines collection, the always edgy brand describes this as its “most organic machine to date”.

If you think it looks like some futuristic spacecraft, there’s a reason for that. The HM6 is inspired by Capitaine Flam’s spaceship ‘Comet’ from a Japanese anime TV series of the 1970s and ’80s.

The HM6’s biomorphic case features a 360-degree sphere in each of its four corners, encased in transparent sapphire crystal domes. The two spheres at the front rotate vertically displaying hours and minutes, respectively, while at the back the twin spherical turbines regulate the automatic winding system to reduce stress and wear.

Atop and in the middle, under another transparent cupola, is a flying tourbillon behind which is a glimpsed view of the 475 components that make up a complex movement that required over three years of development.

More curved than others in this collection, the HM6 also takes its inspiration from the biomorphism art movement, which takes its cues from design elements based on the shapes of living organisms making it one of the most innovative and creative watches on the planet.

This Californian based watchmaker is unabashedly avant-garde in pursuing an imposing, industrial aesthetic in watchmaking. The unique Devon Tread 1 tells the time via a series of belts operating on multiple levels, resembling a piece of factory equipment as much as a watch. The ‘Time Belts’ concept displays hours, minutes and seconds in a way unlike the majority of the timepieces that have preceded it. That fact was recognised in 2010 when the Tread 1 was nominated in watchmaking’s most prestigious annual awards, Gran Prix d’Horlogerie de Genéve, in the category of Design and Concept Watch – the first American watch brand to be nominated.

The technology inside is advanced industrial, too. Functions are powered by an onboard microprocessor which gathers data from a crystal and a “proprietary optical recognition system” (nup, don’t fully comprehend it either), which continuously monitors and verifies the position of the time belts, ensuring accuracy within one half-second per day. Power is provided by a lithium-polymer rechargeable cell that runs for up to two weeks on a single charge. So cool.

The Cabestan Winch Tourbillon Vertical was inspired by a capstan, a mechanical device with a large drum on a vertical axis, hand-operated by a lever, the winch, causing a rope or chain to wrap around the drum.

Capstans are used for winding the movement and setting the time. A miniature chain and fusee transmit the energy. A vertical tourbillon regulates the movement. Drums display the time. And a small winch handle concealed in the deployant buckle activates the mechanisms. Crazy.

It’s all displayed under twin sapphire crystals that provide spectacular 180° views of the movement, in a limited series of 135 timepieces.