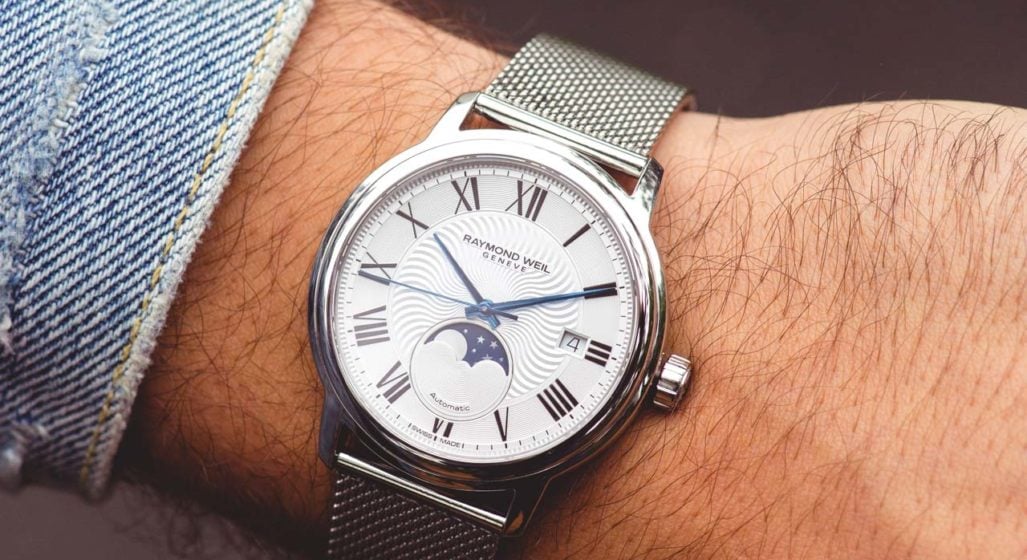 In the mid 90’s, Raymond Weil debuted their ‘Precision Movements’ campaign (now the brand’s motto) shot by American photographer Lois Greenfield and directed by John Booth, showcasing precise movements by ballet dancers, which went on to win the London International Advertising Award in 1995. The advertisement cemented the brand’s premium identity and captured the hearts of many, including my father, who acquired a Steel and Gold Tango from the collection that launched in the same year, to accompany my mother’s Raymond Weil she received after my sisters birth in 1988. It’s now come back around with the release of the Raymond Weil Maestro Moon Phase.

Although my parents might refute it, I believe Raymond Weil found it a challenge to transport such an enthusiastic perception of their brand from the nineties into the 21st Century, until 2006 when Elie Bernheim joined the family company, releasing the Freelancer the very next year.

It wasn’t until the release of the Raymond Weil Nabucco Cello Tourbillon in 2015, did I really begin to take notice, and even more so in 2017 when they launched the Freelancer 1212, sporting the brand’s first proprietary automatic movement, designed and developed in-house by Raymond Weil, and produced by Sellita.

What is admirable of the relatively young brand, founded by Mr Weil in 1976, is that it remains family owned and independent, and in the case of the Freelancer 1212, maintains an honest approach to pricing their products – as a Selitta made movement should be.

Since Elie succeeded his father as CEO in 2014, Raymond Weil has evolved its aesthetic with a noticeably more contemporary offering, with highlights including the Freelancer Diver and at Baselworld this year, the fresh-faced Maestro Moon Phase Ref. 2239M-ST-00659 which I’ve just spent a week enjoying.

The new Raymond Weil Maestro Moon Phase joins the Maestro collection which first debuted in 2010. The Maestro Moon Phase is powered by a smooth winding Selitta based Calibre RW4280 automatic movement with a 38-hour power reserve, presented in a delightful 39.5mm steel case and comes on a choice of leather or Milanese mesh bracelet both with a stainless steel folding clasp.

While it is undoubtedly a ‘dress watch’, on the mesh bracelet, I found the Maestro Moon Phase a particularly compelling proposition. There’s a modern simplicity to the case and an air of casual sportiness to the mesh, offering additional wearability while avoiding stereotypical dress watch formalities.

What has deterred me from dress watches in the past, is no longer an issue. On the mesh, the Maestro Moon Phase is a watch you could wear on any occasion, be it a black tie function or a summer dip on Sydney Harbour.

After a week on the wrist, my only qualm with the Maestro Moon Phase was with the extra mesh tucked up under the strap (a problem I fear 95% of wearers would face), and my wrist being just between sizes on the bracelet, a problem alleviated by the leather, which can be fine-tuned by locking the leather into place wherever the wearer desires.

With choices of Silver, Blue or Grey dials I have to admit my last choice would be Silver, however, I warmed to it quickly and came to love the contrast with the blue hands and moon phase disc. The Maestro Moon Phase never struggles to attract your eye or the eye of an admirer, often impressed to discover it’s a Raymond Weil.

At $2100 on leather or $2350 on the mesh bracelet, the Raymond Weil Maestro Moon Phase appeals beyond its handsome aesthetic. As a sports watch fan and someone who tends to avoid skeletonised movements, the Maestro Moon Phase is undoubtedly the pick of the collection and suggests we’ve got a lot more to look forward to from the family-owned watchmaker.

Check out the Raymond Weil Maestro Moon Phase here. You can also add in one of their iconic Parsifal collection into the mix.