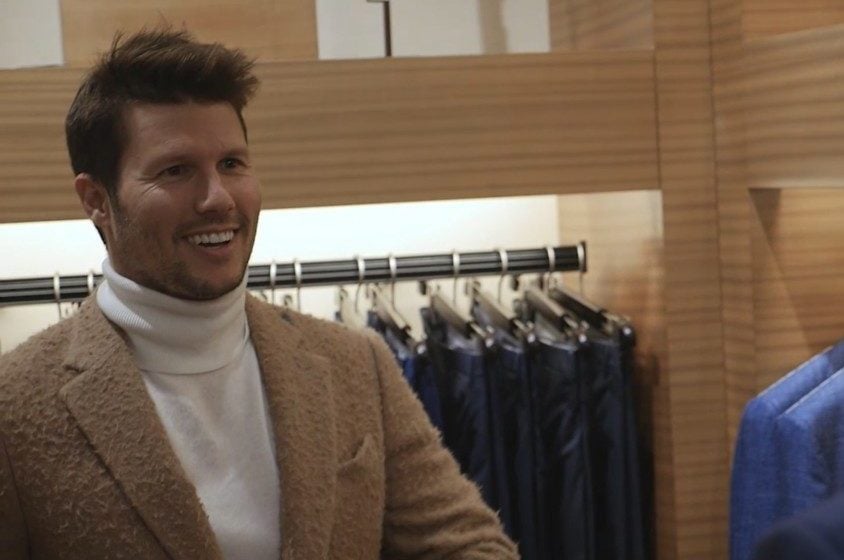 Jason Dundas has been a media mogul since his 20s. In 2003, he won a contest to host his first TV show on MTV and since then he’s hosted over 600 hours of live primetime television across America and Australia. With stints on The X-Factor Australia and Entertainment Tonight, TV work in over 100 countries for Channel 9’s Getaway, and the continued success of his own company, Dundas Media, he truly embodies the spirit of hustle.

We sat down with him at the Ermenegildo Zegna boutique in Melbourne to chat about his epic journey of entrepreneurship and stardom, as well as the defining moments that came with it.

At this stage in your career, what would you define yourself as?

I’m a TV host and a creative director of a media business called Dundas Media. What we are doing with Dundas Media is looking at this digital revolution, bridging the gap between conventional television and previous styles of marketing. We’re making unscripted TV at 60 to 90 seconds to target various verticals on Instagram, YouTube and Facebook.

Do you feel there’s a disconnect between those levels of conventional TV and social media?

I feel like right now is a super interesting time. When I was twenty, I bought an Mac with iMovie and studied Graphic Design out at University of Western Sydney. Back then the idea of a graphic designer was this foreign thing and there wasn’t any social media platforms nor the idea of a content creator. So I guess I was at the precipice of that era, constantly selling and making shows with the only platform back then being TV.

I sold a show when I was 21 to MTV which looks like a show that would suit YouTube nowadays. My mind back then told me that shows needed to be quicker and more colourful, so the introduciton of the digital space has allowed me to really stretch my creativity. I can use everything I’ve learnt as a host to implement aspects into this new media.

What was the defining moment within that hosting career that orientated you to where you are today?

I came from Penrith and never studied anything, I won a contest from a video that my mates and I made on my dad’s camera. It all just sort of snowballed and I would just sweat, get petrified and not really remember anyone’s name. So I jumped right in the deep end. After MTV I moved onto Getaway and then at 26 years old I stepped back and looked at the American market – I wanted to host the biggest shows in the world.

I made a choice to pack my bags and head to the US with no prospect of any career opportunities. It took about two years to get a bite, but what stands out for me was how I used to watch a show called TRL from Times Square in my bedroom at 16, then fast forward to 29 I co-hosted 400 lives episodes of MTV’s breakfast TV show from the same studio.

How has America influenced your growth?

I was lucky enough to get a job on Getaway at around 24 and I travelled to 100 countries over 8 years making TV. So I got to experience a lot of different cultures and New York was the one that really struck a chord with me. I moved there for 4 years, but I had to find a place which geographically allowed me to work anywhere. Los Angeles is the perfect destination.

For me, I don’t really look at myself as living in a particular country. I look at the world as this big global thing without border and I live in LA because I can fly overnight to anywhere. The creative stimulation is also cool, there’s this great balance where if you can be a hippy and do nothing but you can also be working a 100 hours as well. It basically has the hustle of New York but the chill of Bondi.

I reached a point at the age of 33 when I realised that I don’t have to be the guy in front of the camera. You can go on X-Factor and host it for an hour live and then you can take responsibility for yourself to work 12 hours in an office. I was a bit afraid to really have that “day job”, because the idea in TV is about flexibility and balance.

At the core I’m a workaholic and all I want to do is work. Because of that, I now gain from exactly what I put in. Hosting is a subjective artform, your life is hanging on the thread of somebody else’s opinion. But with a media company, you can constantly be creating and get exactly back what you put in.

How did the start all the way back in Penrith end up with you running a hugely successful media company?

I think growing up in Penrith made me realise that everything you want in life, you have to work to get it. So from day one I’ve worked harder than anyone and I know if I work the hardest, the best chance of success comes with it. I was never handed anything I literally made a tape at 4am to win a job which has allowed me to travel the world and live all over the planet. I made this with my own hands.

Presented in Partnership with Ermenegildo Zegna