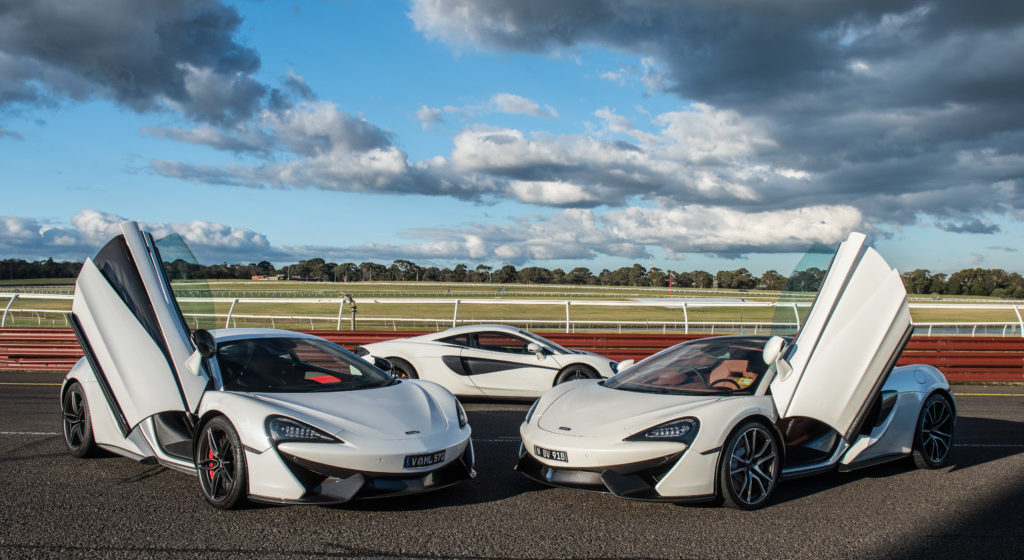 Sandown Raceway. One of both Australia and the southern hemisphere’s great racing tracks, and a personal favourite of mine. Nestled in the middle of suburban Melbourne, the 3.1-kilometre facility is known for it’s drag strip back straight and tricky “Dandenong Rd” section through turns 6 to 12, and is a course best driven in either a race car or something race-bred. While I’d driven Sandown twice before, I’d yet to have a day in something quick enough to throw around and actually scare me, so the yearning to have a crack and push the limits around the famous course was not to be underestimated.

Enter McLaren Asia Pacific–fresh off the Australian launch of their range-topping 720S–to invite us down for a day of testing their glorious Sports Series range. But this wasn’t just your average media drive day, where usually you spend the event enjoying a mix of city and highway driving, trying your best not to lose your license while breaking things up with lunch somewhere in between. This was customer-focused and featured a mix of city, highway and track action, all led by McLaren APAC’s regional sales manager Anoop Arjun and drive day expert Luke O’Neill.

The McLaren Sports Series features three cars in the range; the 540C, 570S, and 570GT. While I didn’t manage to get myself behind the wheel of the grand tourer of the three–the 570GT–I spent most of the afternoon in the cockpit of the more track friendly big brother; the 570S, which features among other things increased sharpness of the chassis and drivetrain, less trunk space, and a carbon ceramic brake setup.

To kick things off, we started with a quick bite to eat and briefing on the range from Anoop before Luke ran us through what we had in front of us for the afternoon. I was assigned the baby 540C to navigate my way to the track from the hotel in Glen Waverley in convoy with 5 other cars, Luke leading the way on the walkie talkie.

Getting in
What immediately strikes you jumping into a McLaren is the weight (or lack thereof) and movement of the dihedral doors, effortlessly gliding through their plane of movement after you click to engage them open. While setting the British marque apart visually, they also serve the engine in channelling airflow through the floating tendons sitting near the doorhandles.

My 540C was fully spec’d with alcantara throughout the interior, something I’m a huge fan of, and after getting into the cockpit you quickly realise everything is kept relatively simple (in supercar terms) from the touch display panel in the centre of the car to the dials behind the wheel. While the refinement of the range can sometimes be called into question, especially in comparison to competitors like the 911 Turbo, there’s no doubt the less-complicated approach (there are no dials whatsoever on the steering wheel) is something that works inside the Sports Series range, focusing on the performance of the car and the drive itself while still maintaining supercar sophistication.

Getting track-bound
The 540C is the baby of the range, but it still features the same basic underpinnings as its older twin brothers including full carbon fibre tub, twin-turbo V8 and heavenly seven-speed dual-clutch automatic gearbox. The drive from the hotel to Sandown takes about 20 minutes one-way; just enough time to get a feel for city driving in the Sports Series range.

While neither the 540C nor 570S deliver the same guttural, ear-splitting soundtrack generated by the Ferrari 488 or the Lamborghini Huracan, there’s an element of surgical precision that befits the refinement that McLaren is renowned for, mixing that high-tech flat-crank V8 note with a faint hint of turbo whistle as you stab the throttle coming onto Dandenong Road.

That refinement is translated into the way the 540C drives too; when left completely to its own devices, the engine and gearbox work intuitively together at low speed to deliver the smoothest of transition of shifts to makes it an effortless car to pedal around the ‘burbs in all traffic conditions.

Hitting the track
After arriving on track, we were again briefed by Luke in the pits before being re-assigned cars, meaning it was time to jump into the 570S. Much to my delight, my new whip was again fully spec’d with alcantara interior (which I later found out was thanks to Ben Stack from McLaren Melbourne, cheers mate) which I can’t speak highly enough of. Taking a second to absorb my new surroundings inside the cockpit, I quickly realised it really wasn’t the time to be admiring the car’s refinement, as I had Luke on the walkie talkie telling me to exit the pits and push down to turn 1 as we warmed the tyres and brakes up on the out lap.

Track time meant putting the Sports Series range through it paces, and this can’t be done without using the Active Dynamics switchgear located at the base of the centre console. While it’s not as simple to use as basic sport buttons in some of the range’s rivals–you need to activate the switches, then rotate through three toggles – Normal, Sport and Track – on separate dials for the engine and handling–it’s clear to see this is exactly where the brand’s F1 breeding is most notable.

It took me a lap or two to really get a feel for how the panel works, but after a little guidance over the walkie talkie it really is a breeze to use. Seeing the display adjust behind the steering wheel into “F1 mode” after shifting the car’s Active Dynamics to Track was a real thrill, with the open wheeler-style rev counter taking over the screen, now centred by gear display with speed only a minor feature below it.

After getting things warmed up and shifting the Active Dynamics panel through all three settings, you really get a feel for the “Jekyll and Hyde” personality of the 570S. Amazingly comfortable at low speed as we convoy around the opening few laps, the car just opens up as we’re given more license to push it, angrily shoving my head back into the seat as I exit turn 4 full throttle up the back straight. I’m not a race-trained driver, and the 570S just begs for more speed as it swallows up the Dandenong Road section betweens turns 6 and 12, asking everything of my ability while rarely feeling like its about to slip or understeer despite my lack of talent.

As its a customer drive day, we managed to get in roughly 10-12 laps which despite not feeling like enough, leaves me exhilarated and with an ear-to-ear smile adorned across my face, especially after hitting speeds in excess of 230km/h down both straights.

Getting home
Just like the baby 540C of the series, the 570S is glorious on the road. It’s seemless-shifting seven-speed twin-clutch gearbox isn’t just good–it’s brilliant–and there’s really no need to take the transmission out of auto on the road. Even plodding along at speeds as low as 40km/h approaching a school zone, it’ll drop three gears in a matter of tenths (with throttle blips for effect) far quicker than I could have pulled the paddles.

Final thoughts
The 570S’ 419kw twin-turbo V8 is at home on the track, and it’s a car that’ll readily pull 0-100km/h in 3.2 seconds (in launch mode), but it really is just at home on the road. Something McLaren has struggled with, particularly here in Australia, is shaking the “unattainable supercar” tag, borne largely out of the success of their top-end hypercars like the F1 of the mid-90’s and the P1 of today. What the Sports Series does is break down this stigma of carbon fibre-plated pure track cars, offering a “best of both worlds” setup and a seriously affordable price.

We’d like to sincerely thank Anoop Arjun and the team at McLaren Melbourne for the opportunity to get behind the wheel of the full Sports Series. Head to their site here to find out more about the range.