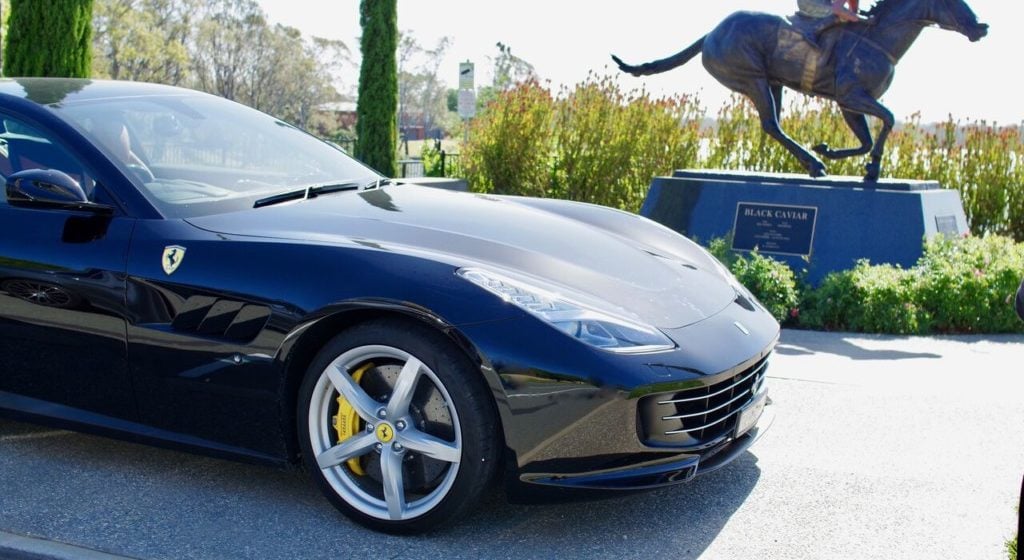 It is not every day you get invited to ride a powerful thoroughbred through the Victorian countryside. I’ve ridden many horses over the years but none quite like the Ferrari GTC4Lusso.

Being invited to drive the GTC4Lusso was a real honour. The next generation of Ferrari’s FF, the Grand Tourismo Competizione 4-seater Lusso is the type of car dreams are made of. Not only do you get that Ferrari beast 690 BHP, you get the comfort of a 4-seater to throw the kids or your mates in the back.

We headed down to Zagame’s on Swan St to meet Ferrari Australasia CEO Herb Appleroth and the posse to give the “’Rari” a whirl and be treated to some serious thoroughbred prestige. The first leg of the drive was to Swettenham Stud Farm in Nagambie. Swettenham Stud is a prolific stud farm that is home to 2010 Melbourne Cup winner Americain. This incredible animal is as beautiful at 13 as he was when he won the cup as a 6 year old.

From Swettenham Stud we took these thoroughbreds out to see what they were really made of. We drove through some proper Australian countryside through hills and sweeping bends to hairpins and debris dodging. The diversity of road allowed for the car to really flex its muscles. The torque of the monstrous V12 on its way out of turns was exhilarating. The feel of the AWD correcting any loss of traction was a handling delight. Looking in the back to see a passenger was like pinching yourself when you think you are dreaming. How could a car this fast and this powerful still be able to take passengers? it just doesn’t seem right.

After a long drive giving the car everything we could, we stopped for an amazing lunch at the picturesque Mitchleton Wines Vineyard. Starting with a delicious entrée of pumpkin doughnuts served on chevre mousse with pickled chilli and finishing with some locally sourced Kilmore lamb backstrap cooked to perfection.

If lunch was not enough Cat from Rodwell Communications had organised a Spring Racing fashion show from the team at Harrold’s. From the polish and class of Derby Day’s black and white to the fun and frolick of Melbourne Cup Day there were some amazing examples of what to kit up with over the next week.

After lunch my co-pilot Jane Rocca was set to interview well-known Australian model and friend of Ferrari Jarrod Scott allowing me a few minutes alone with the car. I headed into Nagambie to snap a shot of the black GTC4Lusso in front of one of the most elite thoroughbreds of all time… the unbeaten Black Caviar. What an iconic duo!