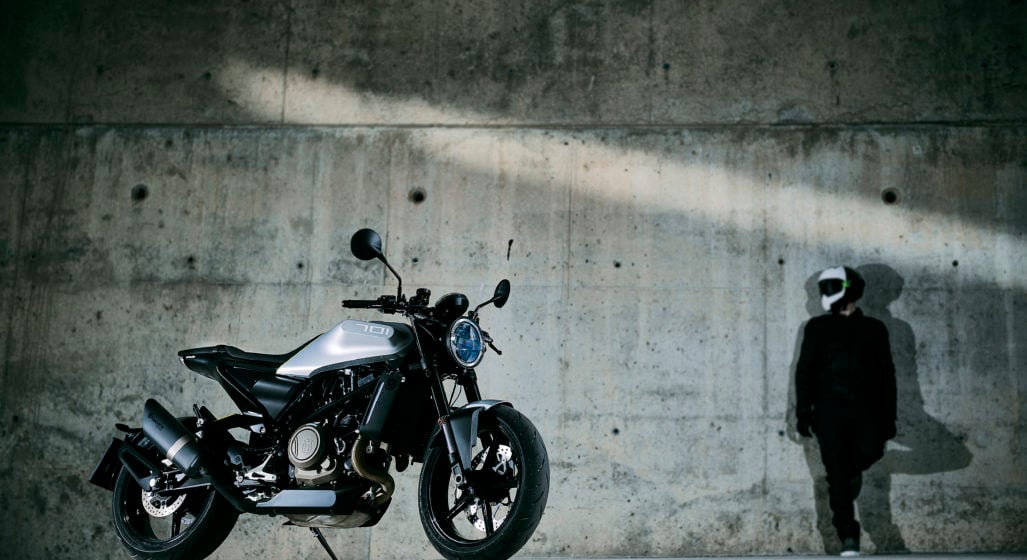 Barcelona. The Catalan capital known for its food, culture and revelry amongst a sea of motorbike culture so synonymous with Spanish heritage. Is there a better place to test ride the all-new Husqvarna Vitpilen 701, screaming through the city’s surrounding hills? To find the answer, let’s take a closer look at the bike and everything it has to offer.

The Swedish Austrian
The Vitpilen (Swedish for “white arrow”) 701 first debuted as a concept at Italy’s EICMA show back in late 2015, a year after the Vitpilen and Svartpilen (“black arrow”) 401’s first broke cover at the same show, and some two years after KTM purchased Husky from then owners BMW Motorrad, in late 2013.

Built and produced at Husqvarna/KTM’s headquarters in Mattighofen, Austria, the 701 is set to be the flagship bike of the Husky road range, sitting above both aforementioned 401’s. Marketed under the tagline “Simple. Progressive.” the Vitpilen sets no intention of being categorised into the usual ‘Roadster’ or ‘Retro’ labels the bike industry would often place it. Instead, Husky has set about building a bike for all riders, pushing the boundaries of cultural convention and establishing a product that caters for more than one biking stereotype.

“This is made for any kind of rider who wants an authentic riding experience,” says Paola Carrubba, Husqvarna’s global Media and PR Manager. “The Vitpilen 701 opens up a new space within motorcycle culture.”

Design & style
The first thing about this bike that hits you is its design. The 12-litre tank is a piece of modern art, offsetting the traditional retro scene usuals with an industrially designed centrepiece that defines the overall package and makes the Vitpilen defy categorisation. The minimalist ethos is courtesy of Kiska Design, who has been responsible for KTM’s fleet since the 1990’s and has absolutely nailed the “Simple. Progressive.” brief.

The extruded overall ‘701’ badging on an angular yet clean tank is the DNA of the bike, and sets its vision too. The Vitpilen’s headlight, a distinctive LED daytime run light that besets its traditional round frame exudes the design’s “back to the future” feel, making it eye-catching not only in design but also in traffic where you might functionally need it most.

The two other features that struck a chord with us (besides the tank of course) are the clean tail end, chopped back with a bespoke exhaust and about as minimalist as road bikes get, and the vertical fluoro yellow line through the Vitpilen’s midsection. Both work hand in hand. Much design focus is often placed on the front end and tank of road bikes, so it’s a breath of fresh air to see an option that aims to be as clean through the tail end as it is throughout the rest of the bike.

The distinctive fluoro yellow line helps to create a subtle but eye-catching illusion that helps separate the tank from the seat and tail, only furthering the model’s simple yet beautiful styling cues. There’s no doubting it’s set to be one of the better looking bikes on the road, something we can safely say from all the attention we received while in the saddle in Spain.

As for rider positioning, the Vitpilen runs on the taller side without being overbearing. The 830mm seat height feels borne from Husky’s dirt bike heritage, while the relatively aggressive ride position makes for a package that loves to get deep into corners, making it far from an “A to B” commuter.

Engine & running gear
Let’s be clear on this, the Vitpilen is insanely light and deceptively simple, but not all that meets the eye (and initial feel) is true with this bike.

The engine block is identical to the 43kg single-cylinder engine found in KTM’s 690 Duke and Husky’s own Supermoto 701, but thanks to revised fuelling, a different (and bespoke) exhaust and air-box it produces a few extra horsepower compared with its Duke cousin. Husky says the engine is good for a claimed 75hp and 72Nm of torque, which is unremarkable by today’s standards, but with a dry weight of just 157kg the Vitpilen makes for a juicy power-to-weight ratio package and an overall exhilarating ride.

Husky has improved the gearbox from the Duke to give a more positive change between second and third gears, while adding ‘Easy-shift,’ the Swedish marque’s name for their up-and-down quick-shifter. Other highlights include a lengthy array of high-spec gear – a slipper clutch, switchable traction control and ABS, fully adjustable 43mm front forks from WP suspension (also owned by KTM and borrowed from the Duke), full LED lighting and a comprehensive trip computer.

Lastly, what’s stopping the Vitpilen is none other than a set of class-leading Brembo brakes again borrowed from the Duke. The front features a 320mm disc with four-piston caliper while the rear is brought to a halt via a 240mm disc with single piston caliper.

The ride
Always our favourite part, and what a delivery it proved to be. Cruising out of the city of Barcelona takes about 10-15 minutes on a set of freeways, which the Vitpilen comfortably cruises on, happy to sit 10-20km/h above the local limit (which we won’t list) if need be while still remaining responsive on both throttle and steering.

As the freeways end and the villages start getting smaller, the hills quickly appear and its time to see what the bike can really do. Husky claim the Vitpilen isn’t a sporty model, but it still does a brilliant impression of one. The rider position feels natural and not too upright, and the adjustable WP springs give it a glorious ability to slice in and out of chicanes with laser precision, it’s highly-tuned single powering us through the exit of every bend with glee.

While the seat may be slightly on the firm side, making us happy to have a break and a coffee at the midway point somewhere between Barcelona’s city centre and the Circuit de Catalunya, it’s hard to fault the Vitpilen’s “get out of town” credentials. It’s truly a brilliant machine that caught us smiling and laughing to ourselves more times than we could count. Having mentioned that, there probably isn’t a better city in the world to host a global media launch and test ride than Barcelona, the Catalan setting only enhancing the experience. The city’s easy to navigate layout, immediate hillside geography and staunch bike-loving culture combining to give us maximum exposure to not only Husky’s product but our own love and passion of riding bikes.

Final thoughts
Set for arrival in dealerships in early June, expect a price tag around the $17,500 mark (ride away). While that might challenge the “simple” tag, the overall beauty of the Vitpilen underneath its avant-garde design is how easy it is to ride and how much damn fun it is.

Whether you’re a bike person or not, the tech lying beneath the surface packaged into such a unique and attractive bike helps the Husqvarna Vitpilen 701 defy categorisation, giving it a more universal appeal and making the Husky one of the most exciting bike releases of 2018.

The rest
Price: Unconfirmed, but expect it to be in the $17,500 range (on the road)
Colours: Silver/black
Warranty: Two-year/unlimited kilometres