Could You Handle A Tackle In The NFL? 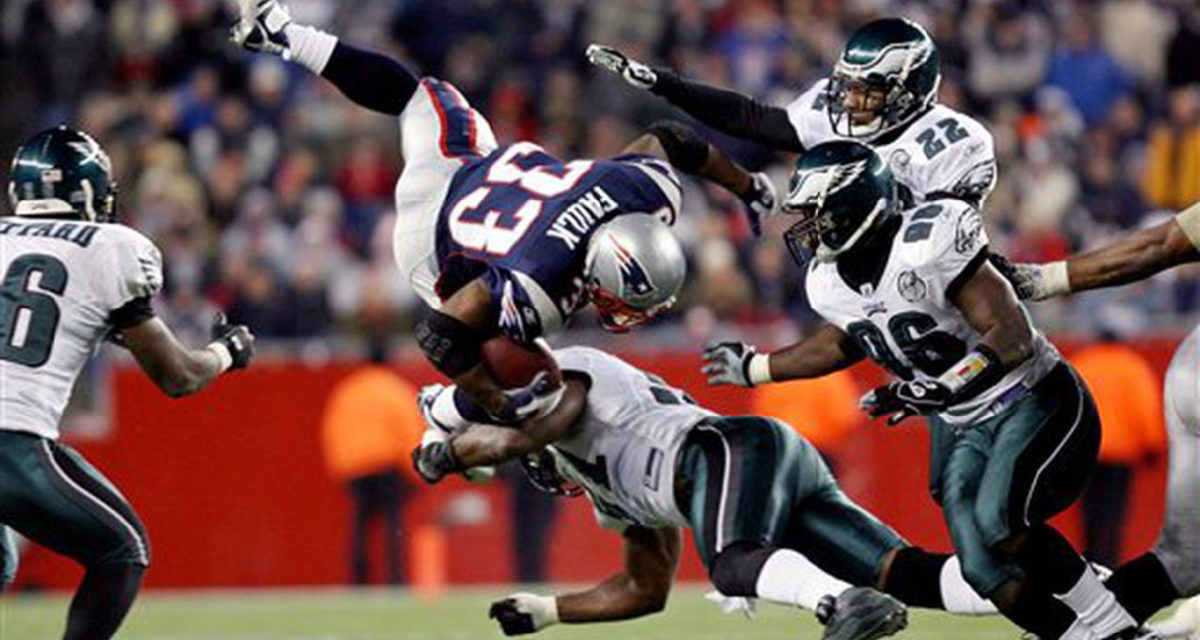 At 6’6″ (1.98 metres) and 376 lbs (171 kilos), Aaron Gibson was the NFL’s largest defender. In a sport full of the biggest athletes and even bigger hits, he stands alone at the top. So what kind of impact would an NFL tackle from someone like Mr Gibson have on the ordinary punter?

Football is not an inherently violent sport. Yet there’s an ongoing discussion surrounding how badly the sport seems to damage the human body; and whether the NFL does enough to mitigate the tackle risk for its players. As an organisation, it was notorious for misdiagnosing and underselling the impacts of concussions for years until medical science plainly highlighted the debilitating effects on the athlete’s lives after an often-early retirement.

In the wake of several lawsuits, the NFL has taken the precautions of devaluing kickoff returns and fining players who went headhunting. The idea of a 17th game is still a contentious point during CBA negotiations and reports of players overusing painkillers just to get through the season have since become public knowledge. For reference, more than 100 concussions are still reported every season.

Keep in mind, these guys are not you. We are talking about the physicality of the most impressive athletes on the planet, playing a viscerally exciting game in front of millions. This is a league where more than 500 players weighed 300-plus pounds at the 2006 training camps. You’d be demolished, plain and simple. It’s just a question of how badly.

According to Timothy Gay, a physics professor at the University of Nebraska and author of The Physics of Football, the mass of a defensive back (DB) combined with his speed – which is, on average, 4.56 seconds for the 40-yard dash – can produce an astounding 1,600 pounds (725kg) of tackling force.

The standard metric of researchers for the shock absorbency is known as G-Max. It’s measured with an object called a Clegg Gmax, which approximates that of a human head and neck (about 130 square centimetres and 9kg), dropped from a height of 60cm.

A low G-Max is a good thing. It means the field has absorbed more energy than the player. Using the instrument, NFL fields must fall under a 100 score everywhere on the field. Most fields range in the 80s, with the occasional test in the 70s or 90s. Natural-grass fields can soften into the 60s following rain. Synthetic surfaces have G-Max ratings of up to 120, but the one you want to really stay away from is frozen grass. You hit the deck there and Aaron Gibson is honestly the last of your worries.

“Oh, but the padding,” I hear you say. “Suuurely I would be alright with a helmet and all that padding.”

You’d be sadly mistaken. In a Virginia Tech study, researchers were able to gather data from the Head Impact Telemetry System, which employs sensors and wireless transmitters in helmets.

“We see 100-g impacts all the time and several over 150 gs,” reveals Stefan Duma, Director of the University’s Center for Injury Biomechanics.

While it’s true that modern shoulder-pads are molded into designs with more right angles to deflect impacts, according to Tony Egues, head equipment manager for the Miami Dolphins, the plastic itself hasn’t really changed at all in last 25 years.

As you’re being tackled, the foam padding beneath the plastic components of your equipment is supposed to compress, absorb energy, and reduce the speed of impact. These pads – as well as the solid shell and face mask of their helmets – redistribute the energy of a collision and are the only thing between you and 150 gs sending you straight into the ground.

Granted, this is definitely an improvement on what it used to be, although it doesn’t completely account for the fact that these athletes keep getting larger and the hits keep getting harder. A tackle would show you that the players in the current NFL are bigger, faster, and stronger than ever before.

A helmet hit courtesy of 1930s Hall of Famer Morris “Red” Badgro would leave you with around 4.9 tons of force — twice the impact of a 30 mph car crash while wearing a seat belt. Crazy, right? Compare that to a helmet hit from former Ravens defensive tackle Haloti Ngata, who would inflict 8.4 tons of force upon you. A car crash without a seat belt uses 12 tons of force.

You’ll be happy to know that you’d (probably) survive this encounter. John Melvin, an injury biomechanics researcher for General Motors and NASCAR, explains that the body can handle twice that amount, provided that the impact is well-distributed. If the hit is more targetted, however, the impact is going to leave you feeling g-forces five times bigger than a jet pilot pulling tight turns.

That being said, there are other concerns for your health than merely just your survival. Take for example the dreaded knee injury. According to the Pittsburgh Tribune-Review, over 12,00 knee injuries were reported by the NFL between 2000 and 2003, accounting for 1/6 injuries – by far the highest percentage in the entire league. The knee’s anterior cruciate ligament can technically withstand nearly 500 pounds (226.8kg) of pressure, but it is easily torn from hits to the side as well as evasive maneuvers.

So to answer the million-dollar question: “Could you handle a tackle in the NFL?” The short answer, for your own damn sake, is no.