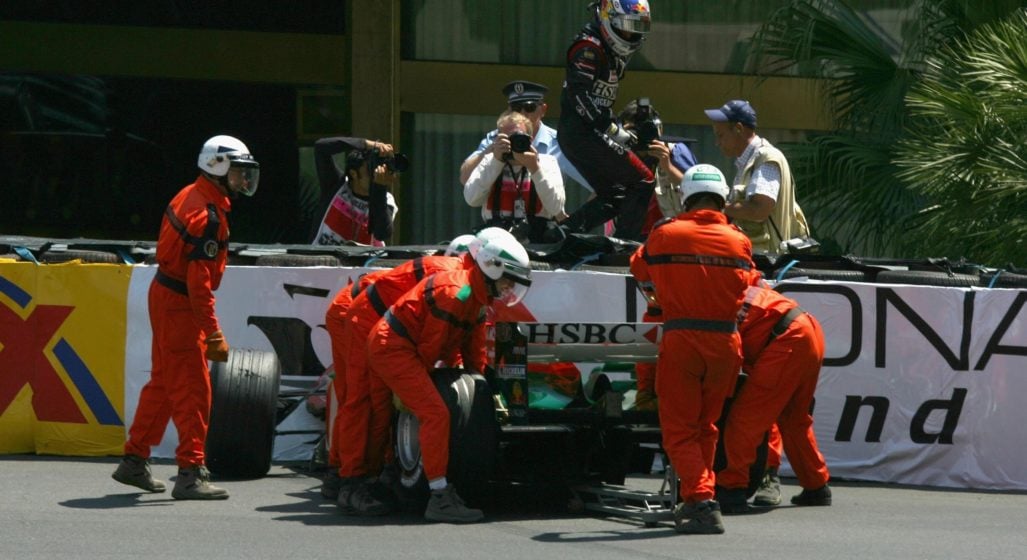 This article by Doug DeMuro originally appeared on Jalopnik and has been edited.

I can assure you, dearest readers, that my headline isn’t writing checks that this column can’t cash. On the contrary, the actual story of the Missing Formula 1 Diamond (dun dun dunnn…) is even more ridiculous than the headline makes it seem. And today, you’ll be treated to a full explanation of the entire thing from me, a bona fide expert on the topic, as I recently read several brief news articles about it.

To understand the full story behind the Missing Formula 1 Diamond, you’ll have to take yourself back to 2004, which is when the entire event took place. It’s also the year that Ocean’s Twelve came out in theatres. You may also remember Ocean’s Twelve, since it was the finest of the Ocean’s movies, as measured on the age-old scale of total number of in-movie Range Rover appearances. Other films that score highly on this scale include documentaries about the Queen, and of course that YouTube video of the guy who ran over all those motorcyclists a couple of years ago in Manhattan.

Anyway: I bring this up because diamonds don’t just find their own way into Formula 1 car races. Instead, diamonds are added to Formula 1 races as part of, for instance, a movie promotion. In this case, the diamond we’re discussing showed up as part of a promotion for Ocean’s Twelve, which is our first Point of Curiosity, considering that movie revolved around the theft of a Faberge egg.

But no matter: that’s actually the most logical thing about today’s Missing Formula 1 Diamond story. Next, we move on to the least logical thing: the placement of the diamond. You see, in order to fully advertise this movie, promoters apparently decided that they needed to make a huge splash, perhaps feeling that the first movie’s $350 million box office profit wasn’t quite enough.

So what they did was, they went to the most popular race of the Formula 1 calendar — the Monaco Grand Prix — and they installed the diamond on the nose of a race car. But this wasn’t just any race car: they put this diamond on the front of an actual race car that would be racing in the actual Formula 1 race. And it wasn’t just one diamond: they did this with two different diamonds on two different race cars, both of which were taking part in the Grand Prix.

Most importantly, this wasn’t just some cheap little diamond your cousin might get from her forklift driver boyfriend after he proposes to her at Red Lobster. The diamonds installed on the front of these race cars were reportedly worth $400,000 each — on loan from Israeli gem firm Steinmetz, who (surprise, surprise!) couldn’t find anyone to insure them, presumably because every possible insurance agent who heard the idea quickly collapsed from a laughing-induced heart attack.

So just to be clear, here’s the situation: we have two Formula 1 race cars driving around the most challenging track in the sport, reaching triple-digit speeds, racing neck-and-neck alongside other vehicles, with $400,000 diamonds strapped to their nose cone.

OK, so we know that the inevitable happened. But here’s the crazy part: it happened on the first lap. Yes, that’s right: Jaguar driver Christian Klien crashed his diamond-encrusted F1 car at the Loews Corner before he ever finished one trip around the circuit, thus creating a frenzy in the area around the crash as excited spectators went looking for the diamond. And here’s the really crazy part: track safety regulations prohibited Team Jaguar from searching for the diamond until after the race ended two hours later.

To clarify what everyone was thinking during those two hours, here’s an actual quote from Jaguar team spokesman Nav Sidhu about the crash: “At that point, I probably should’ve been worried about the car or the driver. But, I must admit, my immediate thought was for the diamond.”

Of course, by the time the Jaguar folks arrived on the scene, the diamond was long gone. No one knows what happened to it, though I’m thinking about doing a story on the aftermath. It would have no new information, of course, but there would be a clickbaity headline; something along the lines of: JEWEL THIEF MAKES OFF WITH $400,000 DIAMOND AFTER RACE CAR CRASH!!! There would also be cool pictures. And you would click on it.