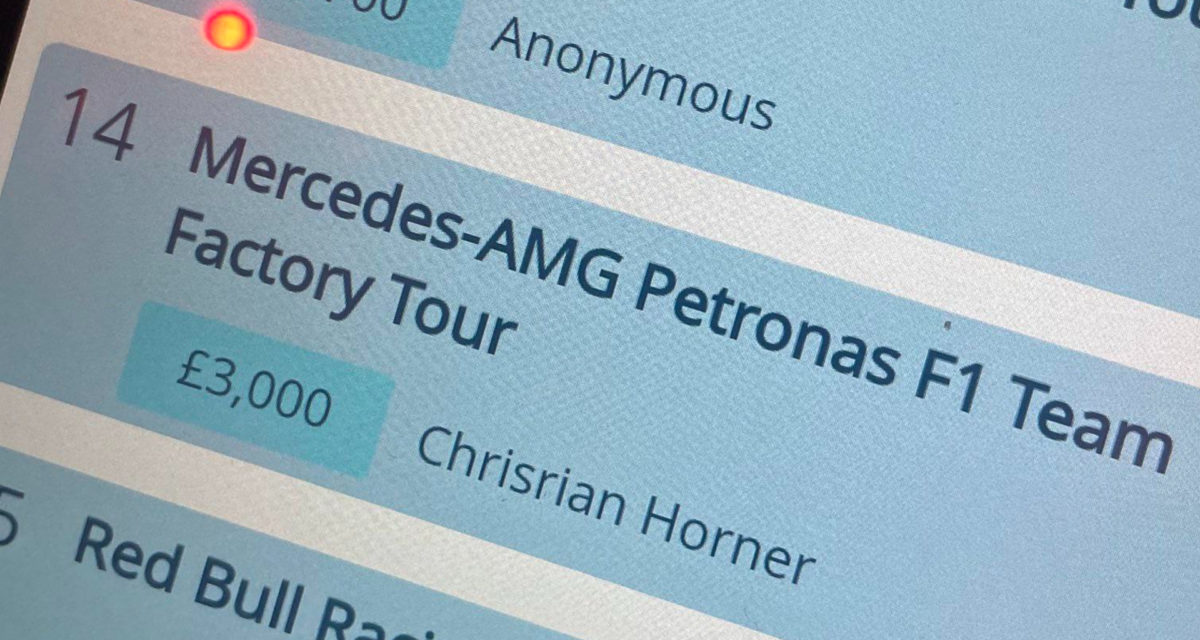 When the chips are down, Red Bull Racing and Mercedes AMG Petronas F1 will do whatever it takes to finish in P1. Just ask anyone who was paying the slightest attention last year during the 2021 Formula 1 season. And as we’re now learning, the sheer scope of this by-any-means mentality is apparently a little wider than we initially assumed. Red Bull Team Principal Christian Horner, for example, has recently gained access to his arch rival’s facilities using some cheeky backdoor tactics: bidding on a tour of the Mercedes factory at a charity event.

The dollars were rolling in this past weekend at the Autosport Award Charity Auction with all proceeds being directed to the Grand Prix Trust. For context, the organisation has provided help and advice to Formula 1’s trackside and factory-based team personnel for three decades, helping them “put their lives back on track when things go wrong.”

Stepping up to do their part, Mercedes generously donated a tour of its Brackley site. Before long, the opportunity was noticed by a certain team principal, who pounced on Lot #14 for £4,000 under the name ‘Chrisrian Horner.’ Yes… ‘Chrisrian.’ Whether this was the digital version of throwing on a fake moustache or simply a typo is unclear.

RELATED: Formula 1 Champion Max Verstappen Will Change His Race Number To No.1

Speaking to RacingNews365.com, Christian Horner joked about wanting to take “about 20” people with him for the Mercedes F1 factory tour.

“Adrian Newey [Chief Technical Officer], myself, Pierre Waché [Technical Director], and probably Paul Field, our Director of Production,” quips Horner, who will probably receive the most comprehensive walkthrough of the lobby ever known to man.

“It’ll be interesting to go and see how they’re spending their budget cap.”

As noted by F1i.com, interestingly enough, while Red Bull Racing also donated a factory tour to the Grand Prix Trust, Mercedes’ Toto Wolff didn’t return the favour in kind by whipping out his Amex. Clearly, he’s confident about Sir Lewis Hamilton and George Russell’s odds at securing podiums in the Silver Arrows this season without any espionage. Or perhaps he came up with a better alias than ‘Toro Wulff.’

This wouldn’t exactly be the first time Christian Horner toured another Formula 1 team’s factory, either. Back in 2008, he visited the McLaren headquarters with Red Bull Racing CTO Adrian Newey and David Coulthard himself, both of whom had stints at McLaren and RBR.

“DC invited us and [then McLaren team boss] Martin Whitmarsh was there,” recounts Christian Horner.

“I went with Adrian… he obviously knew his way around and everywhere he wanted to go we weren’t allowed.”

“I think we saw we saw the marketing and electronics departments and had a very nice lunch. And that was about it!”

Pre-season track sessions kick off later this month on February 23rd in Spain, before the 2022 Formula 1 season officially commences on March 18th in Bahrain – lights go out for the first race event on March 20th.