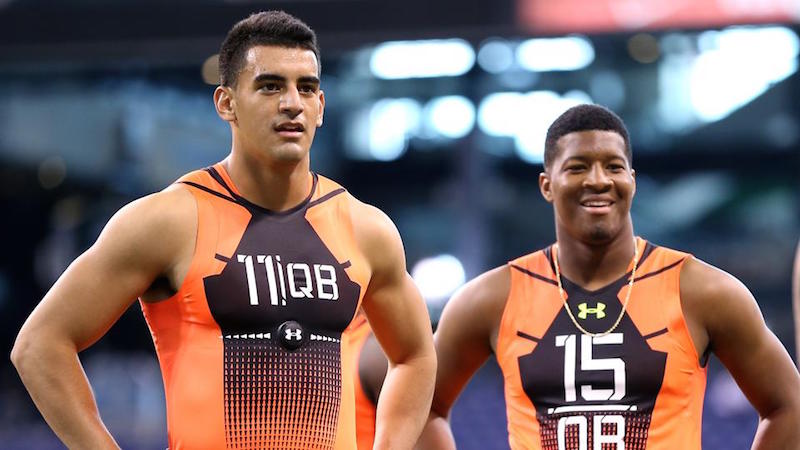 The NFL careers of former and current Heisman Trophy winners Jameis Winston and Marcus Mariota kicked off at Raymond James Stadium in Tampa this morning, with Mariota’s Tennessee Titans running out 42-14 winners over Winston’s Tampa Bay Buccaneers. The two quarterbacks, who were drafted with the number 1 and 2 picks respectively at the 2015 NFL draft, faced off giving us a glimpse into the futures of two long-struggling franchises both desperately in need of a franchise play-caller.

Mariota, the reigning Heisman Trophy winner, looked far more at home in the NFL despite coming from a spread Oregon offense, as opposed to Winston’s NFL-style system at Florida State. He hit fourth-year wideout Kendall Wright with a play-action for a 52 -yard touchdown on his first drive in the pro’s and finished the day registering a 158.3 passer rating going 13-of-16 for 209 yds with 4 touchdowns. Mariota also became only the second rookie in NFL history to throw 4 touchdown passes in a season opener, and if that isn’t impressive enough, all 4 were in the first half.

This was in stark contrast to Winston, who had his first pass in the pro’s intercepted by Titans corner Coty Sensabaugh who took it to the house for a 26-yard pick-six. Winston isn’t without high-profile company in the group of players to have thrown a pick-six with their first pass in the league though, with future NFL Hall of Famer Brett Favre doing the same during his short and often forgotten stint with the Atlanta Falcons back in 1991. Winston continued to struggle finding solid rhythm with the Bucs o-line and clearly missed his number one target, Bucs wide receiver Mike Evans who didn’t play after injuring his hamstring in the offseason. Subsequently he looked to utilise Bucs tight end Austin Seferian-Jenkins, who hauled in both of Winston’s touchdowns getting him on the board in the NFL.

Despite Mariota drawing first blood in what will no doubt be a long-storied battle between the two often-compared play-callers, it’s only a matter of time before Winston makes his mark in the NFL.