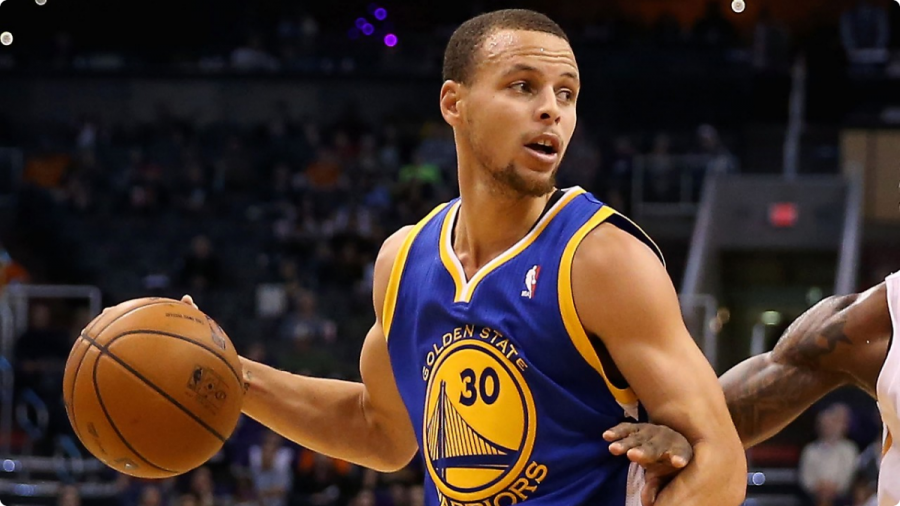 The 2014-15 NBA MVP race is one of the closest in years, with a range of stars emerging from under the dominant shadows of LeBron James and Kevin Durant. We take a look at some of the big names, freakish athletes, and emerging talents taking one of the world’s biggest sporting leagues by the scruff of the neck…

The best player in the best team, Curry boasts some of the best handles in the game, as well as unquestionable skill from deep or close, and elite agility. Averaging 3.6 3-pointers a game, Curry is the #1 3-point shooter in the League, evident by his clinical display in the All Star Weekend 3 point contest, and by breaking his own record for most 3’s ever in a season. He is also 6th for assists and overall points, as well as 4th for steals – proving his worth offensively and defensively. Curry’s passing and long range shooting are highlights of his game, and equipped with incredible dribbling ability he is truly mesmerizing to watch. According to the Bleacher Report, Curry also recorded 59.4 effective field goal percentage. This stat puts him ahead of the rest of the MVP race, something even more incredible when you consider it takes into account the signature long three’s he’s known for. Scarily, his already impressive stats could’ve been bigger if he had not sat out 18 final quarters. At the end of the day this is a teamsport, and over a gruelling 82 game season preservation is more important than domination. Curry’s dominance though, allowed the team to rest their stars, with their eyes on the end prize.

Affectionately known as “The Beard”, Harden averaged 27.4 PPG for the Rockets. Harden had been leading the scoring for most of the year until Westbrook’s run of incredible form took off. OKC fans will be left thinking what could’ve been if they still had Harden (pick 3 in the 2009 draft for OKC) lining up alongside Westbrook and Durant. Like Westbrook, Harden has carried his team for most of the year, especially in the absence of the injured Dwight Howard, and at times key member Patrick Beverley. Harden is deadly from outside of the arc (fifth in the NBA from 3 pointers made), and boasts one of the best ankle-breaking step-back-3’s in the game. Harden is second in the league for triple doubles with 4, and number one for free throws made. This means that even when teams intentionally foul Harden before he can get to hoop he’s still hurting them. His final triple double of the year which came in the last game of the season helped Houston take number 2 seed for the play-offs, as well as winning their first division title since 1994. As the playoffs begin, the question is whether or not Harden can reach an even higher playing level to allow the Rockets to be a genuine title chance in the absence of key team members.

After a slow start the King is back to his dominating best, and bringing with him the new look Cleveland Cavaliers team. The most influential player in the league returned like the Prodigal Son to Cleveland, the team he left dwindling when he chose to go to Miami in 2010. To put it into perspective, it’s akin to Gary Ablett (pre-shoulder injury) winning two premierships with the Suns then returning back to Geelong – only if Geelong were more like Melbourne. LeBron wants to be great, and if he can bring the titles to a long struggling franchise he’s forging a legacy of his own, helping him to stand out from the likes of Jordan and Kobe Bryant. The King is elite in every major facet of the game, scoring, defence, and assists. What makes him remarkable is he is still able to average 25.3 PPG, while sharing the ball enough to allow players such as Kyrie Irving to put up franchise record numbers. LeBron is one of the most selfless players in the competition, and a proven performer on the big stage, his leadership cannot be questioned, but his greatness will be proven by how far he can lead an inexperienced team into the finals.

This years scoring champion averaged 28.1 points per game while also collecting 11 triple double’s, seven more than the next best, fellow MVP candidate James Harden. In the last 30 years the only players to average 33 points/10 rebounds/10 assists are Michael Jordan and Russell Westbrook. What makes Westbrook’s run of form even more incredible was that for some time he was doing it with a broken cheekbone. He is also the first man to post three consecutive 40 point plus games in OKC/Seattle Supersonics history. Averaging 28.1 PPG, 7.3 rebounds, and 8.6 assists, Westbrook literally carried the team in the absence of last year’s winner Kevin Durant, and defensive anchor Serge Ibaka. Westbrook is one of the most explosive athletes in the world, and possibly the most explosive in a league full of them. However, basketball is a team game, and counting against Westbrook is the fact that the Thunder have missed out on the play-offs.

While the race is really only truly down to four candidates, Davis’ contribution cannot go unnoticed in an injury interrupted year. Davis has single handedly dragged his team into the play-offs. Playing for the struggling New Orleans Pelicans (formerly the Hornets before owner Michael Jordan, winner of 5 season MVP’s and 6 finals MVP’s, took the name back to Charlotte) the former number 1 draft pick has come on quicker than anyone thought possible, resulting in his first All Star nod. At age 22, Davis already holds the franchise record at New Orleans for blocked shots, averaging 2.94 and leading the league this season. He rebounds at a rate of 10.2 times a game on average. However it is the rate at which his offensive game has developed that pleases the Pelican’s the most, averaging 24.4 a game, including a game-winning buzzer beating three, Davis finished fourth in the league for scoring. Watch this space next season, his game of 36 points, 14 rebounds, 7 assists, and 9 blocks in a loss to the Denver Nuggets had never been done before. And the history making didn’t stop there, Davis is the only man ever to post an average of 20 points, 10 rebounds, and 2 blocks per game. Right now, Anthony Davis is set to be the next genuine superstar of the NBA.