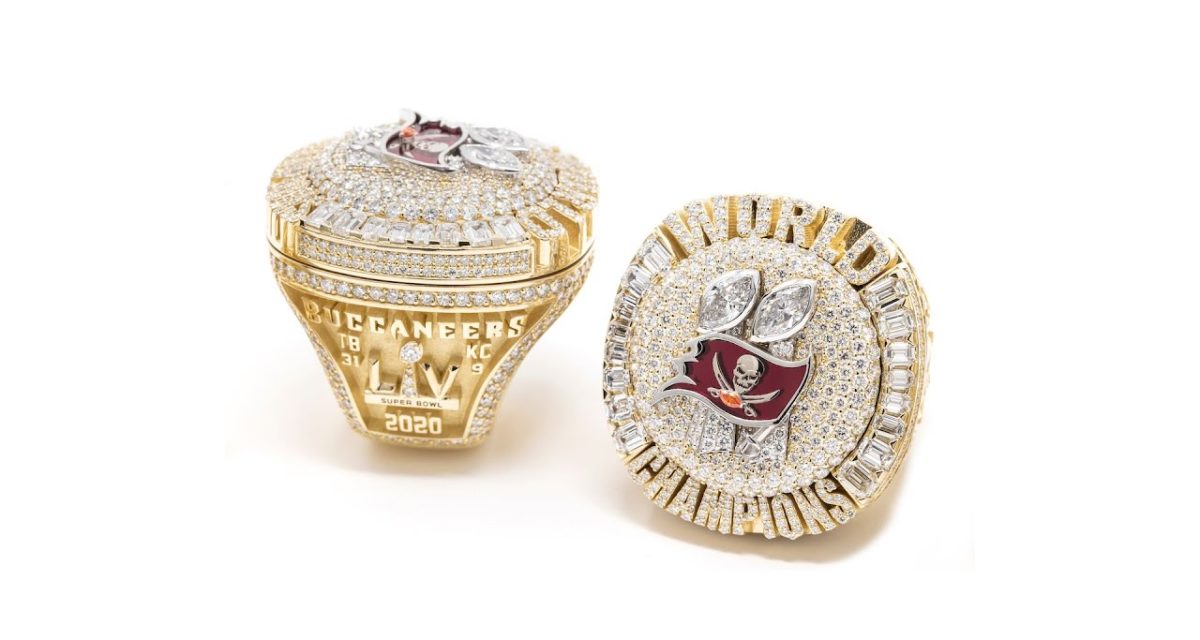 When legendary quarterback Tom Brady was asked about this year’s Super Bowl ring awarded to his Tampa Bay Buccaneers, he replied:

“I think this is by far the most incredible ring that’s ever been made.”

He of all people would know. With more rings than any single team in the entire NFL, the Super Bowl LV MVP is pretty much the closest thing to an authority on this subject.

This ring had particular significance to both Brady and the rest of the Bucs’. For Brady, his seventh ring at 43 years old without Bill Belichick cemented his legacy as the GOAT for many people, defying all claims he was nothing more than a system quarterback; for Tampa Bay, this marked the franchise’s second Super Bowl title ever and the first one to take place at the team’s home stadium.

The physical ring itself is certainly a sight to behold. With 15 carats of white diamond and 14-karat yellow and white gold, the Buccaneers’ Super Bowl LV rings are filled with special features and storytelling nods to this season within its design.

“From the beginning, there was one thing that was very clear to us. The Glazer family wanted to have the best Super Bowl ring in history,” said Jason Arasheben of Jason of Beverly Hills, the ring’s manufacturers.

Here is a closer look at those details:

Top of the Ring

The ring’s exterior top features two Lombardi Trophies and the team’s signature flag logo carved from a red stone spread across them. The two trophies commemorate both the Bucs’ most recent championship as well as their victory in Super Bowl XXXVII at the end of the 2002 season. Interestingly, the left trophy features nine diamonds in its base to symbolize the team’s incredible defensive performance in Super Bowl LV, where they only conceded nine points in total against Patrick Mahomes and the NFL’s highest-scoring offence.

The two trophies and the flag rest on a circular field containing hundreds of round diamonds. At the top and bottom of the field are the words “World Champions,” also encrusted with diamonds. Between those two words on the left and right are a band of eight emerald-cut diamonds on either side, a nod to the team’s playoff success.

“The number eight represents the last eight wins of the year, which were pretty important for us,” said Ali Marpet, one of the Bucs’ players involved in the ring design process.

“We had some incredible playoff wins on the road. We just wanted to have something symbolizing eight, and we have eight diamonds on each side representing those eight wins.”

All up, there are 319 diamonds on the exterior top of the ring. This oddly specific number is meant to evoke the final score of Super Bowl LV, in which the Buccaneers won 31-9 and were the third Super Bowl team to hold its opponents without a touchdown.

Inside the Removable Top

The Bucs’ new rings are unique in Super Bowl history in that they are the first to feature a twist-off removable exterior top. This portion of the ring is largely focused on Tampa Bay’s historic achievement of winning the Super Bowl in its own home stadium, which is why it has that exact word – HISTORIC – is laser-etched in gold here.

Surrounding that word is a description of exactly what the Bucs have accomplished:

“February 7th 2021 NFL history was made when the Tampa Bay Buccaneers became the first team to win the Super Bowl at home in Raymond James Stadium.”

“What the team did will last forever,” said Buccaneers Co-owner Darcie Glazer Kassewitz.

“It’s an accomplishment that no one has ever achieved before. For everyone who wears it, this ring will also last forever as a reminder that they blazed a new trail in the NFL and they did it as a unified team.”

But the boldest aspect of these rings is without question the lifelike Raymond James Stadium replica that greets the wearer when the top is twisted off. Once opened, you are drawn immediately to a single diamond placed in a field of gold, intentionally placed by the tunnel through which Buccaneer players ran from onto the stadium turf to begin their Super Bowl quest.

“At our tunnel, you’ve got one diamond; that basically represents us being the first team to win the Super Bowl in our home stadium,” said Lavonte David.

“It’s an awesome display, very, very creative, and it’s lovely to look at.”

Around the top of the stadium on each of the four sides is a display of game scores. These are the scores by which Tampa Bay beat Washington, New Orleans, Green Bay and Kansas City on the way to the title. The Bucs are only the fifth team in 55 Super Bowl seasons to win three straight games on the road in order to get to the final contest.

“We all as leaders of the team felt like the most significant thing that we had done was what we did in the playoffs,” said Tom Brady.

“We went on the road to three opposing stadiums and won, which is very difficult to do. I’ll never forget getting off the plane after Green Bay and landing. It was at night, we got off, we’re right at the airport and we looked over and we could see the red lights around our stadium at home. It was kind of like, ‘Man, we’re going to play in the Super Bowl in our own stadium.'”

Player Side of Band

One side of the ring’s band is inscribed with the last name of the person receiving the ring. Below the name for players is their jersey number; for others, the NFL logo is beneath their name. At the bottom is the team’s motto: “One Team, One Cause.”

The inclusion of the players’ names was critical because it recognizes that the rings, more so than any other bit of memorabilia, are the item that will forever connect those players to their shared accomplishment. Brady’s ring features its own specific mention to his Super Bowl MVP performance, where he threw 21 of 29 pass attempts for 201 yards with three touchdowns and zero interceptions.

“They’re not so much rings, they’re more like trophies that you wear on your finger. It’s a commemoration of all the blood, sweat, and tears we put into the season. Everyone thinks it’s the trophy, which is an amazing thing for the team, but the ring’s something we get to take and show our family and our friends.”

Team Side of Band

The other side of the ring’s band is devoted to the team as a whole. Along the top is the team’s name and below that is the Super Bowl LV logo flanked by the score of the game. At the bottom is the year in which all of this was accomplished, ‘2020’. Those are all straightforward facts about the team’s achievement but there is also a nod in the gems on that side of the ring to the Bucs’ playoff journey.

This particular side also depicts four diamonds set into the Super Bowl trophy, which are said to represent the four playoff wins achieved by Tampa Bay on the way to winning the Super Bowl.

Inside the band, there are three words inscribed into the gold that are familiar to every Buccaneer. It is unclear who on the Bucs came up with this credo, but it is a sentiment that is said to have been felt by all involved, through what proved to be a challenging season.

“On the top of the inside of the ring it says, ‘Trust, Loyalty, Respect,’ and this is something that the entire team believed in throughout this whole year, something very important to the team and to the coaches,” said Kassewitz.

“We wanted to engrave it in a very personal place on the ring.”

And for Mr Brady, these three words would indeed bear significance. For a man that made it pretty clear that he wanted to retire a New England Patriot, being refused a multi-year deal by his coach of 18 years would not have sat right. Despite the six championships together, Belichick still didn’t feel comfortable betting the franchise’s future on a 42-year-old Tom Brady. His mistake. The ring is here to prove it. 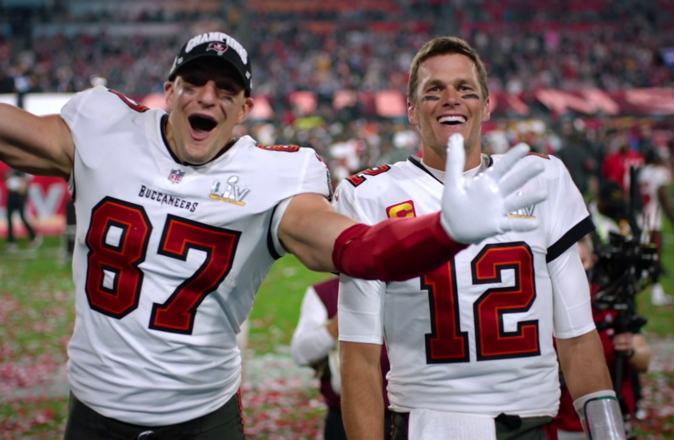 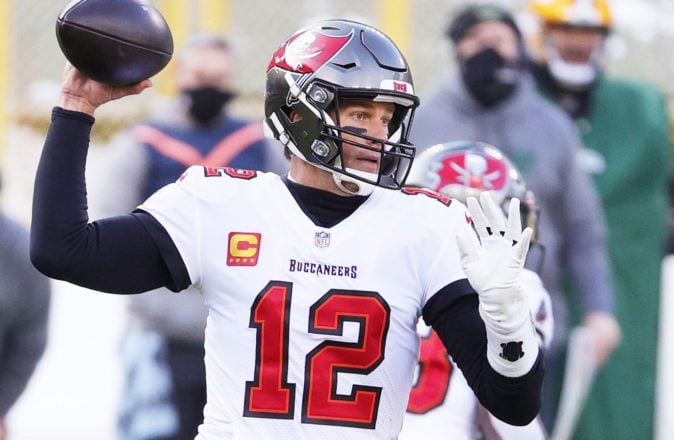 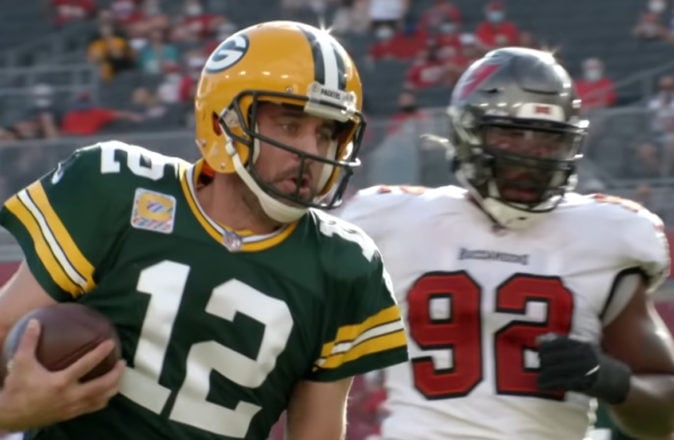