Legendary watchmaker Hamilton is remarkably prolific when it comes to Hollywood. The brand has appeared in roughly 500 films since 1930s, the most recent being Christopher Nolan mind-bender Tenent (Nolan also used a Hamilton for 2014’s Interstellar). Although now it seems another medium of entertainment is about to receive the Hamilton treatment, with the Pennsylvania-born timepiece maker set to debut the Hamilton Khaki Field Titanium Automatic as in-game gear for Ubisoft’s highly anticipated Far Cry 6.

The Hamilton x Far Cry 6 collaboration will mark one of the very few times such a high profile branded watch has made an appearance in a video game. It’s also the first time a branded watch has appeared in the iconic video game franchise, which begs the question why it took so long, especially since Hamilton’s Khaki Field collection is renowned for rugged, tried-and-tested military inspired watches. And Far Cry is hinged on the idea of military style action in exotic locations with theatrical plotlines.

Thanks to this new partnership, when Far Cry 6 finally releases this October, the video game’s protagonist will be wearing a unique Hamilton watch. The watchmaker will then be making the specific piece available in the real world, although a release date and pricing is yet to be confirmed.

Far Cry 6’s main character, Dani Rojas, will apparently receive the Hamilton Khaki Field Titanium Automatic as a gift for completing the game’s first mission. Much like other pieces in Hamilton’s Khaki Field collection, the watch will be defined by its army inspired design and precision functions, which players will – if previous Far Cry games are anything to go by – be able to engage with throughout the course of the game.

Rojas will obviously be needing the Hamilton Khaki Field Titanium Automatic too. In the game, the character is a guerrilla soldier fighting to liberate the fictional town of Yarra from the rule of El Presidente Anton Castillo ruthless dictator, portrayed in-game by Giancarlo Esposito (that is, Gus Fring from Breaking Bad and Better Call Saul).

According to The Hollywood Reporter, the Khaki Field Titanium Auto Watch will sport a brown leather strap and feature a Swiss-made movement with a power reserve of 80 hours. Based on the classic silhouette, the watch will feature a 42mm lightweight titanium case and players will be given the option to use the piece with or without the date.

Speaking on the integration of the Hamilton Khaki Field Titanium Automatic into Far Cry 6, Ubisoft Toronto’s game content director, Omar Bouali, described the watch as “in-game gear [that] not only looks fantastic, but also provides you gameplay benefits with a Far Cry twist.

“Every small detail is crucial when you’re creating a virtual world, whether it’s designed for the big screen or your personal game play”, said Hamilton CEO Vivian Stauffer.

“We are always at the cutting-edge of technology and it made sense to translate our experience in Hollywood to the world of video games. The Khaki Field Titanium Automatic is the perfect watch for the adventurous Far Cry 6 world and brings even more reality to the game’s story of revolution.”

The question then remains, when will Hamilton be releasing a physical version of the Far Cry 6 watch? Given the title launches worldwide (for Xbox Series X, Xbox One, PlayStation 5, PlayStation 4, Stadia and PC). 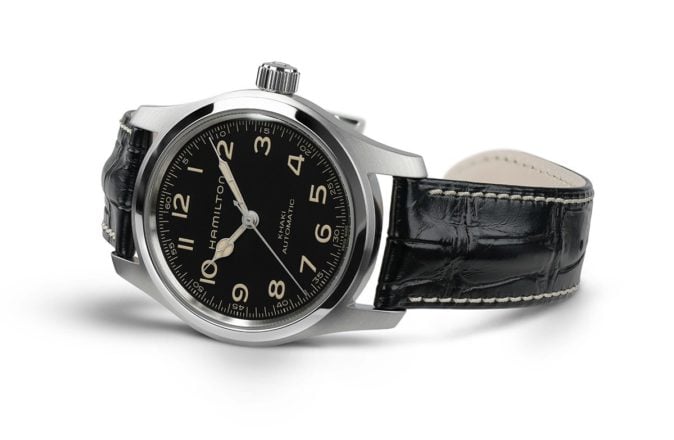