Running With The Bulls In Pamplona: What You Need To Know 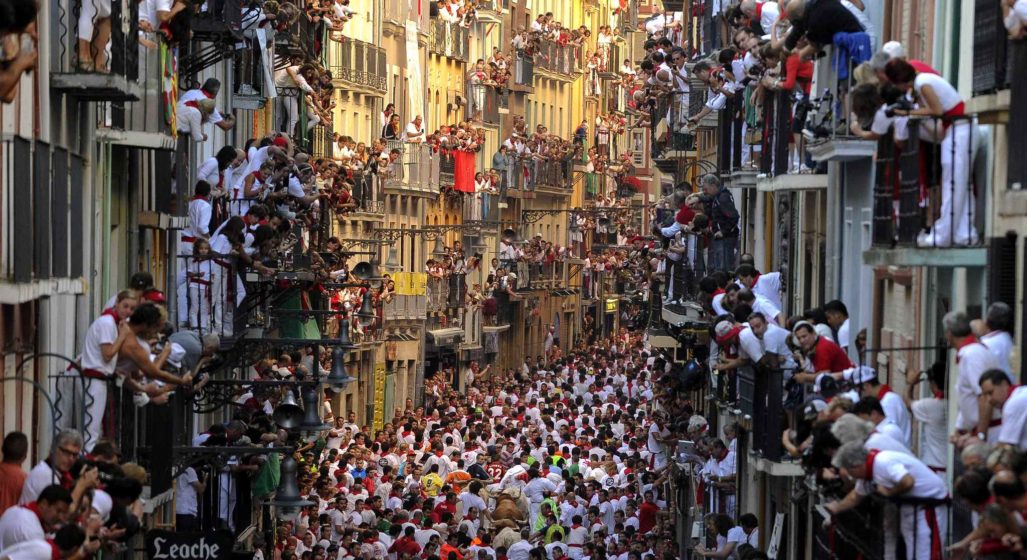 Why did I go to Pamplona to run with the bulls? Well, why not? It was hands down the most enthralling, alluring and electrifying festival I’ve ever been part of. Here’s my take and this is why San Fermin has to be at the top of your bucket list.

Taking a wander down to the start line I can see the bulls grazing in their pen. They’re somewhat peaceful looking, perhaps blissfully unaware of the events that are about to follow. Averaging 600 kilograms, the enormity of these raging beasts starts to become a reality. Six full-sized bulls accompanied by six steers, horns bigger than my arms and torsos that would rival a small car. The fragments of leftover alcohol give me enough confidence to dispel any thoughts of cold feet. I’ve come a long way for this.

Veterans take the necessary precautions, stretching and praying while the tourists and younger generation marvel in the experience of it all. You can take your starting point at any stage over the 875 metres. The narrow and inclined start is for the experts and those wanting the biggest thrill. I’m not so ambitious and take my position about 150 metres from the start line, just before the first tight bend.

As 8 am approaches, the tension accelerates. Side streets and shop windows are bordered up, the city now a designated race track. The local police perform their duties, ushering out those too intoxicated or incoherent to run. Phones and valuables are stowed away, it’s just us, the 12 large bulls and 875 metres of cobbled streets. Anticipation and excitement echoes all over the city.

As the hour ticks over, a loud BANG echoes over the city. The gates are open, there is no turning back now. Nerves sweep through the crowd, excited smiles replaced by faces white with fear. The second BANG fires indicating the bulls have passed the start line. The nervous faces now turn to each other looking for guidance and we all enter a brief state of panic.

People begin to turn and break into a jog, quickly transitioning into an all-out sprint within a couple of seconds. Pushing and shoving ensue as the bulls approach, only about 20 meters behind now. The crowd edges toward the side of the street trying to create a safe passage, some getting caught right in the middle. The bulls are now just a couple of meters away from me. Crashing their way through the crowd, leaving behind a wake of carnage, panic and exhilaration.

Just as soon as they had arrived, they were passed by us. The chasing quickly became the chased as the crowds charge after the bulls, somewhat more confident now that those piercing horns were facing the other way. As I run down the course, I take note of the fallen. The paramedics are already on hand to help the injured. At least half a dozen people were down receiving attention.

I enter the arena where the bulls have now been ushered into their pens. All previous fear and doubt are cast aside. I had run with the bulls and it was one of the best things I had ever done.

If you think that is where the fun ends you are hugely mistaken. The bull run is for San Fermin Festival what the halftime show is for the Super Bowl; a hugely hyped addition to what is already a titanic event. The barriers are deconstructed, the boards over windows are removed, the bars are opened and the fiesta continues.

Pamplona sits in the far north of Spain, just 60 kilometres from the French border. The city of 200,000 swells to well over a million during the San Fermin festival. Spanning from the 6th to the 14th of July, the place transforms into a non-stop party. All day and all night, revellers enjoy the celebrations. Live music, parades, bullfighting, sport and fireworks are all just part of the action.

People of all ages spill into the streets of the charming old town, creating a vibe and atmosphere incomparable to anything I had previously experienced. You’ll note everything from marching bands and drunk grandmothers to basement clubs and dancing on tables. All day and all night. The fiesta continues, right until midnight on the 14 of July when the city of Pamplona can finally rest.

Know Before You Go

San Fermin isn’t for the faint-hearted. Every year, dozens are injured and in some cases, there are fatalities. Keep your cool, follow these tips and don’t push the boundaries. That being said, this is one of the best things I have ever done! Enjoy yourself, embrace it all and tick this one off the bucket list.