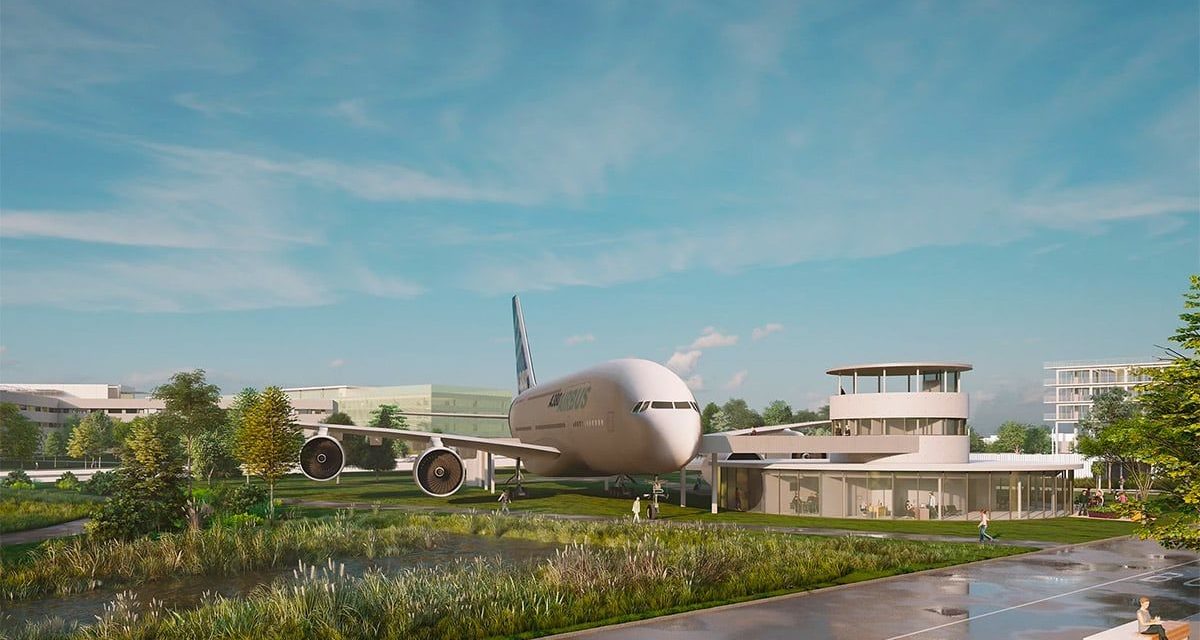 It’s hard to picture an old Airbus A380 as a 31-room hotel, but that’s precisely what aircraft engineer Airbus Frédéric Deleuze envisions with new three-star property Envergure (“wingspan” in English). To be located in the French city of Toulouse, Envergure is an ambitious adaptive reuse project that will see the retired aircraft saved from the scrap heap and reimagined as the unique accommodation by Deleuze along with lauded French real estate developers Groupe Duval.

With plans including a 60-seat restaurant and a one-of-one cockpit suite, the Envergure A380 hotel will be parked up in the northern section of Toulouse-Blagnac Airport, adding another layer of aviation history to an area that already includes the city’s Aeroscopia aviation museum, as well as the MEETT Toulouse Exhibition and Convention Centre.

Deleuze, who spent 15 years at Airbus, won’t exactly have an entire building to work with, as is typical with your standard hotel. While the A380 is known for its immense size, there’s only so much space you could carve out with the widebody jet. Rooms will reportedly be as petite as 16-square-metres and spread across Standard, Deluxe, and Suite categories. Deluxe rooms will reportedly be large enough for four guests.

The A380 hotel will have two suites located at the front and rear of the fuselage, one making use of the aircraft’s original stairs for a duplex, while the Cockpit Suite will feature a king-sized bed and a premium bathroom with a freestanding bathtub. Both will measure in at 35-square-metres each.

That 60-seat restaurant I mentioned above won’t be located onboard, however. An annex building stands nearby the aircraft, where is where both the restaurant and hotel reception will be located.

RELATED: There’s A Secret Apartment Atop The Eiffel Tower

While the other A380s are continually being capped at aircraft boneyards around the world, this particular aircraft will meet a more dignified end and become part of one of the travel industry’s most interesting adaptive reuse projects where aviation is concerned. We’ve already seen one of JFK’s abandoned terminals turned into an award-winning luxury hotel in New York, but to tighten the scope with the world’s largest jumbo jet is infinitely more fascinating. And that’s regardless of whether or not Envergure turns out to be as lush and spacious as JFK’s TWA Hotel.

The hotel could open as early as 2024, assuming Deleuze finds an appropriate A380 soon. Reportedly, the engineer is still searching for the right A380 and hopes that work will begin on the hotel later this year.

According to Executive Traveller, Deleuze cites a meeting with Airbus on the environmental impacts of dismantling an A380 as the initial inspiration for the hotel, tapping into the importance of a circular economy and the trend of upcycling which is still picking up in the global travel industry.

Notably, this won’t be the first aircraft hotel if it does indeed become a reality. That honour belongs to Jumbo Stay in Stockholm, although that hotel doesn’t look particularly spacious despite it being housed in a former Boeing 747-212B.

It is still unclear which airline will be supplying the A380. Emirates is known as the world’s largest A380 operator, once boasting 123 of the superjumbos in its fleet. Undoubtedly, Deleuze will be hitting them up first before other A380 operators like Qantas, Singapore Airlines, Qatar Airways, and British Airways – all carriers that have bought, or are bringing, some of their A380s back into circulation as a response to supply shortage.

Throughout its 18 year production run from 2003 to 2021, Airbus built and distributed a total of 254 of the A380 widebody jets. There’s little doubt Deleuze will come across one soon enough so he can start executing the plans for this unusual aircraft hotel.

Pricing hasn’t been confirmed, but it’s being assumed a night in Envergure should start at around $161 per night.