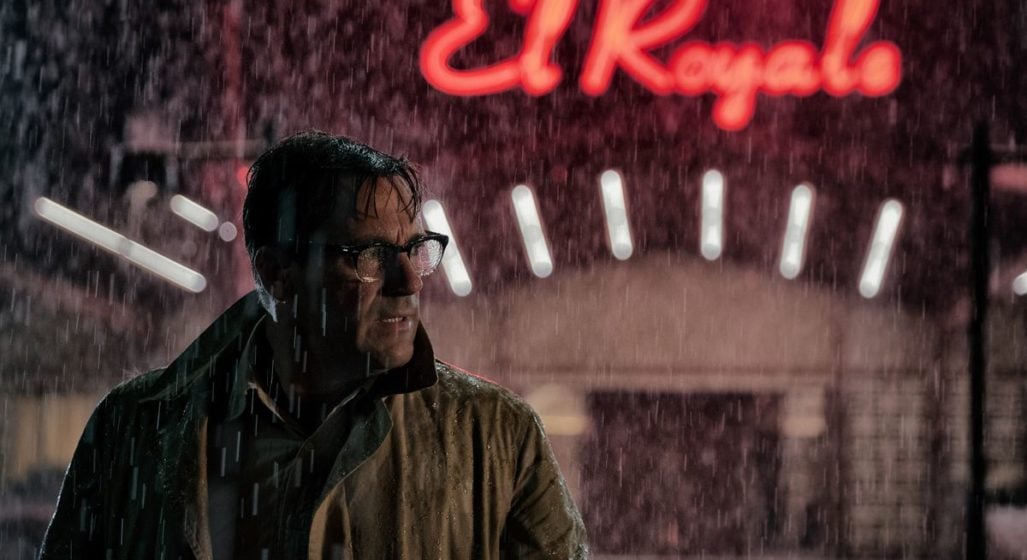 If there’s one film every Tarantino fan needs to watch this year, it’s Drew Goddard’s Bad Times at the El Royale. On one hand, it’s a gory, at times needlessly violent, and panicked sprawl of a cinematic affair. But on the other, it’s a layered on-screen investigation of humanity with character development that’s both beautiful and unapologetic at every beat. And then there’s the whole underlying metaphor representing purgatory, but we’ll get to that later.

Spoilers ahead, proceed at your own discretion.

The legacy of Tarantino

As the hook of this article indicates, there’s certainly a Tarantino flair to the film. Beyond the stylism, which feels like a punch to the face right from the start, it exists in the very machinery of this cinematic engine.

The non-linear structure of events. The murky exploration of morality. The slow reveal of character intention and backstory. The use of direct and chain consequence. Dialogue heavy tension that culminates in a bloody resolution. The killer nostalgic soundtrack. There’s even a certain item discovered along the way remarkable similar to the mystery suitcase in Pulp Fiction. And while you could probably figure out what it is, or more appropriately who is recorded on said item, it serves the story better to let speculation run free.

The most obvious/specific comparison drawn between Bad Times at the El Royale and the oeuvre of Tarantino is that of The Hateful Eight. After all, this is a mystery thriller confined within a single setting, driven by the history and intersecting motivations of each stranger leading to a definite end. But really, one could argue it’s a pastiche of a few more works. For example:

I could break this down ad nauseam, but it’s just one of those things that’ll instantly click when you experience it yourself.

A tremendous work in its own right

That being said, it truly is a tremendous work in its own right. Now I understand this may seem contradictory to the section above, but Bad Times at the El Royale does in fact function independently to the forms and devices employed by Tarantino himself. It might even function better as a film is you don’t make this comparison at all… but I thought this headline was too killer to dismiss and wanted to write this out, so here: have a half-sincere apology.

Setting aside the Tarantino of it all, Bad Times draws a surprising amount of inspiration from the crime-mystery novels of Agatha Christie. Though it would be reductive to categorise this as a complete whodunnit. This is more like a… whydunnit (not a word, moving on). As the old adage goes, everyone’s got a secret. And these ones just might get the person next to you killed.

Yet another key strength is how it manages expectations. It outlines the conventional, acknowledges the conventional, convinces you that you’re en route to the conventional, before smacking you upside the head with the unexpected. Subverting the well established grooves of where you and I think the direction of the film is going. As an audience member, you’re never bored. Just increasingly curious.

Side note: you also really come to realise how insane the concept of publicly available accommodation really is. A whole lot of strangers just inhabiting one space, completely unaware of what the person next door is planning. All that’s separating you from a chest full of bullets is a couple inches of wall.

There are some out there who are shooting this film down before its really even given a chance to take flight. Common criticisms include that it’s drawn out, superficial, and without a message. And while I can see where they’re coming from, I have to say… they’re dead wrong.

Yes, it requires a measure of patience to make it through to the end. But there’s never really a wasted minute. The screenplay is tight. Every pause, every seemingly arbitrary flashback, serves an actual purpose. These confusing moments gradually accumulate for a pay off in the third act.

Yes, it takes some notes from the Tarantino book of stylism. But this isn’t a half baked attempt, and goes beneath the skin of the story; a story that’s self-sustaining enough in terms of intrigue that you’re compelled to see it through.

As for the message? Well, if you can’t recall a single lesson regarding the pantomime of human morality we as a collective play along with, a pantomime that barely separates us from the primates of which we descended from, then you clearly weren’t paying attention. Which also brings me to the final section of this long-winded love letter.

What you’re about to read will be painfully obvious for some and a revelation for others. So for the sake of the former, I’ll keep it brief:

And just to really drive this one home, Jean-Paul Sartre once said “Hell is other people”.

Bad Times at the El Royale is now showing in cinemas. Check it out.