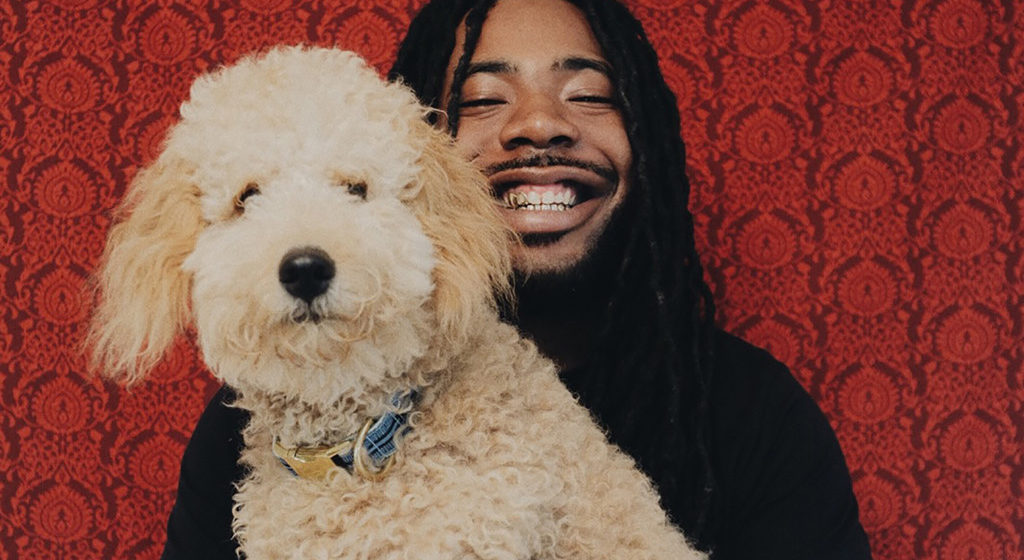 Big Baby DRAM is truly one of a kind in the rap game. With his happy go-lucky positivity, his extremely naturalistic flow when it comes to music making, and his unwillingness to be categorised in a neat box, the US talent will soon be hitting Australia for Falls Festival. We sat down with him to talk feeling good, his influences that span from funk artists like George Clinton to the von Trapps, and excitement levels in anticipation of heading Down Under.

Something that sets you apart form most rappers these days is how positive and upbeat your music is. Not just the instrumental, but the lyrics, the message, even the music video. Did you decide to do this right from the beginning or was it a development over time?

OK so listen. I’m me, you feel me? So I’m just giving you me. And I feel like, man, when you go into a room. And you’re just living it up, you give off your good vibes, nine times out of ten, it’s going to come back to you. I’m a human being. And I go through the same thing that everybody goes through, your ups and downs. That’s what you got LPs for, you got whole projects. To give your whole “thing” out there… I do feel as though the most positive facet of Big Baby is that feel good. I want you to feel good, man. C’mon man. It definitely wasn’t like a plan, or an equation… It’s off the hip.

And there’s definitely a movement going on, with rappers like yourself, Lil Yachty, Kyle. It’s become sort of a genre in itself, something Yachty called “Bubblegum Trap”.

I’m going to stop you right there. And let you know I am my own artist. I am Big Baby DRAM. I am something that you would call an anomaly—if you’re going to try put your finger on something. Don’t do that. Don’t do that.

Do you foresee a more positive approach to hip-hop, is what I was getting at.

I don’t know. IDK. This is the most popular art form in the world, right now. So that’s it.

So you spoke a lot about the individuality of yourself and your style. What do you cite as your major influences?

Shoutout to the captain of the mothership himself, George Clinton. Because he is the top of the family tree, of my musical influences. Shoutout to the big homie, the OG. You feel me? And all of my other great influences, it’s amazing. They’re all influenced by him as well, including Andre 3000, who I feel is the greatest rapper of all time, Kendrick Lamar, who I feel is the greatest rapper of this generation, Erykah Badu, who is queen, D’Angelo, music’s soul child. Also growing up, musicals. Big part of my childhood. Used to watch them almost every day. My favourite musical is The Sound of Music. [Sings.] “The hills are alive, with the sound of music!” [Speaks.] Do you know about the Fräulein?

I do, there’s an old VHS tape in my draw somewhere that I’ve worn out.

That’s the crew, man. The von Trapp singing crew… For me, it’s in everything, man. Commercials, any jingle. Any melody. Music, in general. I can hear the door close. Or the [sounds when] you leave the door open when you’re in an argument, and they ain’t shut the door yet. It’s like, “I got a little idea for that.” Shoutout to the family tree.

In the span of a few years, you’ve worked with a ton of huge talent. Who do you want to work with next? Do you have a collaboration hitlist/wishlist?

Yo, Stevie Wonder, man… The live rendition of Ribbon in the Sky, it’s amazing. That little bit at the end. That shit is hard.

You’re about to head down here in Australia for Falls Festival. What are the excitement levels with you like right now?

I’m just ready for the energy, man. I’m ready to see how the vibrations are. And getting to see the scenery while we ride to the next spot. It’s just amazing. I’m very, very grateful, and honoured to be part of the festivities. I heard that around this time of the year, it’s really big. For like music, and shows, and festivals. This shit has got me hyped, man.

Are you going to bring your dog, Idnit?

That’s such a shame. We’d love to see him on stage, and the dog parks here are pretty tight.

I know, I know, I know. But I’ll put some content on my IG. And I’ll have him upload some on his. @idnitsocute on Instagram and Twitter. He’s got a mind of his own. I do not run his account. I do not know how his little paws can tweet those tweets.

You can catch DRAM at Falls Festival from December 28th of this year to January 7th of 2018. DRAM will also be playing at a sideshow in Melbourne only come January 5th.