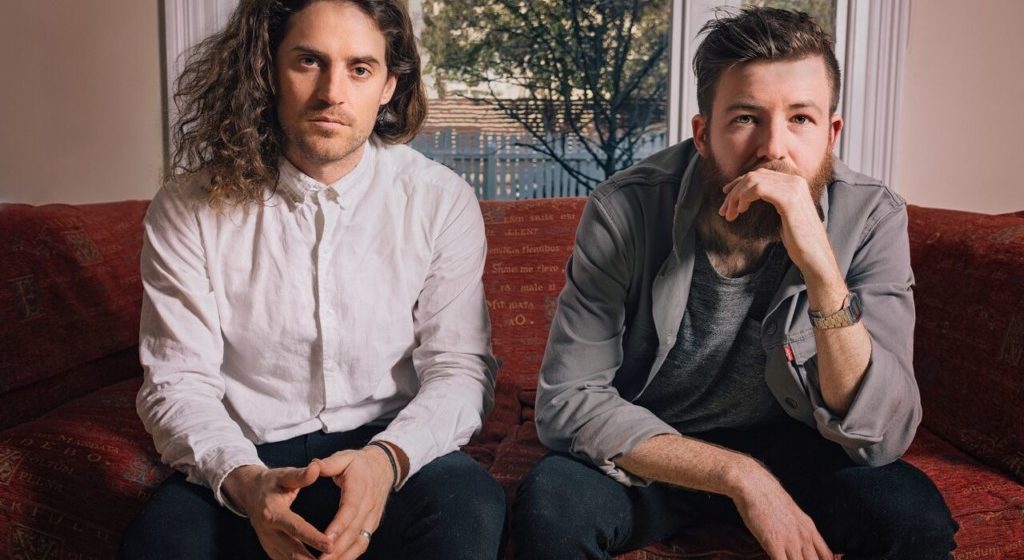 Powerhouse ensemble, Holy Holy, are set to hit Australia at all the major stops, and a few regional venues in between. We sat down with the talented Timothy Carroll to talk the life of a travelling musician, coming together as a band, and the vital role lyricism plays at the heart of music. Check out this exclusive premiere video of the boys performing True Lovers live.

With the release of your latest album, you’re about to embark on a national tour. Do you ever have any expectations when you hit the road, and do you have any this time around?

I’m looking forward to this tour, we’re playing some fun rooms. Like The Triffid in Brisbane is a great room, and in Melbourne we’re going up to a bigger venue… the biggest venue we’ve played in Melbourne so far, 170 Russell… Sydney we’re playing The Factory which we haven’t played either, so there’s some fun rooms and some cool little regionals as well. It’ll be the first time we’ll be sort of playing the full album, the full Paint record live, so at the moment we’re sending e-mails back and forth and getting into that, you know, how exactly we’ll approach and what parts we’ll include. How we’ll play the different songs. Because that’s kind of a feature of us as a band, we have one approach in the studio and when it comes to live, we have to kind of sit down and work out how we’re going to actually make it happen live. Everyone’s kind of… a lot of people in the band… are multitalented and able to do a few things at once so, we’ll work it out.

Of course being on the road is nothing new to you, even before all this. The formation of Holy Holy itself being steeped in travel abroad. Did this initially untethered dynamic have any major effects on the organisation of it all, or the music?

It’s interesting for me. I used to perform as a solo artist, so I used to travel around a bit, and tour a bit, so obviously quite different. Holy Holy’s the first band I’ve ever been a part of. For me it’s kind of normal, it’s always been from the beginning, we were living in different cities in Europe, and then we came back to Australia, and we were living in different cities in Australia. So I’ve never known what it would be like to, you know, just be around the corner of the bandmate, and be like, “Hey, do you want to catch up, and have a rehearsal?” I mean, sometimes I do crave that, and there are certain times when you really want to get in a room, and try an idea out. Or just have a little rehearsal, blow off some steam or something. But, like I said, I feel like for me, what’s more important than being physically close to other artists is finding artists who you enjoy playing with, and who really bring something to the band. Have certain skills that are complimentary to the other members. I think the nice thing about Holy Holy is each member has their own little area of expertise… My thing is mainly lyrics and vocal melodies… Oscar does the guitar solo and guitar writing, but he’s also really involved in developing the arrangements, and he’s a good man for restructuring various progressions… Matt our producer, who’s now our keyboard player, he’s a lot about tones, and tweaking the amps and the pedals… And then our bass player Graham, he’s also a good man for feedback on arrangements but also a solid bass player… really groovy and tight with the time and everything… I feel really lucky to have found all those guys… I’m kind of willing to sacrifice the convenience of the fact that we don’t live in the same place, because I feel like it’s worth it. And we’ve found a sound that works for us.

Does the constant momentum of moving from place to place invigorate your creativity?

To be honest with you, I think creativity can come from all kinds of places. Sometimes being at home and being really settled, relaxed, having time to write is really good, and sometimes being really strung out and hungover, tired, can also be a great time to write. I actually think that for me, and I think this would be true for other people too, the main barrier for creativity is all just time, and like, the nuts and bolts of life getting in the way. “I’ve got to go to work, then I’ve got to do this washing, make dinner, then I’ve got to meet with this person and stuff.” Life just kind of ticks along and you don’t make the time… I’ve heard stories of Nick Cave who has like an office where he has instruments and recording equipment and so on, and he just goes in, you know, in the morning, nine o’clock, and is just at work, where he’s writing, trying sounds and stuff. Kind of plugs away like an accountant plugs away at their work. I think that’s an interesting kind of approach.

The lyricism in your songs has this refreshing air of sophistication about it. It doesn’t fall into the modern era traps of being too vague, or too on the nose. It dances on this line of being poetic. Tracks such as Impossible Like You paints a biblical narrative, blistering with visceral emotion. Do you draw any inspiration from poetry?

Well thank you, first of all, for noticing that. No, to be honest, no. I have never been a big reader of poetry, which is sad really. I’m ashamed to admit it. I feel like, I don’t know about you, but it’s not very common in our lives. I never hear about people reading books of poetry, I wouldn’t really know where to begin… I mean I could go to a bookstore or a library… I guess it’s just something that I’ve never really known. Never really had much access to… I read a lot, especially when I was a young adult, and I think that has informed my lyrical approach… and certain key artists who I admired. Like Conor Oberst from Bright Eyes… before that I had been listening to other artists and I was like, “Oh yeah, I can kind of imagine that.”, and Conor Oberst was the first artist I listened to where I was like “Holy shit… that’s on another level.” And it felt like something way above any level I would be able to do. I kind of held him up as someone to aspire to, and when I’m writing I’m trying not to accept something that’s below a certain level… Keep re-drafting, find some way of putting the words… Because with song writing there’s the meaning, but there’s also the rhythm and the way that the syllables interact with the music and so on. So there’s multiple kind of tricks that you’re trying to achieve at once.

And finally, what do you hope people will derive from your music today, tomorrow, and ten years from now?

I use music a lot to influence my mood, or the control my mood, or to amplify my mood in some way. For me, music is like a mood setter. Sometimes when you’re sad, the nicest thing you can do is to find a really sad record and really get into it… I have certain records in my life that I’ll go back to again and again. And every time I hear them, I’m taken away by the music, I’m thinking about it, and I’m hearing new things each time… I want to make records that connect with people, and become a part of the soundtrack to their life… Good songs are a forever kind of thing, so if it doesn’t age well, then there’s something wrong with the core of it, I guess.

Tickets for their tour presented by triple j and supported by The Money War + Machine Age are on sale now. Be sure to check our their new album PAINT.