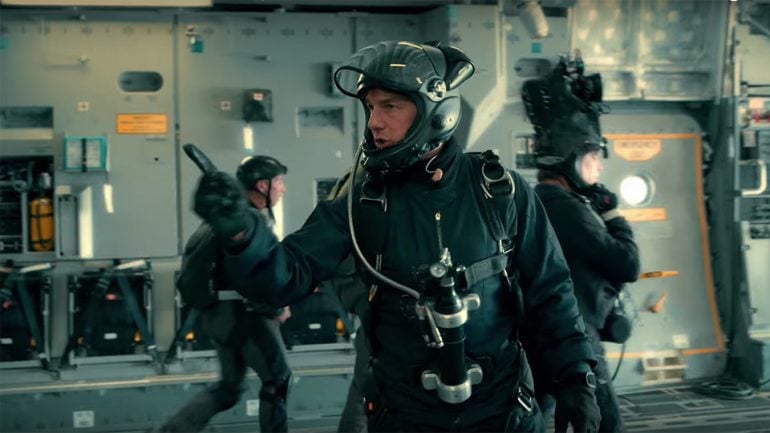 Anyone who’s familiar with the actor’s antics knows what I mean by that.

The debut trailer for Mission Impossible: Fallout honestly surprised me. After six outings across two decades, even I was thinking, “okay, surely this one has to be average.”

What I like about Tom Cruise is that he sets his own bar, and then goes on a mission to raise it time and time again. He’s a perfectionist that’ll train for hundreds of hours over two years for a helicopter sequence that probably won’t feature in the final film for more than three or four minutes.

The same can be said for the stunt in question. There’s a reason that the HALO (high altitude, low opening) jump is reserved for special forces and the elite of the elite. People train for years and years just to learn how to not die doing it, let alone film a blockbuster’s action sequence.

For one reason or another (we’ll find out when the film is released next month) Ethan Hunt (Cruise) finds himself hurtling towards earth from a height of 25,000 feet out the back of a C17 Globemaster.

Yes, it’s actually Tom Cruise, and yes, it’s about as complex a sequence as you’ll ever get in an action film. Before anyone had even left the ground, the choreography rehearsals took place in a specially built wind tunnel, one that Paramount Studios claim is one of the biggest ever made.

When the team took to the skies over the UAE, the dangers were real. Over 100 practice jumps were needed, with five a day from a small support plane, and then three each afternoon in the C17 (danger aside, just think how much it would cost to rent a C17 for a month).

With the threat of both hypoxia and the bends front of mind for the crew, the jump team needed 25 minutes of pressurization each flight before they could even take off. Cruise needed a special helmet designed to function as both a prop and his oxygen lifeline.

For every jump performed, only one of these, however, had the correct lighting for the film’s plotline. Meaning the crew had just a single, 3-minute window to perfect the shot each day right before the sunset.

Regardless how good this film may or may not end up being, Cruise will be the first actor to ever do a HALO jump on camera, so you’ve got to give the man some respect for his work ethic. Catch the sequence breakdown below.