WATCH: The ‘Mortal Kombat’ Opening Scene Is A Bloody 7 Minutes

Warner Bros. has offered up a taste of the forthcoming Mortal Kombat reboot by releasing its opening 7-minute scene. Making good on the promise first established by its gory fatality-rich trailer, punches certainly haven’t been pulled in this R-rated affair… to the point where you wonder how both the original trailer and opening scene hasn’t already been torpedoed by YouTube content guidelines.

The scene in question is a prologue to the main story. Without spoiling too much, it depicts a fast-paced showdown between Hanzo Hasashi / Scorpion of the Shirai Ryu clan (portrayed by Hiroyuki Sanada) and Bi-Han / Sub-Zero of the Lin Kuei assassins (portrayed by Joe Taslim), after a surprisingly emotional occurrence.

Mortal Kombat will focus on MMA fighter Cole Young (Lewis Tan), who lives blissfully unaware of his hidden lineage – while also being far too chill about his dragon-shaped birthmark – until Sub-Zero (Taslim) is sent by Emperor Shang Tsung (Chin Han) to neutralise him. Fearing for his family’s safety, Cole seeks out Sonya Blade (Jessica McNamee) at the direction of Special Forces Major Jackson “Jax” Briggs (Mehcad Brooks) who, incidentally, bears the exact same dragon marking Cole was born with.

RELATED: Marvel Drops A ‘Shang-Chi & The Legend Of The Ten Rings’ Trailer

Soon after, Cole arrives at the temple of Lord Raiden (Tadanobu Asano) – an Elder God and the protector of Earthrealm – who grants sanctuary to those bearing the dragon mark. There, our down-on-his-luck scrapper trains alongside the likes of Liu Kang (Ludi Lin), Kung Lao (Max Huang), Jax, Sonya Blade, as well as the rogue Aussie mercenary Kano (Josh Lawson) to unlock his “arcana”. But Earthrealm’s champions don’t exactly have the luxury of time, as it quickly becomes a race against the clock to prevent the malevolent Outerworld forces from claiming victory in this cosmic tournament and enslaving humanity.

The film has been written by Greg Russo and Dave Callaham. In the producer chairs, you’ll find James Wan, Todd Garner, E. Bennett Walsh, as well as director Simon McQuoid himself.

Mortal Kombat will hit cinemas around the country from April 22nd – watch the opening scene above. 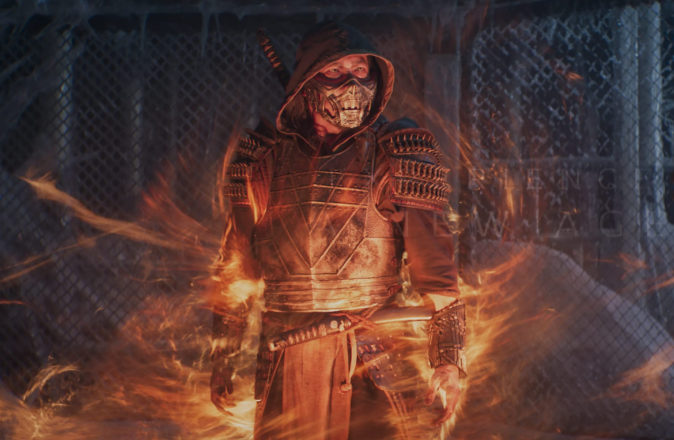 Not That Anyone Asked, But We’re Getting ‘Mortal Kombat 2’